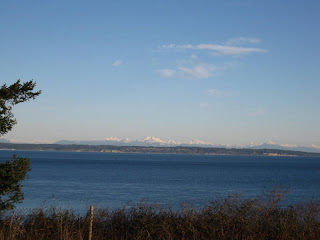 Today I begin my third week at Centrum. After that, when I've returned to the work that's been piling up at Aqueduct,I'll begin posting the annual Pleasures of Reading and Listening in 2010 series. We'll have contributions from many of our usual contributors as well as a few new ones.

I think I've said this before, but perhaps not. The idea of taking out a big block of time to work on a collection is proving as engaging as working on a novel. Obviously it's not necessary that one approach assembling collections in this way. Perhaps it's the inclusion of new material, some of which I've just finished writing, that makes me feel as though the body of stories is still full of living yeast and responsive to being punched and kneaded. I've a few more comments about the work at the end of the post. But first I want to catch up with my account, which I left off with on Thursday because I didn't have the time on Friday and Saturday to spare to go over to the wifi building (though I did jot notes for posts both days).

Friday began with a sunrise that streaked above a solid bank of clouds on the horizon in a burst of smooth, glassy flame. A grand start, but a couple of hours later, the cap that tops the bolt that constitutes the shower pull (the mechanism that sends the water up into the showerhead) came off the bolt, and the bolt, washer, and a mytserious piece of plastic into the tub. (Tom bought some metal epoxy and glued the cap on. He says it looks as though it had been glued once already.) Things picked up considerably, though, when I went for my walk mid-afternoon, when the tide was as high as I've seen it this year. The water was smooth, the air mild. And I immediately spotted three river otters, swimming in a line back and forth over the same area of water for the duration of my walk. Scattered far and wide were individual western grebes, each on their own, doing a lot of diving. One fairly close to shore caught a fish too big for it to handle-- I watched it struggle to shift the fish, which it had gripped in its beak, into the right position for swallowing, and it was having a hell of a time. I don't know if it finally succeeded, for all at once it dove beneath the surface, the fish still in its beak, and vanished. I of course looked for the horned puffins, and after a lot of work with the binoculars, found them, not far from the opposite shore. I've been curious about their swimming in single-file every time I've seen them, and this time as I watched them, I noticed that every now and then one of them would reverse direction, which the others then adapted to, so that the last puffin became the lead.

As for the ducks-- they were extremely busy. For one thing, many of them were dabbling while they were swimming (which I don't often see the ducks at Union Bay Fill do-- though perhaps they weren't actually swimming, but merely drifting with the current). And as with the grebes, they came in much closer to shore than they've been doing-- but tacking back and forth (with me walking quickly, trying to keep pace with them). Most fascinating, though, was their every so often rearing up (with their foreward momentum continuing) and then taking off, en masse, to another patch of water. They also tended to do their dives en masse, too-- one would dive, and then in quick succession all the rest would follow. This cluster, by the way, had an assortment of species-- several red-breasted merganser (see my extremely low-res photo), hooded mergansers (I just love the punk-look of the females, even though the males have the most spectacular markings), buffleheads, and harlequin ducks. It fascinates me that such an assortment of species have formed a group that synchronizes its diving, flying, and choice of location. It makes sense that many species of birds can share the same territory when the food is plentiful. And it's also easy to understand why certain birds flee when others (usually larger and sometimes immediate predators) arrive. (You should see the reaction of the waterfowl that happen to be in the cove at Union Bay when an osprey arrives in the sky above-- pretty similar, actually, to what happens when a woodpecker occupies a branch of a tree loaded with yellow warblers.) It's less obvious, though, how individuals of assorts species form social groups that effectively choreograph their group behavior.

Saturday was dazzlingly clear and sunny. All the mountains were out. The air was crisp, the water sparkling. Sun flooded my cabin (which has a row of southern-facing windows that runs the length of the cabin), and for a while, at least, it dispelled the feelings of deep unease that my story "Sadness Ineffable, Desire Ineluctable" fills me with when I work on it. The tide in the afternoon was again very high, but when I walked out onto the beach with Tom, we saw two river otters (in different places in the Inlet), grebes, a Pacific loon, and of course the puffins. The light cast an alpen glow over everything with a pale color. Apart from the walk on the beach, we spent much of the time talking, talking, talking. The sun hitting my cabin all day made it hot. But because the sky was clear, when the sun went down, the temperature dropped sharply. And then the stars came out. As Tom prepared to leave, we looked at Jupiter through the binoculars. It was wonderfully big and bright, but there were no signs of its moons.

When, finally, Tom started the drive back to Seattle, it dawned on me that I was starved for conversation and companionship. (But the only time I had any conversation the entire last week was when I visited the Centrum office to confer with the staff about the shower pin. Thinking back on it, I recall babbling madly about the sunrise and the river otters, which probably gave them the false impression that I'm a gregarious extrovert.) I'm going to do my best to maintain my isolation for this last week. But I can't help but think that having Tom's cell phone with me may pose a temptation.

This morning I enjoyed another spectacular sunrise as I made coffee and washed the dishes. The stories in the collection I'm assembling, I realized while watching the sunrise, span more than twenty years. There's always a risk that sf stories that are twenty years old will have become clunkily dated. I do have a few of those, which I'm happy to relegate to obscurity. Whether or not stories come to seem dated to the reader, though, I feel certain that any writer, revisiting stories after many years' absence, is bound to be aware of the (past) moment in which they were first composed. In the case of the stories I've chosen for this collection, as I work on each in turn, I find myself recollecting the cultural and political contexts of the moment in which they were written-- though I've more or less forgotten the details of my personal biography at those moments. (One of the stories was written in two parts--the inner level of the story was written in the late 1980s and very much feels 1980s-ish, while the frame story was written over the last few months and finished last week.) I can't help but be notice how differently some of these stories read out of their original particular moment. One story, which was the cover story for an issue of Asimov's in the late 1990s, now feels extremely radical (politically). That absolutely astonishes me. It shouldn't, but I can only conclude that I've deeply internalized the notion that what was radical in the past will eventually be middle-of-the-road-- though I distinctly remember discarding that idea when I was 23 years old. On the other hand, I suspect that the oldest story, which will now be published for the first time-- severely trimmed (by about 30%)-- may now be intelligible to more people than it probably was at the time I wrote it. (It is, in fact, more intelligible to me.) That is, perhaps, the flip side of stories dating. Some stories do take awhile to grow into their proper age. Writers who haven't been working for thirty years may not realize that. (Not that every story put in a drawer is likely to have been born prematurely... I'm just saying.)
Posted by Timmi Duchamp at 2:38 PM