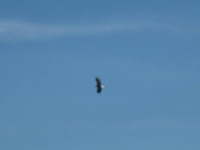 I spent some time at the Union Bay fill this afternoon. All the ponds that dried up in the summer are once again good places for waterfowl to hang out, and water has seeped into the ground just about everywhere, making walking a squishy and swampy affair. (Three cheers for my well waterproofed boots!) The bare trees and bushes are striking, even beautiful in the strange December sunlight. But we didn't just enjoy the beauty of the landscape, for we found birds in most of the usual places. Best of all, standing at the edge of the lake, we were treated to a dramatic scene offshore when two bald eagles, flying low over the lake-- hunting-- made their entrance. The entrance was well-announced, for about half a minute before we spotted the eagles, all waterfowl on the lake but for the scores of coots that were crowded together in a long dense mass of bird bodies took off in a great exodus. Though the coots didn't fly away, they were clearly freaked out. They submerged their bodies except for the heads, which they jammed tightly up against one another. And then every half minute or so they'd shift, en masse, sometimes propelling themselves through the water (by moving their heads), sometimes rising up and flapping their wings, which made it look as though they were running on the surface of the water. First they moved, again and again, east. And then, when they'd apparently decided they didn't want to go farther east, they shifted west. And then back. But the eagles ignored the coots. They were interested in fish. After several minutes of circling, one of the eagles swooped to the surface and caught a fish and flew off with it to a pier on the far shore (visible through my binoculars), where it ate its catch while perching on a post. (No sharing here.) A crow perched near the eagle, keeping its beady eyes fixed on the eagle as it dined, obviously hoping for leftovers. 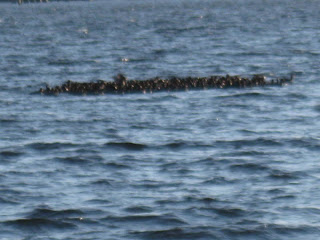