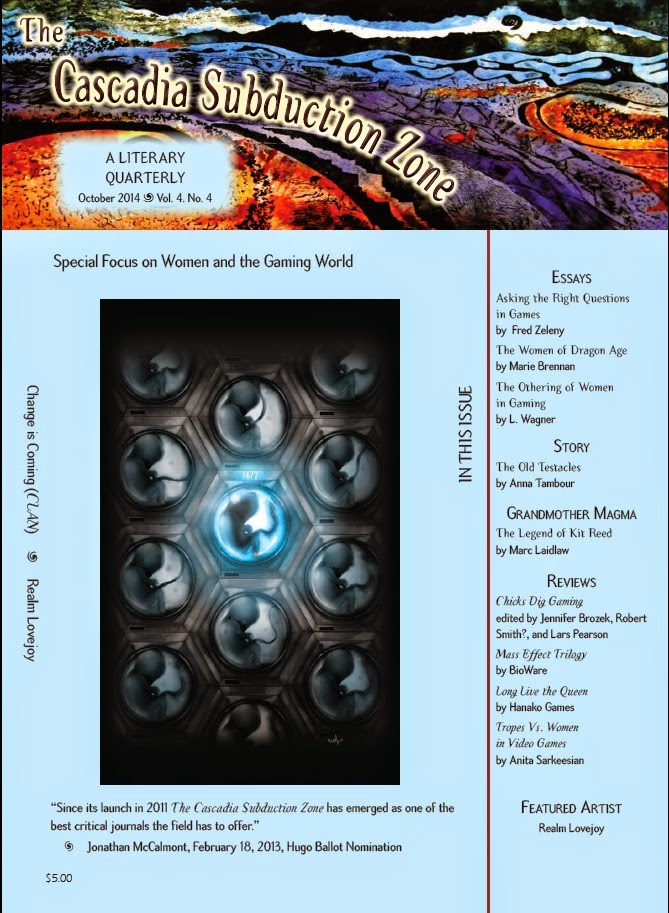 The Fall issue of The Cascadia Subduction Zone is out! This is one of our special focus issues, this time on Women and the Gaming World, brought to us by guest editor Diana Sherman. In addition to the special focus, the issue also brings us Marc Laidlaw's "The Legend of Kit Read" for our Grandmother Magma column and "The Old Testacles," a short story by Anna Tambour.

Here is the table of contents:

Essays
Asking the Right Questions in Games
by Fred Zeleny

The Women of Dragon Age
by Marie Brennan

The Othering of Women in Gaming
by L. Wagner

Grandmother Magma
The Legend of Kit Reed
by Marc Laidlaw

The digital version of the issue can be purchased for $3, the print version for $5, here
Posted by Timmi Duchamp at 11:36 AM No comments:


I've understood for a long time-- sometimes it seems like forever-- that many (though obviously not all) instances of sexual harassment invoke, often unconsciously, the binary formula that has its roots in patriarchal social organization, viz., the notion that public space is for men's business and play and that "decent," "respectable" women will stay secluded in the private spaces unless adequately shielded by a man's protection. As a graduate student in history, medieval and early modern Florence provided a perfect model for understanding this. The prostitute was the prototype for women who lived and worked in public space: a sexualized commodity, available to anyone. A woman without male protection must necessarily expect to be insulted if not assaulted.

Later, in the mid-1990s, I read Catherine Gallagher’s inteteresting Nobody’s Story: The Vanishing Acts of Women Writers in the Marketplace 1670-1820, and my understanding of the connection developed considerably. I’d long been familiar with the anecdotes about the woman who delivered lectures on the law at the University of Bologna from behind a screen to conceal her identity and thus protect her identity, and knew that very few women in the late medieval and early modern world dared to publish their work under their own names. (Marie de France, Christine de Pizan, Artemesia Gentilleschi, and Margaret Cavendish, brilliant exceptions to the rule, stand out as outliers in their audacity and even pride in doing so.) But I didn’t entirely get it until I read Gallagher’s book. Gallagher’s book looks at the development of authorial personae in fiction by women writers in England, dating roughly from Aphra Behn to Maria Edgeworth. Both male and female authors, she suggests, “in quite dissimilar social and economic conditions and across a range of discourses, portrayed themselves as dispossessed, in debt, and on the brink of disembodiment…. [A]uthors of both sexes called attention to their existence in and through their commodification and their inseparability from it. The rhetoric of female authorship differs, in this regard, from that of authorship in general by exaggerating and sexualizing the common theme….As authors, they imply, they themselves are effects of exchange. They do not present their texts as places where they have stored themselves, nor do they portray their authorship as an originary act of creation….Indeed, these authors commonly figured their labor as the accumulation of credit rather than the production of property.” Aphra Behn and her open, public success as a woman writing marked the beginning, really, of Anglophone women publicly claiming authorship (which in her case included writing plays that were publicly performed). And how did Behn fashion that public authorial persona? Gallagher examines how she audaciously used “the metaphor of the author as prostitute to create distinctions between the obliging playwright and the withholding private person, the woman’s body and her self, the stage and real life.” Behn did this as a way in to a role previously reserved for men, allowing the many writing women who followed to fashion other (“feminine”) means for becoming public—ie.,writing—subjects.

It's been about two decades since I was informed by an sf editor editing one of my essays that the "sexual double standard" is "dead." Really? One of the social premises underlying many instances of sexual harassment is that any woman venturing into public space is subject to sexualization. That is why, of course, women who dare to speak in public space so often become targets for elaborately vicious rape threats. Or slut shaming. Or "doxxing."  Remember the English proverb, "Caesar's wife must be above suspicion"? Women daring to negotiate public spaces (which include, of course, the workplace) are effectively in the position of Caesar’s wife. It's an impossible position for anyone claiming full public subjectivity, of course, since merely pointing out her possession of a vagina can suffice to stain her public integrity and the value of anything she says or does or even her right to speak. Can anyone deny that in our culture all it takes to call a woman's integrity and creditability into question is exposing the fact that she has a vagina is not a cis-male?

I've heard it suggested that sexual harassment has become such a hot issue (an issue that I will remind you was forced into premature retirement by the smearing of Anita Hill during the US Senate’s Judiciary Committee hearings for vetting the nomination of Clarence Thomas to the Supreme Court) because young women have been raised to expect to be treated respectfully and so aren't willing to put up with what women have always had to put up with. I don't think it's so simple. I think that the difference for the second decade of the twenty-first century lies in the stunning, important fact that women are increasingly claiming a place in public space and are consequently transforming public discourse in ways that challenge male entitlement to a serious degree. What else is at issue when evaluations of women’s professional work can be (and often are) smeared by social complaints, which seldom have any place in evaluations of men’s professional work? When the new chief of Microsoft publicly tells women attending a women in tech conference that women shouldn’t be so brassy as to ask for raises? When revealing the gender of the authors of scientific and academic papers results in markedly disadvantaging those identified as women? The implication is that women are in public space on sufferance, as special cases, being given privileges that can be revoked for any one of a number of arbitrary reasons, usually amounting to not in some ways being above rubies.

I've been very clear for some time (since starting the WisCon Chronicles, in fact) that WisCon has been developing into an interesting public space concerned, above all, with issues of access (especially, but not, with regard to gender). When I first attended in the mid-1990s, it felt to me like a semi-private space—a little pocket universe one could visit as a refuge from everyday life. Now I see it as a mix of public and private space, where small, brief private spaces thread and intersect the public. It's still, for me, its own unique space, a place of warmth and generosity, but it has become, as well, a vibrant public space where things happen that reverberate and generate and engender and transform, sometimes in ways that entail discomfort. (Change is like that, no?)  In short, I’ve come to see it as a laboratory for change rather than a clubhouse: for me, the very ideal of a feminist space. Above all, it's a place where women are encouraged to claim public space. And that's why the issue of sexual harassment is such a serious one for WisCon. If we (meaning all of us in this culture we live in) are to learn to accept and value women's contributions as easily and fully as we do men's, the double standard, which rests on the assumption that visibility in public space strips a woman of her respectability, has got to go. And that means, of course, that most sexual harassment that occurs in public space must be recognized as an instrument intended to instruct women that they can exist in public space only as sexualized objects, never as speaking subjects.

ETA: After posting this, I read about the latest threat leveled in the Anita-Sarkeesian silencing campaign. Sarkeesian is scheduled to speak at Utah State University. Staff members there received a threat of a massacre if Sarkeesian is allowed to speak. Sarkeesian, the threat writer claims, "poses 'everything wrong with the feminist woman' and that is why she is being targeted. “She is going to die screaming like the craven little whore that she is if you let her come to USU.” It's all about expelling Sarkeesian from public space, and fantasizing her reduction to an inarticulate, whimpering markedly female body. What is wrong with "the feminist woman"? She speaks in public.
Posted by Timmi Duchamp at 5:21 PM 3 comments: