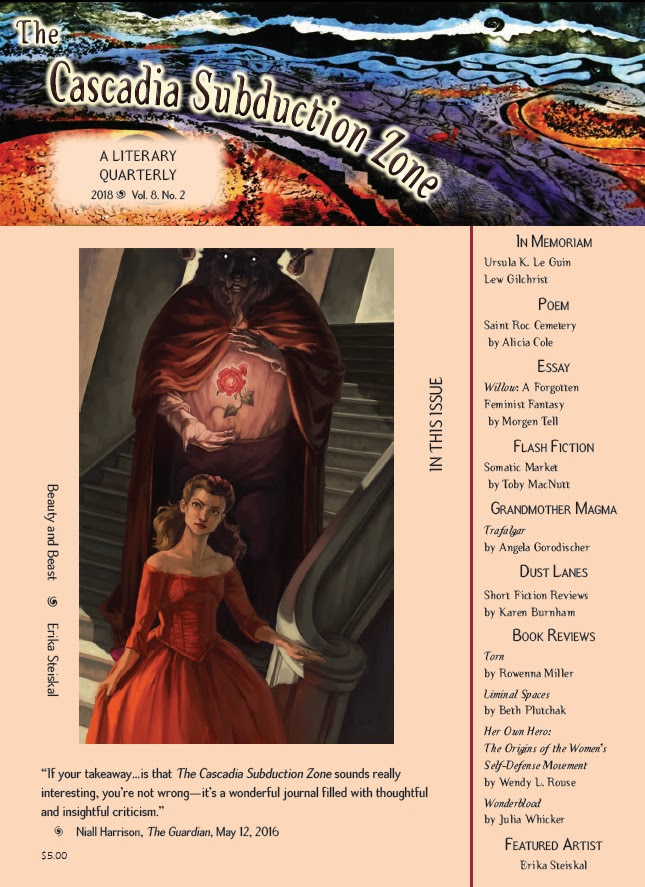 The April 2018 issue of The Cascadia Subduction Zone is out. This issue includes short fiction by Toby MacNutt, a poem by Alicia Cole, an essay by Morgen Tell on a forgotten feminist fantasy film, a Grandmother Magma entry on Angelica Gorodischer by Cristina Jurado, a new column by Karen Burhnam, "Dust Lanes," reviewing short fiction, reviews by Arley Sorg, Nancy Jane Moore, and others, as well an appreciation of Ursula K. Le Guin by Nisi Shawl, and an appreciation of the CSZ's first managing editor, Lew Gilchrist, by Kath Wilham. The issue's featured artist is Erika Steiskal.

Her Own Hero: The Origins of the Women’s Self-Defense Movement, by Wendy L. Rouse
reviewed by Nancy Jane Moore

Posted by Timmi Duchamp at 2:02 PM No comments:

I'm pleased to announce the release of a new edition of Eleanor Arnason's Ring of Swords as a volume in Aqueduct's Heirloom Book series in both print and e-book formats. Long out of print and short-listed for the Tiptree Award, many people, including Ursula K. Le Guin and Jo Walton, have wished for a new edition.

In her introduction to this new edition of Eleanor Arnason's Ring of Swords, Le Guin writes, "Ring of Swords is an intellectually fascinating science-fiction story told in the novel tradition, peopled by ordinary people content with their ordinary life, appalled to find themselves swept up into a social crisis, forced into acts and choices of historical consequence. Its ancestry includes not only The War of the Worlds but also A Tale of Two Cities and War and Peace.

"Having recently brought their own competitive, feud-ridden society into a fragile balance of peace, the Hwarhath have been facing an unexpected problem: the lack of enemies. Given the apparently innate male propensity for finding pretexts to fight, and the fact that their men were all trained as warriors, the women running things at home make sure the men stay out in space protecting the home planet. The drawback is that there seems to be nobody to protect it from. So, when in the vastness of space they finally stumble into another intelligent species, they rejoice. Enemies! At last!"

"The usual assumption," Le Guin notes, "is that if you threaten a war early in a novel, you'd better hurry up and get the bombs bursting in air. And they usually do. Novels that portray war as totally destructive and futile still focus on it--war is what they're about, war is central to them, just as it was central to the old epics that glorified heroes and battles. But a war not fought? What kind of subject is that?" Le Guin asks. Her answer? "It's a beautiful subject for a novel, and Ring of Swords is a beautiful novel."

You can read a sample of Ring of Swords here, and purchase it here.

Posted by Timmi Duchamp at 3:26 PM No comments: