Bouncing about in the chop

The weather, today, is mercurial. It rained all night, and this morning, when the sun was due to rise, the sunrise was invisible and I had to turn the lights on to make coffee and read. Then at around nine, sunlight flooded into the cabin, and when I looked out the window, I saw blue sky overhead. Now, clouds have rolled in, the temperatures dropped a few degrees, and only a few patches of blue are showing. I don't know what to expect next. 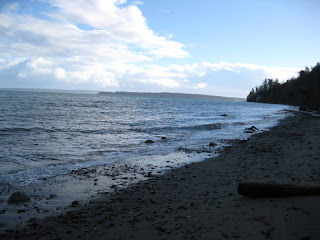 I took my walk today at noon, when the tide was at its (not very low) daytime lowest. The air was mild-- balmy 50(F) degrees, which meant I could sit down on a log every so often and write in my notebook. The water was dazzling but wild. It took me awhile to locate any birds, because they were bouncing around in the chop and waves kept rolling over them. The river otter did not seem to be swimming or even diving, only popping its face up above the chop. I was astonished to see some horned puffins scattered about-- making me wonder if they'd given up swimming in a synchronized line, but it turns out they were different horned puffins than the ones who I always see swimming together in a line, as I discovered when I saw the synchronized horned puffins doing their thing in another part of the inlet. I also saw the usual hooded mergansers and red-breasted mergansers and western grebes, as well as a Brandt's Cormorant (which I've only seen a few times during my visit here).

My hope for seeing a seal this year is waning. (I saw one last year on the penultimate day of my residency.)
Posted by Timmi Duchamp at 2:56 PM