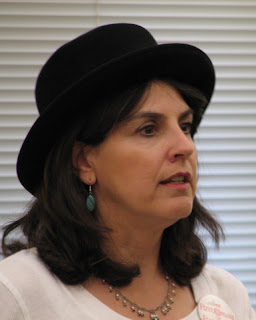 What a year it's been for the movies, eh? I'm not talking about the blockbusters or Academy Award winners. I don't have a clue as to what movies those are. I'm talking about the indies. According to one site I came across a few weeks ago, there are independent movies and then there are independent movies. Technically an indie is any movie not made with Hollywood money. Apparently, however, a good number of indie moviemakers are quite well connected, well funded, well endowed even if they are not using the Hollywood studio system. Their product may technically be independent, but not much different than Hollywood, i.e. vapid fare. My definition of independent is rather less strict. I don't care who makes them or what side of the tracks they come from; I like films that are different. And I get to define "different." Unfortunately, I'm not really up to the task. It's more of a feel thing, like Pulp Fiction was different, Kill Bill was not. Regardless of my inability to define the word, I do prefer the independents.

When I say it's been a good year for movies, I'm talking about my own personal viewing of indie flicks. The highpoint was when I bought an all-access pass to my local film festival, the 2010 Greater Reading Film Fest. I had ten glorious days of two to three new movies a day. I slogged through like a hero and came out bleary-eyed, not knowing what hit me. Yes it was exhilarating, and at times numbing, but I saw some great new films: Backyard, Gasland, Linoleum, Dirty Oil, Snow and Ashes, Chameleon, for starters.

Backyard, which took first prize for the best narrative feature, depicts the horror of Juarez, Mexico where in the past twenty years, hundreds, or possibly thousands depending on who you talk to, of women have been abducted and murdered, motive undetermined. The story is difficult to watch, but Juarez's plight is common, I fear, in border towns where one side is fabulously wealthy and the other is incredibly poor. The poorer community swells with immigrant hopefuls moving in from the hinterlands for a better life but stopped by governmental boundary. With too many people available for easy exploitation, things get unruly, unregulated, and strange. In Juarez's case, deadly, for the segment of population called "woman." Amnesty International blames NAFTA for the situation in Juarez, but Backyard never takes that stance. It remains neutral as far as who is at fault, possibly hoping for sympathy from those that might help if only the blame game is not played. Whatever the reasoning is, the movie tells in blatant terms that something horrible is going on in Juarez. You cannot watch the movie without becoming angry, but with no one to blame it is hard to know where to go with your anger.

Gasland took first prize for best documentary feature. I probably don't need to say too much about this one. It's on the Academy Award shortlist so it's getting visibility. It was a most appropriate film to be chosen for a festival that sits so close to the Marcellus Shale Formation.

My 2010 viewing pleasure culminated in Aparna Sen's 15 Park Avenue, which came to me on a disk that included numerous Bollywood previews. Rolling my eyes as I fast-forwarded through them, I wondered about what the heck I had ordered. I needn't have worried. 15 Park Avenue is no quick, young-and-beautiful-but-supremely-intelligent-and-ultimately-hip shoot 'em up, heavy on the cliche and action. For most of the movie it seemed to be nothing more than a trite exploration of the difficulties a certain caregiver experiences as her sister descends into the kind of fantasy life only a true schizophren is lucky enough to experience. The movie is sad, but not depressingly so. Even with the inclusion of a violent gang-rape (we are mercifully spared footage of the actual violence), we do not pity the sisters. The conversations are slow and extended, the scenes long and mild. Halfway through, you wonder where a story so neatly laid out could possibly go. A character from the past turns up, but even that hardly injects mystery or drama. It's not a jarring plot point. So you're muddling through wondering where it's going to end and if this is one of those movies you sigh over but never rent again, and then suddenly wham! you're at the end and omigod! there is something really big here. Just didn't see it coming. In this day of six Hollywood plots, it's not just nice to be surprised, it's miraculous. Astounding. Rent this movie if you can and stick with it to the end. In fact, keep track of the small conversations throughout. There are clues, there are clues.

Movies, movies, movies. I can't get enough. In fact, I love them so much, I'm delving into the craft myself. My partner (Gary Celima) and I have put together a short narrative movie based on my story "Jump" published by Premonitions in 2008. Making movies is an excellent experience and I recommend it to everyone. Be warned, though, it's a bit like getting a tattoo. Before the scab is healed, you're already planning your next one. If you're curious, visit the funding site for Jump (http://www.kickstarter.com/projects/suelange/jump-project) and let me know what you think.


For the other pleasures, very quickly:

Reading--I absolutely loved Howard's End. I'd never read any Forster before and hadn't really thought I wanted to. People say his work is ponderous, too detailed, old-fashioned, perhaps silly and self-indulgent. Pish posh. The writing is superb, and like Aparna Sen's movie, seemingly slow and forgettable, but not.

Listening--Just ordered Hillbillly Moon Explosion's Bourgeois Baby CD because it's got a killer version of Mambo Italiano on it. The CD is not available yet in the U.S. I'll have to wait until it makes its way to our shores. Too bad. I need a rockabilly fix. Who'd a thunk the Swedish could rock so successfully?

Sue Lange's short stories have been published in Adbusters, Apex Digest of SF and Horror, Challenging Destiny and elsewhere. Her novella, We Robots, was published by Aqueduct Press in 2007. She is a founding member of Book View Cafe (http://www.bookviewcafe.com). Visit her website at http://www.suelangetheauthor.com.

Did you see Winter's Bone?