I'm pleased to announce that the editor of the next volume of the WisCon Chronicles is Jaymee Goh, and she's eager to receive submissions. Here's her call for materials:


Call for Submissions
The WisCon Chronicles, Vol. 11: Trials by Whiteness

WisCon40 followed a seismic shift in the demographics of the convention. Following the success of the POC Safer Space, there is now a Genderqueer/Trans Lounge, and a Disability Lounge. Programming actively seeks a diversity of panelists. How have these changes come about, and what have their ramifications been?

The theme, "Trials by Whiteness," examines how what bell hooks calls the white-supremacist capitalist (cishetero)patriarchy has affected the feminism of WisCon and created difficult confrontations and conversations on the clashing perceptions of attendees. "Whiteness" refers to the position from which white supremacy operates. It has constantly moving goalposts by which everyone is measured. Whiteness does not refer only to white people; non-white peoples can also identify with this position and perspective. "Trials by whiteness," therefore, refers to all the problems people have to go through as a result of white supremacy, on various scales from microaggressions to abuse, whether institutionally or through individual behaviours.

I welcome essays and contemplations on the following:

I encourage personal essays, poems, or roundtable discussions that deal with any of the following, especially in the context of WisCon and within the SFF industry:

·         dialogs and difficult conversations about the rising discomfort of white SFF fans;
·         intra-community conflicts within marginalized groups, which we fear to discuss because we fear whiteness turning these conflicts against us;
·         spillover of hegemonic whiteness onto other forms of oppression, such as disability, class, and gender expression;
·         productive outcomes of difficult conversations, e.g. Nalo Hopkinson's Lemonade Award;
·         what DID happen over the summer before WC39? for good or for ill, how did that affect WisCon40?

Further afield, I am a big fan of Academic Lite articles and welcome experimental and non-academic forms discussing the following topics:

·         how POC and conditionally white people are treated by people comfortably entrenched in whiteness;
·         the internalization of white/Eurocentric standards and difficulties of unlearning them in order to recognize oneself, whether as part of the system, or apart from it;
·         the challenges of being a white person confronting whiteness and demonstrating solidarity and good allyship, earning trust;
·         uncovering whiteness, the ramifications of naming it and dealing with the cognitive dissonance that it demands.

While this anthology does center the POC gaze, I am also interested in white essayists interrogating these difficult subjects from the intersections of their identities as well.

I am particularly interested in articles that are conversations, especially between newer and older attendees, between attendees who identify differently, or in response to WisCon events. For example, attendees of color and white attendees who attended the Hamilton Sing-Along. Pitch me!

Send pitches and submissions to jhameia.goh@gmail.com with "WCC11: [title]" in the subject line. DOC / DOCX / RTF. Submissions open Aug 15, and close Oct 31. All pitched articles should be in by November 15.
Posted by Timmi Duchamp at 2:36 PM No comments: 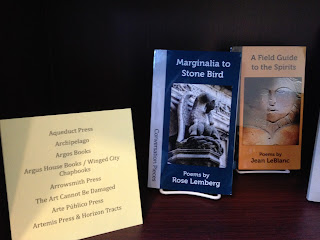 This year two of Aqueduct's recent poetry titles, Jean LeBlanc's A Field Guide to the Spirits and Rose Lemberg's Marginalia to Stone Bird are appearing in Poet House's annual Showcase. Here's the description from the Poets House website:

The only event of its kind, the annual Poets House Showcase is a free exhibit featuring the new poetry books and poetry-related texts published in the United States in a single year from over 700 commercial, university and independent presses. Displaying volumes by individual authors, anthologies, chapbooks, biographies, critical studies, essay collections, CDs, DVDs, and more, the Poets House Showcase is a diverse and inclusive exhibition in which books from micro-presses receive the same care and attention as major publishers.


If you live in NYC and are a poetry lover, this may well be for you. 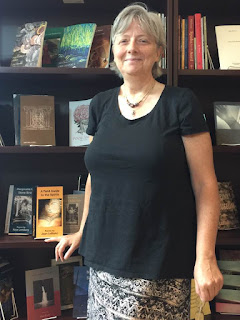 Posted by Timmi Duchamp at 4:18 PM No comments: