The Pleasures of Reading, Viewing, and Listening in 2010, pt.2: Carolyn Ives Gilman

The most interesting books to write about aren’t the ones you admire the most; they are the ones you want to argue with. When Timmi asked me to write about the best books I’d read in 2010, I thought about recommending that everyone read David Mitchell’s The Thousand Autumns of Jacob de Zoet, a book I admired fawningly. But hearing me gush about the way Mitchell’s descriptions replicate the random way we actually perceive the world, and other such connoisseurship, would be tedious. So I want to talk about a book that made me say, hey, wait a minute: Neil Gaiman’s American Gods.

American Gods is not a new book; it’s been sitting on my to-read pile for years. I took it with me to the hospital when I was incarcerated for pneumonia, and it kept my attention through days and nights of IVs and X rays. This is high praise. Not many books could do this. 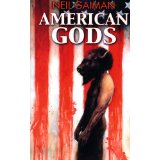 Despite my long delay, I really anticipated reading this book, because I’m quite interested in American gods. To me, this seems like one of the most god-ridden, god-bedeviled countries on earth. Here is a country that could invent Mormonism and Scientology; a country that once was practically papered over with the Utopian communities of Zoarites, Harmonists, Hutterites, and Swedenborgians; a country that has been hospitable to imports like Theosophy and Transcendental Meditation. Surely it has an aptitude for this god thing.

Imagine my surprise, then, to find that American Gods was not about American gods at all; it was about gods from everywhere but America. In fact, Gaiman advances the remarkable argument that America is hostile to gods, that they can’t survive on American soil. The premise of the book is that immigrants from all over the world brought gods with them to North America, but they have not thriven here, and now are forced to eke out an existence as grifters and deadbeats, taxi drivers and small-town businessmen. It makes for a pretty interesting story, although it requires you to swallow the idea that practicing believers in Odin and Anubis somehow made it through Ellis Island.

The idea of America being hostile to gods seemed preposterous to me until it struck me that if all you knew about America came from its writers of fantastic literature, you would surely have to draw the same conclusion. American fantasy is remarkably Eurocentric, and where it is not, it turns to Japan or Africa or India for mythology, almost never to America. If you believe our fantasists, American cities are populated with imported Romanian vampires, Russian werewolves, Celtic faeries, and Germanic witches, but nary a homegrown magical being. True, there are some fantasies based on a European environmentalist notion of what Native Americans might have believed, scrubbed clean of all the actual gods and mythology. But as a rule, we plagiarize northern Europe when it comes to the supernatural.


Why is it so easy for us to imagine an Old World teeming with supernatural beings, and so difficult to imagine a North America enchanted with indigenous gods? Why can’t we believe we live in a naturally magical place? I can’t answer that, but I have some ideas.

Gods tend to spring from the land. When you go back to the original myths, the events are usually tied to a geographic spot—not just “the forest,” but a specific glade in a particular forest. People with an intimate knowledge of their local landscape know the spots where other-than-normal events tend to happen, where the boundaries between here and there are thin, and oddness leaks through. North America is just as peppered with these places as anywhere else on earth. What it lacks are people with the intimate, generations-long knowledge of place that reveals the location of enchanted spots. We are too mobile for such sensitivity. It takes quiet, slowness, and listening, for which we are in too much of a hurry. But this may be changing. We could, of course, make it change.

Gods also tend to spring from the past, and we persist in seeing North America as a place without a past. It is somehow necessary to the American character to believe that history started here with the arrival of Europeans, and as a result we are in a state of willful denial about deep time on this continent. For example, in St. Louis I live in a place that was the site of a city bigger than London or Paris in 1200 A.D. Half an hour’s drive from my home there is a flat-topped pyramid larger in volume than the great pyramid of Cheops. From the crest of this towering, geometric structure you can see a panoramic view of the valley that was once the urban center of North America. A recent archaeological theory holds that the valley was laid out much like the Nile Valley at Thebes. On the east side was a complex of temples dedicated to gods of the sun and sky; on the west side was a cluster of pyramids that marked the entry into the underworld—a maze of limestone caverns that now lie under a rusty wasteland of abandoned railroads and factories. The city on the east side is a UNESCO World Heritage Site, but Americans trivialize it by calling the pyramids “Indian mounds” as if they were primitive heaps of dirt.

Another example: when the Roman empire was in its heyday in Europe, the Scioto Valley in Ohio was one of the holiest places on earth. Here, inhabitants created hundreds of enigmatic landscape artworks of massive berms and ditches in geometric shapes—perfect circles, octagons, precisely measured squares, ellipses, and linear causeways that linked sites 50 or 100 miles apart. Archaeologists now think that these people had a grasp of geometric theory we never suspected—for example, some of the square-circle combinations (which look like Euclidian diagrams in aerial view) may be linked to the classic problem of “squaring the circle” that also fascinated Greek mathematicians. Others are astronomically aligned—not to the sun, which would have been obvious, but to the moon cycles, which requires precise observations over at least an 18-year period. And yet Americans think they have to go to Europe to tour neolithic observatories.

I mentioned how modern books trivialize Native American religion by denying that it involved mythology or gods. Gaiman explicitly states this in American Gods, but can hardly be blamed for it, since to find information on Indian gods one must resort to such sources as the forbidding green volumes of the Bureau of American Ethnology (which, contrary to popular belief, are mostly written by Indians themselves, too often uncredited). Here one finds grand mythic cycles such as the one underlying the Mandan Okipa ceremony, which re-enacted the creation and early history of the world. The Mandan knew gods aplenty—Charred Body, Old Woman Who Never Dies, Long Arm, and demons like Shoulder Mouth, Tail with a Knife, and Flame around the Ankle. Among the most compelling gods are the cosmic twins Mahash and Atutish. They represent principles of wild chaos and civilized order. Through a set of linked stories they collaborate to rid the world of primordial dangers. The climax comes when Mahash is crucified for three days on a forked tree, then is resurrected by the daring intercession of his brother, demonstrating the necessity of both principles.

With material like this at hand, why do American writers feel they have to import supernatural beings and ancient civilizations from Europe?

Of course, the granddaddy of American gods is the Christian one, who has absorbed entire pantheons. I was puzzled by Gaiman’s exclusion of Christianity, as if it had nothing to do with the question of American gods. (Actually, till the end of the book I kept expecting Jehovah to show up and smack down all of Gaiman’s has-been pagan gods with his pinky. It never happened.) Now, I can understand writers’ hesitation to take on living gods who walk around today interceding in peoples’ lives and messing with our politics. But you cannot argue that the Christian god lacks enchantment. And authors do not earn points by only taking on the easy questions.

I wish I could challenge American authors of fantastic literature to do some hard work seeking inspiration in the American landscape and the American past, instead of looking in the pages of already-written books and already-used myths. This is a magical and mysterious country full of pristine material. For gods’ sake, we should use it.

Carolyn Ives Gilman lives a double life. In her writing life, she has published dozens of stories and the very fine novel  Halfway Human. In her professional life, she is a historian specializing in 18th and early 19th-century North American history, particularly frontier and Native history. Her most recent nonfiction book, Lewis and Clark: Across the Divide, was published in 2003 by Smithsonian Books. She has been a guest lecturer at the Library of Congress, Harvard University, and Monticello, and has been interviewed on All Things Considered (NPR), Talk of the Nation (NPR), History Detectives (PBS), and the History Channel. As for her "day job," Carolyn works for the Missouri Historical Society as a historian and museum curator.

Posted by Timmi Duchamp at 9:31 PM

With all due respect -- because I do agree with some of the points you're making, here -- it bothers me when you refer to living peoples like the Mandan using the past tense.

Seconded: a remarkable essay. I think Gaiman's shown himself elsewhere to be a little dismissive of American Indian history. And question of where the God of Abraham shows up in his work is fascinating.