The Pleasures of Reading, Viewing, and Listening in 2010, pt. 23: Paige Clifton-Steele

Pleasures of 2010
by Paige Clifton-Steele 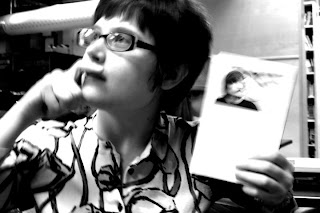 It's been a phenomenally good reading year. I dropped out of college and moved to Seattle where I began to read at a pace unmatched since the last time I dropped out of college. My dear friend, Abbey Mei Otis, was at Clarion West this summer and I read as many of her stories as she would let me, some of which are now available on Strange Horizons and Tor.com (http://www.tor.com/stories/2010/12/sweetheart). She writes lucent, ferociously ethical science fiction that’s been breaking my heart since I first read it in 12th grade. 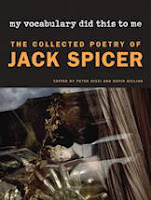 Another friend, a poet met in a Seattle library over a volume of My Vocabulary Did This to Me: The Collected Works of Jack Spicer, soon had me reading Jean Genet (Our Lady of the Flowers), Urs Allemann (Babyfucker), Maggie Nelson (Bluets), and Roberto Bolano (Antwerp)—some of the best books I’ve read this year. His own poetry is decadent, funny, disobedient, queer, cool, salacious. Some of it’s published, some isn’t. Read him if you find him--that's Leon Baham.
I adored Mad in Pursuit, Violette Leduc’s memoir of Paris at a certain time—the Paris of Colette and Simone de Bouvoir and Jean Genet and Cocteau. Though actually, it’s the Paris of Violette Leduc’s fevered interior, composed of pain and huge needs. Is she more in pain than most people, or are most memoirs shamming?

Somewhere I remember seeing Eileen Myles talk about the influence of Violette Leduc: Inferno (a poet’s novel), by Eileen Myles, an astonishingly good book, owes Leduc something in its rhythms and the kind of permission it gives itself to drift, to arrange memory in response to the way memory arranges itself.
More memoir! I liked Michael de Larrabeiti’s French Leave: A Love Affair with France. De Larrabeiti is a Brit in love with the land across the channel, who at one point followed a group of Provencal shepherds on the transhumance—the long journey on foot across the alps to sell the sheep, and collecting a (separately published) volume of Provencal stories.

I loved Helen Merrick’s The Secret Feminist Cabal: A History of Science Fiction Feminisms and I owe to Merrick the discovery of Christine Brooke-Rose (Out)  and Pamela Zoline (The Heat Death of the Universe and Other Stories). I read a lot of feminist SF in this year, out of Aqueduct, Nightshade, PM Press, Ballantine: I enjoyed, Eleanor Arnason’s Mammoths of the Plain, Suzy Charnas’ Dorothea Dreams, Gwyneth Jones’ Bold as Love and The Universe of Things, and Nicola Griffith’s Slow River.
I read two scientific cautionary tales: Anatomy of a Controvery: The Trashing of Margaret Mead, by Paul Shankman and Rebecca Skloot’s The Immortal Life of Henrietta Lacks—and though one is an academic press and the other is a popular bestseller, both are stories deserving of a wide readership. Letters, Summer 1926: Maria Tsvetaeva, Boris Pasternak, and Rainer Maria Rilke was so intense and so personal that it sometimes felt prurient. (This was also the year I finally liked Rilke—another gift from my poet friend.) I’m about halfway through The Stones of Aran: Labyrinths, by Tim Robinson, a huge Proustian piece of literature-of-place.
Leslie Scalapino died this year, which got me reading New Time. Leslie Scalapino’s project is, at least partially, to make a writing that is of the body; something that is as much, as visibly a bodily output as motion. She likes words that are both spatial states and states of being: depression. She writes poems that read like the scaffolding of the brain, so evocatively suggestive of what they encapsulate that it seems you could know the most simple structure of being simply by looking through them.
I was utterly seduced by Lisa Robertson’s glossolalic Magenta Soul Whip, which concerns itself with consciousness, language, and food. The only poetry I liked better than hers was Rae Armantrout: a LANGUAGE-associated poet who has received a lot of “mainstream” poetic attention lately, especially since her 2010 Pulitzer win. And it’s sad that it took that to get me reading her—her work pays to the strange intersections of cognitive processes, commercial language, and verbal tics. Her most recent collection Versed is written while Armantrout is living with (I won’t say battling) cancer, and while the book has been talked about as influenced by her disease, I’m not convinced she’s doing anything significantly different than she was doing before her cancer (The Pretext), and before the widespread attention. But I do think that cancer is a subject that accrues to itself a lot of sentimental, self-help inflected language—and Armantrout’s scientific precision, her obsessive and restless observations, her indifference to the dross of much contemporary lyric—makes her a better writer on the subject than most.
I liked Ben Lerner’s latest, celebrated Angle of Yaw. I liked the otherworldly penny-dreadful poetry of Vera and Linus, by Jesse Ball and Thordis Bjornsdottir. I liked the serious, high lyricism of Leonard Schwartz’s Ear and Ethos. I liked the fucked up queerness of The Dream Police, by Dennis Cooper. I liked the lyric-of-discomfort of Rob Halpern’s Disaster Suites. I liked the found language of Rachel Zolf in the personal epic Masque and in Human Resources. I liked CA Conrad’s sadfaced grossout grandiloquent burlesquing The Book of Frank, and I also liked Brenda Iijima’s loopy, liminal If Not Metaphoric, Carolyn Knox’ tightly controlled, beautifully wrought Nine Worthies, and the book Darren Waterston  that collects that painter’s work with the poems of Amy Gerstler.
I loved Nox, by Anne Carson. Nox is Carson’s elegy for the brother she barely knew. A translator of the classics, she approaches the loss as she has approached translating ancient, fragmented documents. Where is she to locate meaning? How to fill in the gaps? How to live with the unbreachable silence that separates her from the source?
In fiction, I read and enjoyed And Chaos Died by Joanna Russ, A Room with a View by E.M. Forster, Middlemarch by George Eliot, I, Claudius by Robert Graves, Redemption in Indigo by Karen Lord, and Lady into Fox by David Garnett.

Concrete Island--my first J.G. Ballard!--gave me a taste for more. I liked Eileen Myles’ earlier memoir/novel, Cool for You.. I was faintly disappointed in Kij Johnson’s The Fox Woman, Jack Vance’s The Blue World, Martin Duberman’s Emma Goldman: An Epic Drama, Amy Gerstler’s Crown of Weeds, and Buchi Emeta’s Kehinde (these are all authors I otherwise adore.)
I loved Virginia Woolf’s The Waves so much I can hardly talk about it.

I liked Kathy Acker’s Bodies of Work, the only essay collection I read this year. I dipped into the short stories of 2009 Nobel winner Herta Muller—I didn’t read much, but enough to be surprised at how much I liked them. I also kept returning to the short fiction of Carol Emshwiller, whose heady, bizarre fabulations seem like they must have fit uneasily with short fiction when she started writing. I’m not sure they fare any better now. Early in the year I read Chimamanda Adichie’s much-hyped novel about the Biafran War, Half of a Yellow Sun. It’s much like her short stories: thoughtful, accomplished works that, to my mind, seem to lack something—some intensity, some willingness to mold the form around the content. This deficiency is more striking in the novel than in the short stories, I feel, there is nothing productive about the friction between the immaculately structured book and the cataclysm it tries to contain.

I was lucky enough to see several performances, with two different casts, of Kenneth Gaburo's experimental composition for seven "virtuoso speakers"...a piece I describe differently every time to try to tell people what it is. Which is, perhaps, the point: as it certainly dramatizes...the unstable relation between text, meaning, and sound.

Though I saw almost no theater this year, the Erickson Theater’s production of Breaking the Code, Hugh Whitemore’s 1986 play about the career of Alan Turing, was flawlessly done. Turing was, of course, the cryptanalyst who helped to break the Enigma code and create computer science, and who was persecuted by the British government for homosexuality. Sad, earnest, and deft in its politics, the play also avoids pillaging its own science for ham-handed metaphors and themes.
A couple of summers ago I was briefly obsessed by The Path, a game out of independent video game studio Tale of Tales, based on Little Red Riding Hood with music by Jarboe (!), which explored female adolescent vulnerability in a world that becomes, ultimately, the psychospiritual landscape of nine different girls. I’m in the middle of their newest offering—Fatale--based on Oscar Wilde’s Salome. Fatale resembles traditional game play even less than The Path did—it’s poetic, I find, in its insistence on the entertainment value of contemplation, redoubling interpreting, lingering, rummaging. The best movie I saw this year Du Levande. You, the Living, by Swedish dirrector Roy Andersson. An existential comedy that, strangely enough, also fits the description “living tableau”.
I read Matthew Cheney’s blog, themumpsimus.com, and Strange Horizons when I could.
FINAL ACCOUNT:
Number of books thrown across the room in disgust: 2
Number of books read while drunk: ???
Number of colleges dropped out of: 1
Number of Marxist reading groups dropped out of: 1
Number of books my grandma sent me: 2
Fees at the Seattle Public Library System: $21.55
Paige Clifton-Steele is a poet who lives in Seattle, works in the mental health industry, and runs a feminist science fiction book club. She is also the editor of the Aqueduct Gazette.

Posted by Timmi Duchamp at 4:11 PM