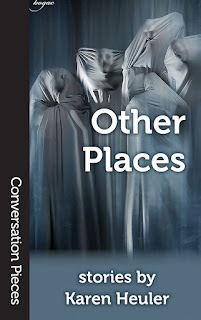 I'm pleased to announce the release of Other Places by Karen Heuler, a collection of short fiction, as the fifty-first volume in Aqueduct Press's Conversation Pieces series. In Other Places' tales, life unfolds in strange ways. You may encounter people from your past living in your former apartments, or realize you have a penis as you engage in war-dreams, or find a planet filled with ghosts that look exactly like the ghosts back home. Is it possible they are the same as the ghosts back home? Wherever you travel, you'll have to make tough decisions about the aliens you may have harmed and the aliens who may harm you. Other Places, Karen Heuler's latest story collection, follows travelers as the familiar becomes strange, and the strange becomes life.

Publishers Weekly has reviewed Other Places: "Prolific fantasy and horror writer Heuler continues defying convention and categorization in her latest collection of stories. The first tale, “The Rising Up,” wherein a young woman unexpectedly realizes she has a penis while engaging in dream combat, sets the stage for the weirdness to come. There is fairy tale opulence in “Twelve Sisters, Twelve Sisters, Ten,” in which a dozen sisters spend their evenings dancing in an underwater house. “The Apartments,” in which a woman visits her old haunts and discovers some unsettling personal information, is as much a stroll down memory lane as it is a meditation on narrative. Each story is as inventive as the last. Heuler’s prose illuminates the strangeness of both her characters and her settings. Establishing elaborate themes and morals is no easy feat in such short narrative arcs, but Heuler does it admirably, quickly laying the groundwork for her myriad of worlds, cultures, and travelers. There is no doubt as to Heuler’s creativity, but some of the stories have less pull than others, though the collection as a whole does not feel unbalanced. Exploring difficult questions with imaginative prose, Heuler leaves readers with much food for thought."

Other Places is available in both print and e-boook editions. You can purchase it now through Aqueduct's website.
Posted by Timmi Duchamp at 2:11 PM No comments: 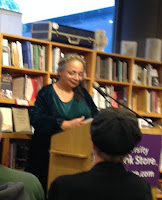 Yesterday, Tor released Nisi Shawl's debut novel, Everfair, and last night at University Bookstore in Seattle, a crowd of sixty hung on Nisi's every word spoken and note sung. No one who's been to a recent reading by Nisi will be surprised to hear that she opened her reading with a song important to the characters in her just-released Everfair; but not only did she sing a capella, she also directed the audience to join in the chorus (which we all did). Flashing us a mischievous smile, she promised to read us a sex scene--which she did--but I had to laugh when someone later, standing in the long queue of people waiting to get their copy of the book signed, grumbled with amusement that it was actually a scene of sex interrupted. At any rate, I came away with my own copy in a mood of exultation.

Nisi commented to another writer before the reading that it had taken her sixty years to achieve this book. This resonated powerfully with me when University Bookstore host Duane Wilkins reminded us of Nisi's long view by beginning his introduction with an anecdote of how Nisi had many years back asked him if she could read her first novel at the bookstore and that when he'd said sure and asked her when it was due to be released she replied that she hadn't yet written it. Obviously, she was thinking ahead.

Nisi's going to be reading in a variety of locations across the US this fall. Tor.com has posted her schedule for September (and presumably will be updating that with more appearances that I know she has planned). I know this blog's regular readers will want to read Everfair. I haven't yet read it myself, but the blurb on the front cover, by Karen Joy Fowler, reads: "A book with gorgeous sweep, spanning years and continents, loves and hates, histories and fantasies...Everfair is sometimes sad, often luminous, and always original. A wonderful achievement." Enough said. 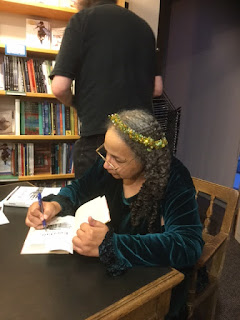 Posted by Timmi Duchamp at 5:48 PM No comments: