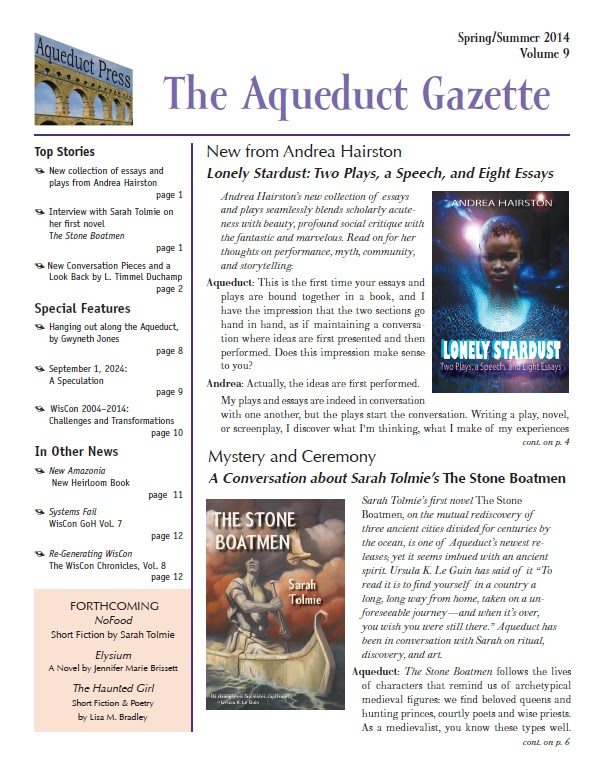 Aqueduct Press has published a new issue of the Aqueduct Gazette, edited by Arrate Hidalgo, to celebrate our tenth anniversary. We distributed print copies of the issue at WisCon, and will be bringing some to Readercon and Diversicon. But you can download a pdf of it (free) here. The table of contents includes:

A conversation with Sarah Tolmie, discussing her debut novel, The Stone Boatmen;

An original essay by Gwyneth Jones, "I Don't Fly";

An excerpt from Alexis Lothians' introduction to New Amazonia: A Foretaste of the Future by Elizabeth Burgoyne Corbett;

And a reflection by me on the Conversation Pieces series.
Posted by Timmi Duchamp at 4:25 PM No comments:

I'm pleased to announce the release of another book launched at WisCon, Systems Fail, by Hiroi Goto and N.K. Jemisin. This is a numbered, limited edition celebrating the work of WisCon 38's Guest of Honor, in Aqueduct's WisCon GoH series. The volume includes two pieces of Goto’s short fiction, N.K. Jemisin’s Nebula Award-nominated story “Non-Zero Probabilities,” and a selection of Jemisin’s essays as well as her 2013 Continuum IX Guest of Honor speech. In addition, the authors talk at length with interviewers knowledgeable about their work: Goto with writer and editor Nisi Shawl, and Jemisin with critic and scholar Karen Burnham.

Here's the Table of Contents:

It's available now at Aqueduct, and will be available elsewhere soon.
Posted by Timmi Duchamp at 9:18 PM No comments:

I'm happy to announce Aqueduct's release of The WisCon Chronicles, 8: Re-Generating WisCon, which Aqueduct launched last month at WisCon. This volume is edited by Rebecca J. Holden, who notes that WisCon is filled with strong opinions and loud voices, and that central to any discussion about definitions of feminisms are questions about outsiders and insiders: Who is WisCon? Who is feminist? Whose opinion matters? Whose voice is heard? Who counts? Who belongs to which generation and does that matter? What does WisCon mean now? What will it mean for future generations?

Re-Generating WisCon is available now through Aqueduct in both print and e-book editions, and will be available elsewhere soon.
Posted by Timmi Duchamp at 12:43 PM No comments:

So that was WisCon!

One thing I have learned is that reading about other people’s first time at WisCon has little to do with living it in your own flesh. (And that writing about it is much harder than I had anticipated.) WisCon has been exciting, hectic, challenging at times—and lots of fun.

Living in Europe and being the only feminist sf/f fan I knew, my prospects of ever making it to Madison for the convention were on the limited side. Two years later, my first incursion into the WisCon community has in fact been rather spectacular: being a trainee at Aqueduct is a tremendous privilege, in that it has made it easier for me to meet so many interesting, talented people that I would have been shy to approach otherwise. Not to mention the excitement of linking friendly faces to names whose work I admire and chatting with them as if it were the most natural thing in the world. Which it is.

A lot of WisCon, I felt, is about sharing a passion for radical ideas in a space that is constantly challenging itself, and about creating situations in which everybody gets to participate in that sharing, discussing, and transforming. Many of the panels I attended (on radical queer politics, on decolonizing science fiction, on Afrofuturism) made clear that we have no final answers; that the conversation is always growing in size, in complexity, in perspectives; and that we will always need at least one more WisCon to figure out what science fiction can do to face and fight oppressive structures in all their current manifestations.

There were at least two panels in which survival was discussed as a form of successful resistance. And, prevalent as this notion is, I was really interested to hear Sheree Renée Thomas, in the context of Afrofuturism, point out her aiming beyond survival—an attitude that I’m excited to encounter in current and future Afrofuturist works. The panel, chaired by Jennifer Marie Brissett (her new novel Elysium is forthcoming from Aqueduct), succeeded in introducing some of the basics to those members of the audience who might have needed it, without losing focus on the challenges and new directions that Afrofuturism may take. What is clear is its power as a theoretical lens, as Thomas put it, through which to look at the black experience, which is, she pointed out, far from monolithic.

Hiromi Goto’s and N.K. Jemisin’s Guest of Honor speeches, powerful and extremely relevant to the current situation in sf/f publishing and fandom, had a lot to say in this respect. They confirmed once and for all why I want to keep doing what I’m doing. Both authors’ readings at A Room of One’s Own also turned me, inevitably, into a fan.

Not all was political debate, however: there were other things apart from radical change to celebrate. Aqueduct’s 10-year anniversary party was a blast. Raffle tickets were drawn, prizes were won, cake was eaten, wine was drunk, and the party wrapped up nicely around the time several Aqueductians hoped to retire, satisfied, to their rooms, while some of us continued our journey down the conveniently plastic-covered party corridor.

WisCon has room for plenty of different things, including ukuleles, dozing, tapas(!), tiny party hats, and compulsive book buying. It also has all the room in the world for making friends. Many people happily assume that we are all coming back next year and, whether they last a couple of minutes, hours, or days, the conversations started will probably continue then—which is just as well, because I wouldn’t miss WisCon 39 for the world.
Posted by Arrate at 1:02 PM No comments: