A space opera set in Gwyneth Jones's Aleutian universe, Spirit re-visions Dumas's The Count of Monte Cristo and further explores the workings and consequences of the series' Buonarotti Transit. Bibi, the sole survivor of her tribe, serves Lady Nef, the wife of General Yu, whose forces exterminated Bibi's tribe. Constantly embroiled in court intrigues and conspiracies, Nef and Yu are sent on a dicey diplomatic mission to Sigurt's World, which culminates in murder and betrayal, resulting in Nef's and Bibi's imprisonment in the ultimate oubliette, from which escape is virtually impossible. As Karen Joy Fowler noted in her review for the Guardian, "Escape is costly; revenge complex." This is, indeed, Dumas for the 21st Century.


--Rebecca Ore's The Illegal Rebirth of Billy the Kid

In 2067, human cloning is a part of everyday life. But it is a bizarre form of cloning: not actually the direct copying of a humans, but rather the construction of custom-made reproductions of humans using animal DNA. The CIA uses these so-called "chimeras" for various undercover operations, and one of their technicians, Simon Boyle, has a sideline making illegal copies: chimeras based on famous criminals, for rent. His Billy the Kid, a creation unable to comprehend or sometimes even recognize the sorts of things that didn't exist before the 1880s and endowed with powerful sex pheromones, is quite popular for a night of historically convincing passion with rich women, particularly the part where Boyle (as sheriff Pat Garrett) guns him down. As the story progresses, Billy the Kid starts remembering things from his previous lives. One of Boyle’s clients sets Billy loose into the mean streets of the 21st century, where he struggles to seize control of the myths in his ROM. Jane, a worker in a shelter for abused chimeras, has her life turned upside down as she's caught up in a struggle for possession of Billy. Sex pheromones or not, not only is Billy's identity as a real person at question, but the notion of masculinity as well.

Spanning thirty years, this volume collects six stories, one poem, and a WisCon Guest of Honor speech. In the richly ironic "Warlords of Saturn's Moons," first published in 1974, a cigar-puffing woman writes space-opera while the drama of real-life inner-city Detroit goes on around her; "The Grammarian's Five Daughters" offers a playful explication of the uses of the parts of speech; "A Ceremony of Discontent" takes a humorous approach to a modern-day feminist problem; and Arnason's wise, earthy tales of hwarhath serve up new myths explaining the origins of the world and morality (among other things). The work in this collection entertains with its wit, delights with its precision and imagination, and challenges and provokes with its bluntness. Ordinary People offers a small, potent taste of the oeuvre of an important feminist sf author.

Like all of Aqueduct's e-books, these can be purchased, DRM-free, through our site in both mobi and epub formats, as well as from Weightless Books, Wizard's Tower, and Amazon.com.

Posted by Timmi Duchamp at 4:49 PM No comments:

Here in the US, we're used to politicians defying logic and pushing policies premised on an outrageous degree of scientific illiteracy, despite the US public's faith that we are the most scientifically "advanced" nation. After all, the US government has the ability to kill at a distance of thousands of miles effortlessly and to read the email and listen to the conversations of anyone, at will. And its citizens have nifty gadgets like smart phones that make them feel like they're "living in the future." (We leave it to less "developed" country to have the fastest, widest internet access and decent healthcare and housing for our citizens-- but then there's nothing about accessible healthcare in the capitalist vision of what the future should be.)

But it seems that in the scientific illiteracy sweepstakes, the politicians of other "developed" nations are giving US politicians a run for their money. A prosecutor and judge in L'Aquila (Italy) present the latest frightening (almost unbelievable) example. Perhaps you remember the earthquake in L'Aquila in 2009, which resulted in more than 300 deaths? Well get this: a jury in L'Aquila, presented with charges against seven of Italy's leading seismologists, moved to convict them of manslaughter for failure to predict the earthquake. Which is to say: one set of politicians-- a prosecutor and all the many tentacles of the apparatus that prosecutors possess, which, as in the United States, is a highly political office, many of whose decisions are highly politically determined, saw fit to dream up such charges in the first place, and a judge, who in both Italy and the US are often politically connected, chose to allow the charges to be brought in the first place and at no time saw no reason to dismiss the case as absurd and inappropriate.

Can you guess what the sentence was?


The defendants, all prominent scientists or geological and disaster experts, were sentenced to six years in prison.

Earthquake experts worldwide decried the trial as ridiculous, contending there was no way of knowing that a flurry of tremors would lead to a deadly quake. "It's a sad day for science," said seismologist Susan Hough, of the U.S. Geological Survey in Pasadena, Calif. "It's unsettling." That fellow seismic experts in Italy were singled out in the case "hits you in the gut," she said.

In Italy, convictions aren't definitive until after at least one appeal, so it was unlikely any of the defendants would face jail immediately.

The $64 question is whether the conviction will be tossed out by an appeal. Presumably, that will depend on the the political context-- not scientific competence. But I'm sorry to say, even if the scientists' conviction is overturned, we will no doubt hear a loud public chorus of indignation, since the prosecutors and judge have done their damnedest to implant the idea in people's minds that scientists can predict major earthquakes and that the guilty have once again gone free.

Prosecutors reportedly argued "that the L'Aquila disaster was tantamount to "monumental negligence," and cited the devastation wrought in 2005 when levees failed to protect New Orleans during Hurricane Katrina." I've heard from university level math faculty that since they no longer teach plane geometry in high schools these days, many students in their class don't understand basic logic. Could that be the problem in L'Aquila, too, do you think? Apparently the decision to convict is pretty popular in some quarters:


Relatives of some who perished in the 2009 quake said justice had been done. Ilaria Carosi, sister of one of the victims, told Italian state TV that public officials must be held responsible "for taking their job lightly."

The world's largest multidisciplinary science society, the American Association for the Advancement of Science, condemned the charges, verdict and sentencing as a complete misunderstanding about the science behind earthquake probabilities. There are swarms of seismic activity regularly in Italy and most do not end up causing dangerous earthquakes, said geologist Brooks Hanson, deputy editor of the organization's Science magazine. He said that if seismologists had to warn of a quake with every series of tremors, there would be too many false alarms and panic. "With earthquakes we just don't know," Hanson said Monday. "We just don't know how a swarm will proceed."

Quake scientist Maria Beatrice Magnani, who followed the trial closely and knows the defendants professionally, called the outcome "pretty shocking." She disagreed with putting scientists on trial, and contended that the death toll would have been lower had buildings in the quake-prone area been better reinforced.

The verdict left Magnani and others in the field wondering about the way they articulate their work. "We need to be extremely careful about what we say, and the information we provide has to be precise. We cannot allow ourselves to slip," said Magnani, an associate research professor at the University of Memphis.

It's interesting (if predictable) to note what escaped consideration in the court case:


Many scientists and commentators have noted that the court case failed to address a major cause of fatalities in disasters like quakes and mudslides: erecting homes, schools, hospitals and other public buildings on quake-prone terrain without the proper construction techniques or materials to make the structures more resilient.

After the April 2009 quake, which left 308 people dead, many experts said that the 6.3-magnitude temblor wouldn't have caused such extensive damage if buildings been constructed or retrofitted to meet modern quake zone construction standards.

Naturally, the prosecutors deliberately excluded anything that would allow the jury to understand the damage with a reasonable degree of complexity. In effect, the politicians needed a scapegoat to appease the people who suffered such devastating losses. Rather than examining the real culprits-- the developers and construction contractors and the politicians who failed to enforce reasonable standards-- they went after scientists for failing to predict what could not be predicted, thus exploiting widespread scientific ignorance. There is nothing about this that is not political.
Posted by Timmi Duchamp at 4:13 PM 1 comment: 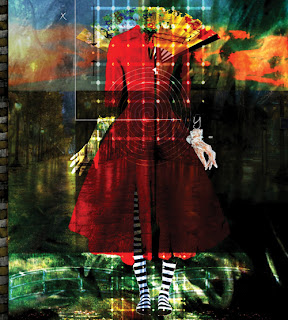 The Fall 2012 issue of The Cascadia Subduction Zone is out! This issue features two fascinating essays by writers who also work in other arts, Kiini Ibura Salaam and Mark Rich. Sonya Taafe and Catherine McGuire contribute poems, Suzy McKee Charnas, for our Grandmother Magma column, writes about Ursula K. Le Guin's The Left Hand of Darkness, while Nic Clarke, David Findlay, Deb Taber, Karen Burnham, and Victoria Elisabeth Garcia review work by Christopher Barzak, Annemarie Monahan, and others. And finally, this issue's artist is Kristine Campbell, whose "Why Ask Y?" graces our cover.

Essays
Painting and Writing: My Yin and Yang
by Kiini Ibura Salaam


Line Improvisation: Notes by the Fly in the Web
by Mark Rich

Posted by Timmi Duchamp at 2:54 PM No comments: