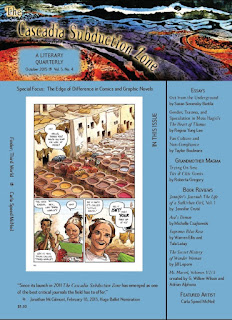 The Fall issue of The Cascadia Subduction Zone (Vol. 5, 4) is out. It's thicker than usual, and focuses exclusively on comics, and was edited by Thomas Foster. It features essays by Susan Simensky Bietila, Regina Yung Lee, Taylor Boulware, and Roberta Gregory, and Carla Speed McNeill, the featured artist, as well as five reviews. You can purchase single copies and subscriptions here.

Essays
Out from the Underground
by Susan Simensky Bietila

Gender, Trauma, and Speculation
in Moto Hagio’s The Heart of Thomas
by Regina Yung Lee

The Secret History of Wonder Woman, by Jill Lepore
reviewed by Karen Burnham

Featured Artist
Carla Speed McNeil
Posted by Timmi Duchamp at 9:21 AM No comments:

As I write this, the Strange Horizons fund drive ends in 2 days and 12 hours: if you're intending to contribute and haven't yet done so, you still have time to do it. They're within $1000 of meeting their goal. Many of Aqueduct's authors (including me) are or have been contributors to Strange Horizons. They live in our corner of the galaxy.

In case you don't already know:

Every donation, from $1 to $1,000, is hugely appreciated. As a thank you, we have our regular prize draw, and fund drive special issue. For the first time, you can also sign up (via Patreon) to receive SH in ebook form—and to mark our fifteenth anniversary, we've also put together an anniversary ebook, containing some of our favourite stories.

How do you get these things?

Everyone who donates, via any route, is entered into the prize draw, featuring an array of books, artwork, and other goodies. Check out the prizes page throughout the fund drive, as we add more.

Everyone who donates at least $10 by any route (including Patreon, at any level) will also receive an eBook copy of Strange Horizons: The First Fifteen Years at the end of the fund drive. This ebook includes stories by Elizabeth Bear, Ken Liu, Carmen Maria Machado, Vandana Singh, and many others, plus a history of the magazine.

I'll just note here that several Aqueduct Press books are among the booty available through the prize draw.
Posted by Timmi Duchamp at 11:39 AM No comments:

Quote of the day

"Man" is a universal that applies to everyone precisely because it is no one. It disincarnates itself from the living singularity of each one, while claiming to substantiate it. It is at once masculine and neuter, a hybrid creature generated by thought, a fantastic universal produced by the mind. It is invisible and intangible, while nevertheless declaring itself to be the only thing "sayable" in true discourse. It lives on its noetic status, even though it never leaves behind any life-story, and impedes language with the many philosophic progeny of its abstract conception.              --Adriana Cavarero, Relating Narratives: Storytelling and Selfhood
Posted by Timmi Duchamp at 3:22 PM No comments:

If you haven't purchased the Philip K. Dick Award e-book bundle (see this post) and would like to, the sale ends Thursday at midnight EST. It's a great deal, and includes novels by Gwyneth Jones, Pat Murphy, Elizabeth Hand, Kathe Koja, and others. Just go here.
Posted by Timmi Duchamp at 12:19 PM No comments: 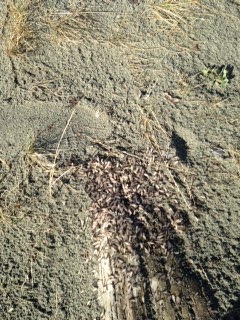 Have you ever seen termites in action? I hadn't, until I encountered them this morning, devouring a piece of driftwood well above the high-water line of a Port Townsend beach. Though they were a dull color, blending with the wood, their constant, violent movement caught my eye-- only in time before I stepped on them.

I've been noticing lately that small animals like termites-- that sounds odd, doesn't it, since we usually don't call insects animals, though obviously they are-- can do tremendous damage to objects much larger themselves, and at amazing speed. A few months back I noticed that a beaver (and I think it was a single beaver) had been taking down first saplings and then grown trees (in an area of wetlands reclamation). But of course anyone who has had squirrels aiming to move into their house will know what I'm talking about. The termites, beaver, and squirrels have no notion of doing damage inconvenient to, say, humans. And of course, conversely, all the necessary, beneficial things animals do for us-- think of bees-- is incidental to their purposes as well. It's a different way to think about "nature" (a construct that gets pretty shaky whenever I start to ask myself whether such a concept is in any way meaningful)-- maybe a much more meaningful focus than that of the long-time romantic focus characterized by the phrase "bloody in tooth and claw." Kind of like the difference between historians who see human history as an abstract construction trying to represent an extremely complex set of extremely complex relations on the one hand, and history as a record of the acts and speech of Great Men, who supposedly determine what kind of lives (and for how long) the rest of us live. Well I'll back the termites over Donald Trump, for instance, any day. 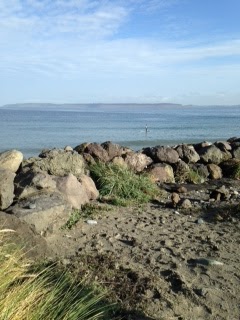 But I didn't start this post with the idea of nattering on about termites. Rather, I wanted to say that I'm on sabbatical, for two months, from Aqueduct Press, which Kath, Tom, and Arrate are generously making possible. One side-effect of having become a publisher is that I haven't had the mental space to work on my own novels. I've had one novel nearly finished since around the time I started Aqueduct, which I just have not been able to finish in the two- or three-week artist residencies I've had over the last few years. And I have a few other novel manuscripts dating from the late 80s and early 90s that Kath and others have been urging me to publish, but that need a bit of work--in one case, a major restructuring--before they're ready for publication. One thing about working on a manuscript I haven't picked up in years is that I can look at it now as though it had been written by someone else. And since I've had a lot of practice reading other people's novel mss since starting Aqueduct, my attitude toward revising my own work has become, how shall I say, authoritative. And because it's my own work, I can be positively lavish in employing my red pen and demanding enormous deletions and substantial rewriting. Need I say that I'm enjoying myself immensely?

Of course I still love Aqueduct and its mission. But it's good sometimes to take a break, especially when doing one thing has been preventing you from doing something else that's also important to you.
Posted by Timmi Duchamp at 8:14 PM No comments:

Jean LeBlanc's A Field Guide to the Spirits

I'm pleased to announce the release of A Field Guide to the Spirits, a collection of poetry by Jean LeBlanc, as a the forty-seventh volume in Aqueduct's Conversation Pieces series. In A Field Guide to the Spirits, poetry becomes a means of time travel in which voices from the past offer insights, reveal secrets, transform our concept of now. These poems explore the interwoven pathways of ghost, memory, imagination, and desire. The spirits visited range from Caroline Herschel and Mary Shelley to Zane Grey and Dashiell Hammet, William Blake to Anne Hutchinson, John Keats to Isaac Newton’s niece. The volume collects fifty-seven poems, forty-four of them original. Aqueduct is releasing it in both print and e-book editions. Check it out on Aqueduct's site.
Posted by Timmi Duchamp at 4:01 PM No comments: