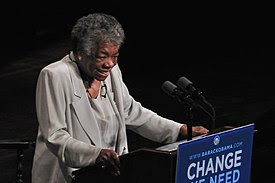 Poet, critical memoirist, jazz singer, actor, producer, screenwriter, Civil Rights activist, and wise elder Maya Angelou died today at age 86. Her best-known work was I Know Why the Caged Bird Sings, which relates her struggle to survive and literally regain her voice following the trauma of being raped at the age of eight and learning that her rapist had been murdered after she named him. She said that she believed that her voice had killed him and that she feared her voice could kill anyone. Caged Bird is also, of course, about the experience of being a black child growing up in the Jim-Crow South. “If growing up is painful for the Southern Black girl," she remarks in that book, "being aware of her displacement is the rust on the razor that threatens the throat."

I had the pleasure of hearing her speak at a women's writers conference in Seattle in the early 1980s. The auditorium literally could not hold all the people who wanted to hear her, meaning that some people had to be accommodated in an overflow space where they could listen to her live over the PA system. She was an electrifying speaker, and the power of her voice was matched by her physical presence. I have a vivid memory of how, before she began her prepared talk, she called out some bad--racist--behavior that had occurred during one of the conference's workshops. I think that may have been one of the first times I ever hear anyone call out a piece of local, specific bad behavior in this way, so openly and publicly, and it impressed me tremendously.

The New York Times' obituary has a video of Angelou's performance of the poem she wrote for President Bill Clinton's inauguration, as well as a slide show and summary of her life and work. Mother Jones is running a piece titled 7 Pieces of Timeless Wisdom from Maya Angelou. In the Guardian, Gary Younge's piece is titled Maya Angelou: American titan who lived as though there were no tomorrow, which begins with a description of how his scheduled 45-minute interview in 2002 turned into 16 hours during which the whiskey flowed freely.The best thing to do to remember her, of course, is to seek out her work.

Posted by Timmi Duchamp at 1:40 PM No comments:

Hitting the Road to WisCon

Yesterday we loaded Kath's car with Aqueduct Press books, and off she drove, heading for Madison. This year at WisCon Aqueduct will be marking its 10th anniversary. Tom tells me that if most humans didn't grow ten fingers and ten toes, 2014 would just be another year for Aqueduct. And part of me feels that it is just another year. But part of me has been hosting the persistent idea that a tenth anniversary is a time for stock-taking--and looking forward. Will Aqueduct exist in another ten years? (When we started, I couldn't imagine our getting to be ten years old.) We have a lot of forward momentum, but the three of us who mostly run the press are in our sixties. So that's something I'm thinking about, too.

To celebrate, we'll be hosting a party on Sunday night. We'll be holding drawings for three prizes: a complete set of the Conversation Pieces series to date; a subscription to The Cascadia Subduction Zone; and a set of two Gwyneth Jones collections-- The Universe of Things and Imagination/Space. We'll also be raffling off a wall hanging made by Kath, celebrating Aqueduct authors and their books, with autographs signed by the authors. (See the photo below of the quilt hanging on one of Kath's looms; it unfortunately doesn't come close to capturing the hanging's charms. We'll be displaying it in the Dealers Room, at our table.) The proceeds from the raffle will be donated to the Carl Brandon Society and the James Tiptree Jr. Award Council. The party will offer other delights as well, including, lubricating beverages and, of course, conversation of the feminist kind (which is not exactly hard to find at WisCon).

Many of Aqueduct's authors will be attending the con, and most of those will be reading. Some of them will be reading together--  Eleanor Arnason, Jennifer Marie Brissett, Nancy Jane Moore, and Sarah Tolmie for the reading titled "Renaissances" in Conference 2, Saturday at 10 a.m., and Liz Henry, Alexis Lothian, Katrinka Moore, Anne Sheldon, and I for the reading titled "Time Cracks" in Conference 2 on Sunday at 1 p.m.

We'll be launching three new books at WisCon this year-- Andrea Hairston's Lonely Stardust, The WisCon Chronicles, Vol. 8: Re-Generating WisCon edited by Rebecca Holden, and Hiromi Goto and N.K. Jemisin's Systems Fail, a numbered, limited-edition chapbook in our GoH series. We'll also be distributing a new issue of the Aqueduct Gazette, which Arrate edited. This issue includes a new essay by Gwyneth Jones, reflections on change at WisCon, interviews with Andrea Hairston and Sarah Tolmie, and "September 1, 2024: A Speculation" by Joan Haran, Kristin King, Josh Lukin, Annalee Newitz, and Kiini Ibura Salaam. We'll be posting a pdf of the issue on Aqueduct's site for free download, after WisCon.

The editor of the next--the ninth!--volume of The WisCon Chronicles will be Mary Anne Mohanraj. Her thematic focus isn't set yet, but she is thinking about intersections and allies, and about living through times of social change, what leads to change (including the frustrations), how we effect change, the strategies for managing change without too much destruction in the process, whether sometimes destruction is necessary, etc.

And finally, I'm pleased to say that Arrate will be joining us this year, for her first WisCon. You'll see her at our table, at the party, and out and about at the con. As you might imagine, I'm looking forward to hearing her comments on the experience. 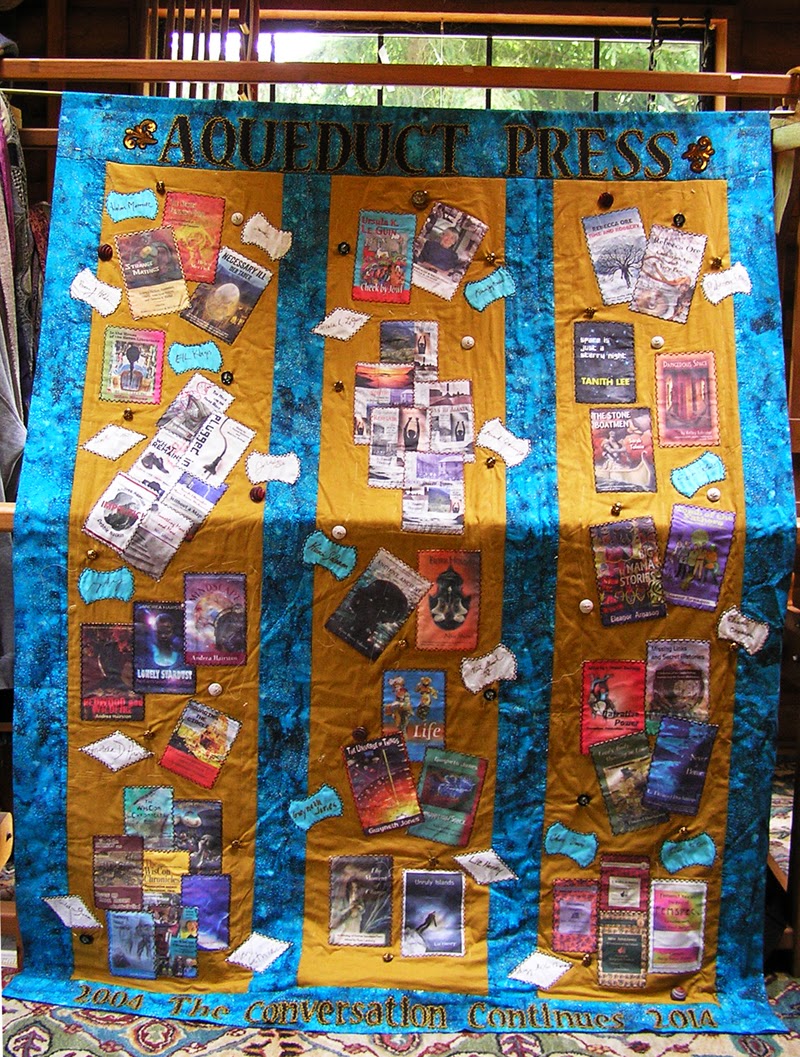 Posted by Timmi Duchamp at 4:22 PM No comments:

On May Day and "Superheroes"

There are reasons to feel hopeful about the small yet important breakthroughs surrounding this year’s May Day in the fight for workers’ rights and, in Spain, the right to protest too. The Catalonian police force, known as Mossos d’Esquadra, are no longer allowed as of May 1 to use rubber bullets for crowd control, a decision that comes too late but is nonetheless welcome in a context in which police brutality in the country has escalated alongside social discontent to tragic degrees. Countless wounded and a death later —the verdict on the death of Iñigo Cabacas at the hands of the Basque riot police after receiving a rubber bullet in the head has been pending for two years— workers could march the streets of Catalonia on International Workers’ Day without fearing to lose an eye, or worse.

Here in Washington State, Seattle Mayor Ed Murray’s announcement of the proposal to increase the city’s minimum wage to $15 an hour seemed like an appropriate backdrop to the May Day march. The proposal, however, will most probably require revising, as Socialist Councilmember Kshama Sawant’s response and the 15 Now campaign clearly show. There is certainly nothing that could justify the three to four years phase to the $15 wage for big companies. 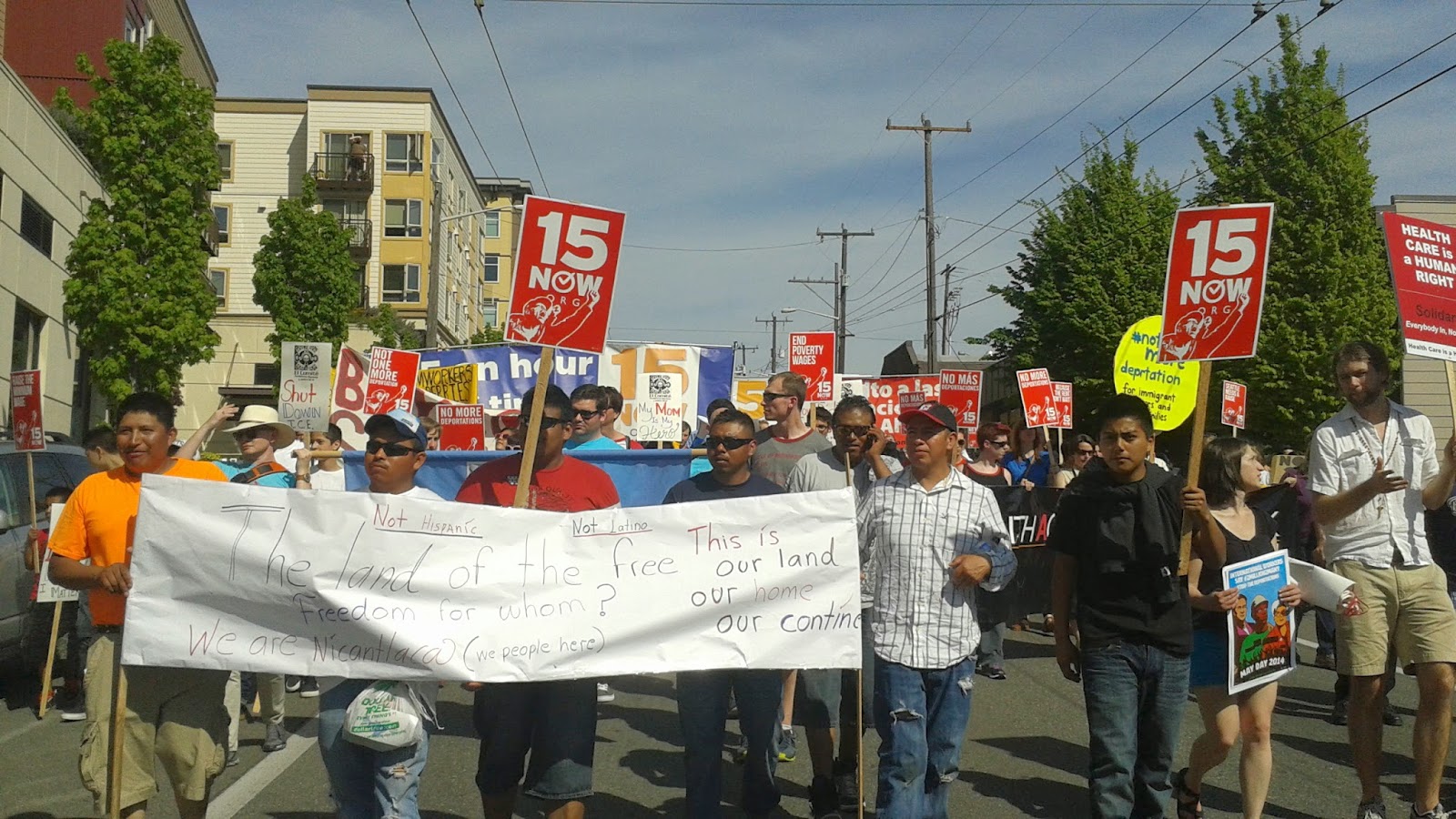 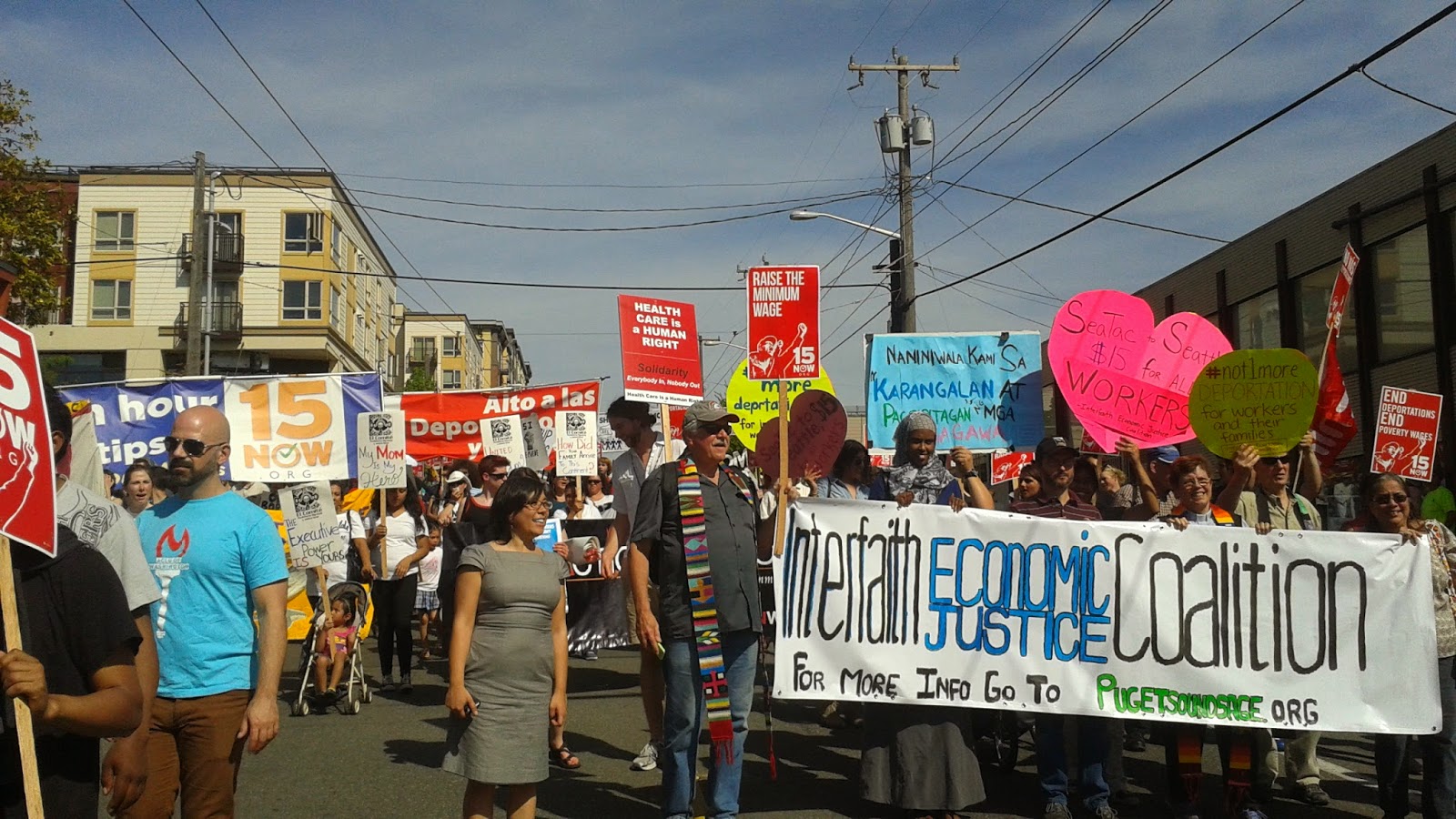 After having spent all May Days of my working life at work, this was my first chance to get out there and march, and the hot, sunny day in Seattle was perfect for it. However, the turnout at the main mobilization by El Comité for workers and immigrant rights started off smaller than what one would have expected by the amount of police that escorted it. Led by the traditional Aztec Ce Atl Tonalli dancing group, the march gathered hundreds of people of diverse backgrounds calling for fair labor practices and, especially, for an end to the deportation of undocumented immigrants, which have already exceeded 2 million under the Obama Administration and have resulted in thousands of children being deported alongside their parents or left in foster care. Earlier in the morning, a solidarity rally had been held at the Northwest Detention Center in Tacoma, 56 days after detainees had begun a series of hunger strikes to bring attention to the abuse and harsh conditions they must endure.

The march concluded uneventfully and on a hopeful note in a rally at Westlake, while smaller, unofficial anti-capitalist protests took over in the evening and inspired reports from all points of the political and journalistic spectrum. One popular interpretation for the evening’s events is that of superheroes vs anarchists/marchers, which is an undeniably catchy tag, albeit far from the truth. Indeed, Seattle has its own league of vigilantes, even though it never asked for one, and the implications of such individuals’ interfering in situations in which the police is involved may seem more harmless, with what the comic book attires, than they actually are.

The Rain City Superhero Movement is a group of costume-clad individuals who patrol the streets at night with the claim of preventing crime. Founded by Phoenix Jones, who calls himself Guardian of Seattle and whose writing emulates that faintly disturbing sense of entitlement of, say, Batman’s internal monologues, the group seems to overlook the fact that what belongs in comic books may not be sensibly applied to real life, to say the least. Leaving aside the scent of megalomania around Phoenix Jones’ persona, the fact is that a group of people who claim to be protecting the city from anarchists serves no purpose but to create even more misleading images of what the act of protesting actually stands for. On the grounds of defending the city, which in many cases translates into defending property, Jones has been known to pepper-spray protesters (around minute 26).
While the presence of masked "superheroes" meddling between riot police and protesters could seem just a nuisance that makes the officers' job harder, their potential to help justify actions taken by the police can’t be ignored. Phoenix Jones and his team are, after all, civilians, and hence unconstrained by the limits of policies and procedures, free to act and immediately seek refuge behind the police line, often provoking conflict and police response.


This is now, more than ever, a time for collective action. Can we really afford to celebrate or even chuckle at “justice-making” that regards the people, as too many riot police agents do, as their enemy?
Posted by Arrate at 7:45 PM No comments: