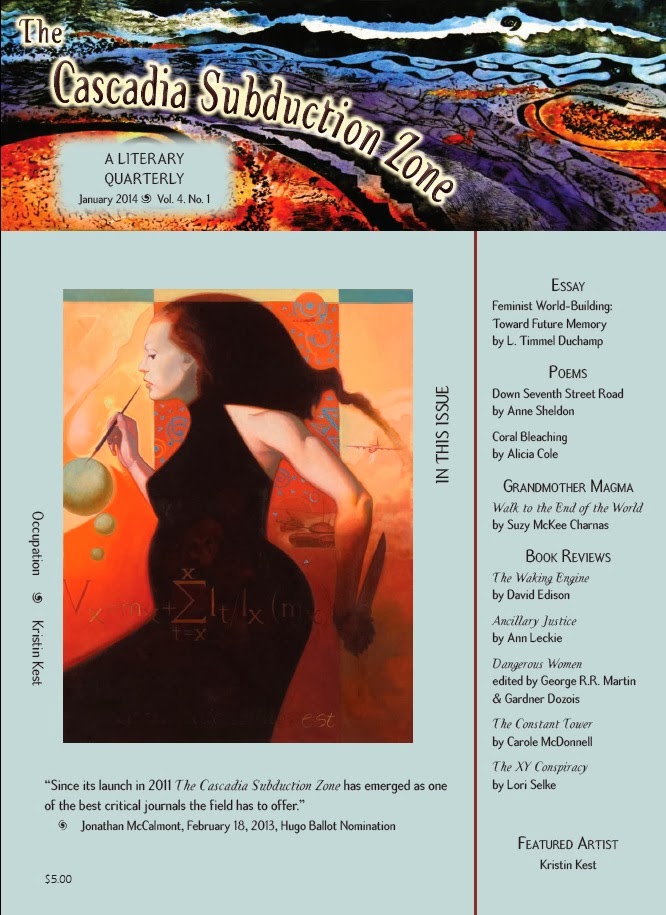 The winter issue of The Cascadia Subduction Zone is out. You can purchase the issue for $3 (or subscribe for $10) at http://www.thecsz.com/. The issue features the art of Kristin Kest; reviews by Victoria Garcia, Cat Rambo, Karen Burnham, Michael Ehart, and Cynthia Ward; a Grandmother Magma column by Nisi Shawl; a poem by Alicia Cole and a poem cycle by Anne Sheldon; and an essay by me, reporting on the Worlds beyond World Symposium in Eugene last November.

Coral Bleaching
by Alicia Cole
Grandmother Magma
Walk to the End of the World, by Suzy McKee Charnas
by Nisi Shawl
Reviews
The Waking Engine, by David Edison
reviewed by Victoria Garcia

The Constant Tower, by Carole McDonnell
reviewed by Michael Ehart


Rewriting the rules that define/constitute the fantasy we call reality in order to dismantle colonial structures and transform said reality is an incredible challenge. Black to the future was/is a radical, dangerous, and daring dream—an impossibility. Science fiction and fantasy (sf&f) is a rehearsal of the impossible, an ideal realm for redefinition and reinvention. For Africans and their descendants in the diaspora, decolonizing our mind/body/spirits was/is an on-going sf&f project. Freedom is a Magic If. Indeed, for all of us, humans, non-human animals, and plant-life, recovering the past and decolonizing the future is a critical survival question in the subjunctive case. How might we coevolve, but be different, together in a (post)colonial empire hell-bent on global monoculture, the commodification of identity, and the monetization of everything? What of our past should we carry with us? What might we chose to leave behind? What new possibilities could we embrace and manifest?

Posted by Timmi Duchamp at 9:53 PM No comments:

In honor of its fortieth anniversary, Humanities Washington has begun posting a series of Top Ten lists, "sharing the best of the best from a variety of humanities topics from the past 40 years." Their inaugural list is from Anu Taranth, who offers a "Top Ten Pacific Northwest Authors of Color" list. The list names our own Nisi Shawl, and specifically cites Filter House. Do go and check out the whole list here.
Posted by Timmi Duchamp at 10:46 PM No comments:

Quote of the day

I'm pleased to announce the release, as the third volume in Aqueduct Press's Heirloom Books series, of a new edition of New Amazonia: A Foretaste of the Future, a feminist utopian novel by Elizabeth Burgoyne Corbett originally published in 1889, which includes an introduction by scholar Alexis Lothian. “Corrupt, Degraded, Rotten to the core is British Civilisation, and yet we find women who ought to know better, actually pretending that they are perfectly contented with the existing order of things,” declares the narrator of New Amazonia. Raging against an antifeminist statement signed by “ladies” opposing the cause of women’s suffrage, a writer falls asleep in 1889 and wakens, in company with a hashish-smoking “masher,” in a future world run by women. New Amazonia tells the story of how this future world came to be and reveals its shiny, futuristic marvels as well as its government-administered horrors.

“When Elizabeth Burgoyne Corbett sat down in the late 1880s to imagine a world 500 years hence, she can little have imagined that her words would be pored over in another century, on another continent, in a community gathered around the kinds of imaginative engagement with gender that she was pioneering. L. Timmel Duchamp has described feminist science fiction as a "great conversation”; Corbett’s speculations about New Amazonia are part of that conversation’s prehistory, a fictional contribution to political debates with which the writer was intensively engaged. The book you are holding is a piece of utopian fiction, but it is just as much a feminist rant––entertaining, educational, and more than a little over the top.”—from the Introduction by Alexis Lothian

New Amazonia is available now through Aqueduct's site (http://www.aqueductpress.com/books/NewAmazonia.php) in trade paperback and e-book editions. While it is also available online in public domain pdf files (and printed and bound pdf files) of the original 1889 edition (sans Alexis's illuminating introduction), those pdf reproductions are not easy to read. My decision to bring the book back into print was based on a combination of my desire to draw attention to this early feminist utopia (of which I knew only its bare existence until Alexis talked to me about it) and the need for a more readable version of the text.

Posted by Timmi Duchamp at 1:34 PM No comments:

Jane Irwin's graphic novel, Clockwork Game, has just been released. It can be purchased in both trade paperback and pdf editions at http://www.fierystudios.com/store/. Here is Nisi Shawl's introduction to it:


Into the Canny Valley
by Nisi Shawl

The truth is right there in a word balloon on page 165.  “People believe stories, not facts,” says Johann Maelzel, one in a series of owners of “The Turk,” the figure at the center of the real-life, 85-year conspiracy depicted in Clockwork Game.  Telling The Turk’s strange story through expressive drawings and apt words, Jane Irwin makes us believe everything, from its first appearance before 18th-century Vienna’s royal court up to its blazing finale in 19th-century Philadelphia.  There’s the supposed chess-playing automaton’s match against Benjamin Franklin, Napoleon’s pragmatic skepticism when presented with The Turk in the wake of his Austrian victories, and Edgar Allan Poe’s article debunking the claim that its prowess was that of a pure machine.  The Turk rubbed elbows with Beethoven and shared an exhibit hall with P.T. Barnum’s Joice Heth, who the fledgling impresario said was the 161-year-old former nurse of President George Washington.

But to paraphrase Maelzel’s lead-up sentence to the aphorism above, the story’s telling is what Jane Irwin gets right.

The Ottoman Empire had a long and glorious tradition of engineering marvels and expanding scientific knowledge.  Irwin makes this tradition concrete in the book’s opening pages with a charming sequence showing Al-Jazari’s elephant clock in operation, complete with dragon heads and drummer.  In 19th-century Philadelphia, Turkish-American doctor Yusuf bin Ibrahim provides another lens on the racially-charged lampoon its inventor created in his ostensible automaton.  Again and again Irwin challenges herself to question comfortable assumptions, looking at The Turk’s career through the eyes of those so often classified as “others”: workers, women, people of color, the physically disabled.  Again and again she enriches the telling of this fascinating tale by doing so; Clockwork Game is simultaneously funnier and more tragic than readers may expect.

In the field of human aesthetics, the “uncanny valley” is the dip in the graph of our tolerance of human simulacra.  We react with rising positivity to dolls and robots as they become more and more like us--up to a certain point.  At that point there’s a drop-off in acceptance, a sinking into revulsion.  Too lifelike, yet not alive, inhabitants of this figurative valley are uncanny in appearance.  If their similarity to us is developed further and continues to grow, the positive reaction reasserts itself and the graph line trends upward again.


Wolfgang von Kempelen, The Turk’s inventor, despised what he’d created as a fraud, “base trickery.”  Discussing one of his “serious” devices he bemoans the way audiences focus on the odd appearance of his Speaking Machine, explaining that he’d frequently begin demonstrations with its wheezing bellow and nostril-simulating tubes covered by a sheet.  He tells a sympathetic visitor that he hopes eventually to hide the apparatus inside the dummy of a young girl’s body.  I think doing this would have been a mistake; a human-looking doll that spoke would have been far too disturbing to people of that time.  The Turk was saved from inhabiting in the uncanny valley by several factors: the clockwork noises made during its operation; the standing invitation to inspect its inner workings and thus disregard its outward appearance; and its likeness to an exoticized other, which allowed the intended viewers to distance themselves from it rather than identify with it.  These dehumanizing elements kept The Turk on the valley’s far side.

What I call the canny valley--without any experiments or charts to back my theory up--is the sweet spot authors aim for between data and whimsy.   Clockwork Game sits in the canny valley’s exact center.  Here the dip represents a fall in resistance to the unfamiliar.  Beginning with sheer nonsense, what writers and artists offer becomes more captivating as it encompasses more verifiable facts--but not too many.  There is a place on this imaginary graph where, suddenly, facts take on the allure of fantasy and speculation the weight of certainty.  Clockwork Game’s dramatic framing and quick pace make it easy for the book to fulfill our innate biological hunger for narratives, and Irwin’s art—particularly her characters’ enchantingly expressive faces—fleshes out the mere names and dates that would have comprised her initial research.  And that research was both broad and deep, as can be ascertained by referring to her twelve pages of notes and four of bibliography.  It included books, videos, websites, and consultations with people knowledgeable in areas such as Turkish culture and the representation of diversity in fiction.

Composer and comedian Neil Innes once famously said, “I’ve suffered for my music.  Now it’s your turn.”  It was a joke, but other creative artists have sometimes had to strive to avoid meaning something similar—especially when they do lots research to support their projects.  They’re drawn to the far side of the canny valley, the dry and tortuously infertile terrain of facts for facts sake.  A book filled with nothing but the poorly presented results of research will beguile very few of us to spend our precious time struggling through its pages.  Resistance will be high.

Irwin’s motto might well be “I’ve been suffused with pleasure for my work’s sake.  Now it’s your turn.”  Though she carefully describes when, where, how, and why she departed from what’s known about The Turk and its many adventures, she keeps these notes out of the story’s way, confining them to Clockwork Game’s after matter, where they rightfully belong.  This leaves us free to luxuriate in the delightful greenery where the story proper grows—to speed through it or linger, to return to the canny valley as often as we like.

Posted by Timmi Duchamp at 10:55 PM No comments: