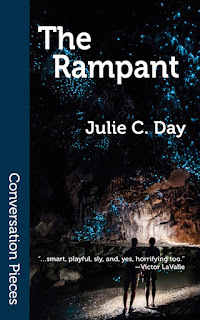 I'm pleased to announce the release of The Rampant, a novella by Julie C. Day, as the sixty-ninth volume in Aqueduct's Conversation Pieces series. It's available now in both print and e-book editions at http://www.aqueductpress.com.

It’s ten years since the hordes of old-world Sumerian gods arrived in Southern Indiana to kick off the end of the world, but things have not gone to plan. A principal player decided not to show. Now humanity is stuck in a seemingly never-ending apocalypse. Sixteen-year-old Emelia Bareilles and Gillian Halkey are determined to force a change, even though it means traveling into the lands of the dead.


Read a sample from the book here".

“I loved the epic journey of our two teenaged lesbian he¬roes, Gillian and Emelia, through the sprawling horrors of the Sumerian afterworld. The clash of their modern feminist sensibilities with the cruel and rigid theocracy of the very oldest gods out-weirds much of the New Weird. In The Rampant, Julie Day calls us to visit a fantastical landscape in a voice that is hers alone.”
— James Patrick Kelly, winner of the Hugo, Nebula, and Locus awards

“The Rampant was so much fun to read! Is that the right way to blurb a horror novel? I don’t know, but it’s the truth. Julie Day’s novel is smart, playful, sly and, yes, hor¬rifying too. A short gem of a book.”
—Victor LaValle, author of The Changeling

“The girl-powered post-apocalyptic Sumerian under¬world quest I didn’t know I needed.”
— Sarah Pinsker, winner of the Nebula and the Theodore Sturgeon Memorial Award

“The Rampant is one of the most original Apocalypse tales I’ve read in ages. Julie C. Day avoids cliché and gives the reader the end-times by way of Sumerian myth—except this particular end-of-the-world stalls when one of its principal players decides not to show up. What unfolds is a journey into the underworld filled with joy and hor¬ror, hope and loss. It’s a wise and lovely story—exactly what I’ve come to expect from Day.”
—Nathan Ballingrud, winner of the Shirley Jackson Award; shortlisted for the World Fantasy, British Fantasy, and Bram Stoker Awards.


Equal parts playful and heartbreaking, this apocalyptic novella offers one-of-a-kind answers about the end of the world. Gillian Halkey and Emelia Bareilles, both 16, have spent most of their lives enduring the nightmare of the never-ending rapture. It’s been a decade since the ancient Sumerian gods descended on Indiana, promising that the chosen people would ascend to Nibiru, but the terrifying entity called the Rampant—the last of the Evil Messengers heralding the destruction of civilization—seems to have missed the memo. Until he shows up, the rapture can’t happen. Meanwhile, bored gods are eating people. It’s up to Emelia and Gillian to descend to the Netherworld, using Gillian’s prophetic dreams as guidance, in hopes of liberating the Rampant so the judging can begin and the suffering can end. Mixing a coming-of-age and a second coming, the story is unmatched in its idiosyncrasy. Day conveys genuine empathy for the two young women, who are still learning about themselves (including a sweet crush of Gillian’s), while never relinquishing the archaic fear instilled by the presence of ancient gods and the televangelists who have smoothly pivoted into running the Sumerian Revivalist Church. This clever and surprisingly fun take on the rapture is the perfect theological horror story.   —Publishers Weekly, Aug 12, 2019

Mel and Gillian feel very much like real people; they aren’t superheroes, they’re teenage girls doing their best to cope in a weird and messed up world, dealing with the loss, and a daily existence that is anything but normal. Their heart and determination, and their bond with each other, carries the story through. Day perfectly balances dark and light in The Rampant, and offers up a fresh take on apocalyptic fiction that draws on ancient mythology and literature to create something that feels completely original and new.-   (Read the whole review)   —The Book Smugglers, A.C. Wise,  August 2019
Posted by Timmi Duchamp at 12:00 PM No comments: