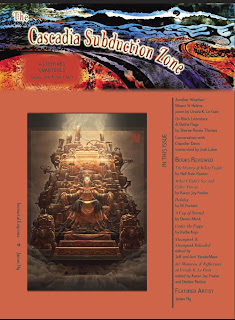 I'm thrilled to announce the debut of a new zine from Aqueduct Press: The Cascadia Subduction Zone. (The table of contents can be found below, as well as here.) Although I am, I suppose, its founder, this is not a publication I'm actually in charge of. After much struggle about what the zine's editorial organization should look like, it emerged as a collective of four editors:


Aqueduct Press offers both print and electronic single issues and subscriptons here. After six months, back issues will be posted in an electronic archive, downloadable free of charge.

Here in the Pacific Northwest, we live in the Cascadia subduction zone, with massive, almost unimaginable earthquakes lurking in our past and looming in our future. Frequently we experience “slow earthquakes” moving the earth beneath us, imperceptible to humans except through technology. Occasionally a mountaintop blows, awing us with its power. The denser plate of oceanic crust—the Juan de Fuca Plate—is being forced deep into the Earth's interior beneath the North American continental plate in a process known as subduction, and as the plate encounters high temperatures and pressures that partially melt solid rock, some of this newly formed magma rises toward the Earth's surface to erupt, forming a chain of volcanoes above the subduction zone. (Brantley, 1994, Volcanoes of the United States) Humans like to think of the earth as the ultimate symbol of stability: hence the cliché “down-to-earth.” But in the Cascadia subduction zone, “down-to-earth” necessarily means something else. To be grounded, here, is to be ever mindful of the plates shifting below us, slipping and striking and moving magma, of sloping fault lines that separate and yet merge, of one plate being inexorably pushed beneath another, with enormous consequences.

The Cascadia Subduction Zone aims to bring reviews, criticism, interviews, intelligent essays, and flashes of creative artwork (visual and written) to a readership hungry for discussion of work by not only men but also women. Work by women continually receives short (or at best inadequate) shrift in most review publications. And yet the majority of readers are women. As Ron Hogan writes in an August 2011 post on Beatrice.com, “[Jennifer]Weiner and [Jodi] Picoult, among others, are giving us a valuable critique of a serious problem with the way the [New York] Times [Book Review]—and, frankly, most of the so-called literary establishment—treats contemporary fiction. Which is to say: They ignore most of it, and when it comes to the narrow bandwidth of literature they do cover, their performance is underwhelming, ‘not only meager but shockingly mediocre,’ as former LA Times Book Review director Steve Wasserman said three years ago. And it hasn’t gotten any better since then, leaving us with what Jennifer Weiner describes as “a disease that’s rotting the relationship between readers and reviewers.”

The relationship between readers and reviewers interests us. We want to bring attention to work critics largely ignore and offer a wider, less narrowly conceived view of the literary sphere. In short, we will review work that interests us, regardless of its genre or the gender of its author. We will blur the boundaries between critical analysis, review, poetry, fiction, and visual arts. And we will do our best to offer our readers a forum for discussion that takes the work of women as vital and central rather than marginal. What we see, what we talk about, and how we talk about it matters. Seeing, recognizing, and understanding is what makes the world we live in. And the world we live in is, itself, a sort of subduction zone writ large. Pretending that the literary world has not changed and is not changing is like telling oneself that the world is a solid, eternally stable ball of rock.

Welcome to the Cascadia Subduction Zone
by the Editors

A Conversation with Chandler Davis
transcribed by Josh Lukin

What I Didn't See and Other Stories by Karen Joy Fowler
reviewed by L. Timmel Duchamp

A Cup of Normal by Devon Monk
reviewed by Cynthia Ward

Under the Poppy by Kathe Koja
reviewed by Rachel Swirsky