I'm pleased to announce the release, in conjunction with WisCONline, of the twelfth volume of the WisCon Chronicles, Boundaries and Bridges, edited by Isabel Schechter and Michi Trota. It's available now in both print and e-book editions at www.aqueductpress.com.


The twelfth volume of The WisCon Chronicles explores our understanding of boundaries and bridges, and what they mean for us as individuals and for our communities. This collection includes essays from first-time WisCon attendees and former Guests of Honor, fans and Tiptree/Otherwise Award-winning authors and editors, cis het and LGBTQ+ attendees, affluent and less well-off, abled and disabled, white and POC, young and old, parents and child-free, English speakers and Spanish speakers, and hopefully more than just these categories can capture.

Structural changes in the convention that break down barriers to attendance and participation are important, and some of the essays recount the process and struggles of creating space and programming for POC attendees, access for disabled attendees, and affordability for all attendees. The words we use matter, as essays that talk about feminist terms, gendered language, and even the name of the Tiptree/Otherwise award (which is almost inextricably identified with WisCon) demonstrate. The definition of “community” is also examined, both within WisCon and beyond, as it spills out into the wider world — including online spaces. 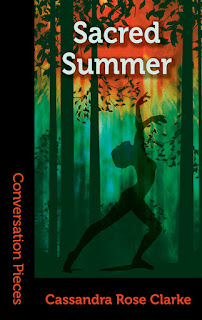 I'm pleased to announce the release of Sacred Summer, a novella in verse, by Cassandra Rose Clarke, in both print and e-book editions. Sacred Summer is the seventy-fifth volume in Aqueduct's Conversation Pieces series. You can purchase it now at www.aqueductpress.com.


In the empty halls of a house on the edge of the woods, a dancer faces the aftermath of a career-ending injury and subsequent divorce. Twenty years earlier, on the land where her house would be built, two boys died violently and mysteriously while recording a music video for their band, leaving one survivor. Something sleeps in the woods beyond the house, and when the dancer finds the last musician, it will start to wake…

Read "Ballet, Suburbia, and Death Metal: An Interview with Cassandra Rose Clarke" by T.D. Walker here.
Posted by Timmi Duchamp at 11:31 AM No comments: 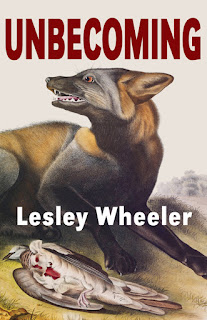 I'm pleased to announce the release of Lesley Wheeler's debut novel, Unbecoming, from Aqueduct Press in both print and e-book editions. Readers may remember the author's Conversation Pieces volume The Receptionist and Other Tales (2012), which appeared on the Tiptree Award Honor List. The book is now available through Aqueduct's website: www.aqueductpress.com.


Read a sample from the book.

What if women gained uncanny power at middle age? In Unbecoming, Cyn’s family is shattering, and she is at war with her own body. Then, when her best friend flies off on a mysterious faculty exchange program, a glamorous stranger takes her place—Fee Ellis, a Welsh poet who make it all look easy. But it may be costly to welcome this charismatic outsider to their little college town. Cyn’s best friend, meanwhile, communicates only in ominous fragments.

“Lesley Wheeler’s Unbecoming is a delightful, beautifully written 21st-century gothic novel set at a Virginia university and also in the borderlands between the literal and the metaphorical, between the realistic and the fantastic. Like all universities, this one is a school for wizards and conjurers. Professors offer portals to undiscovered countries and enchanted lands. Portals lead to demons and horror and death too. Cynthia has recently become English Department Chair. She’s perimenopausal and coming into her blood-magic, witch woman power. The English Department is a tiny realm, fighting other more powerful realms at the University that would swallow any beleaguered humanities discipline. How do we survive each other, resist the demons or easy escape to a deadly realm that could destroy us? How do we conjure a path to the world we want? Lesley Wheeler says, ask the poets and the painters!”
—Andrea Hairston, author of Will do Magic For Small Change and The Master of Poisons

“The story of a woman leading an ordinary life who discovers within herself extraordinary powers, Unbecoming is sage, funny, and warm, like a long conversation with your best friend about all the strange and wonderful things that have been happening to her lately. Lesley Wheeler’s writing is so deft and magical that I’m convinced that she must have learned it from the fairies. This smart, beguiling debut fantasy casts a spell that readers won’t want to break.”
—Emily Croy Barker, author of The Thinking Woman’s Guide to Real Magic and How to Talk to a Goddess

A middle-aged college professor taps into her magical ability in the midst of personal and professional chaos in this excellent feminist fantasy from Wheeler (The Receptionist and Other Tales). Cynthia’s world is falling apart. She’s suffering through hot flashes, her husband’s off in North Carolina, her teenage children are testing their wings, and her best friend, Alisa, has left on a mysterious faculty exchange program with a remote college in Wales. Stepping into Alisa’s professorial role at Cynthia’s small liberal arts college in Virginia is the oddly charismatic Sophia “Fee” Ellis, whose strange behaviors (sleeping outside, causing dogs to bark, looking right at anyone whispering about her even when she couldn’t have overheard) quickly become the talk of the English Department. As the bizarre happenings around Fee grow more extreme and Alisa proves impossible to reach, Cyn realizes that everything she wishes for, intentionally or no, seems to be coming true. Cyn will need help to understand what’s happening to her, but can she trust the secretive Fee for guidance? Wheeler’s prose is gorgeous and her characters are marvelously detailed. Cyn is by turns sarcastic and serious but always empathetic, and the mysterious Fee is surprisingly down-to-earth for all her arcane knowledge. Readers will be taken with this powerful and deeply satisfying tale. (Starred Review)    —Publishers Weekly, April 2020

Lesley Wheeler is an accomplished poet and a named professor at Washington and Lee, so it probably shouldn’t be a surprise that her first novel is peppered with striking language (‘‘She was already a ghost of linen and warm air’’; kids ‘‘flock and wheel’’) and shrewd portraits of some familiar denizens of academia. Wheeler’s major previous venture into fantasy, the narrative poem ‘‘The Receptionist’’ (in The Receptionist and Other Tales, also from Aqueduct Press) cleverly and at times hilariously borrowed the language of high fantasy to describe academic politics and misbehavior, and it not only ended up on the Tiptree honor list, but drew praise from the likes of Ursula K. Le Guin and Gwyneth Jones. Her first novel, Unbecoming, is also framed largely as a satirical academic tale, but one leavened with more than a bit of witchery and magic, principally the notion, which begins to haunt the narrator, that certain women entering middle age somehow develop magical powers. We’re told early on that Cynthia (or Cyn) Rennard, the chair of English at a respected Virginia university, is perimenopausal (a condition which she describes as ‘‘more taboo than serial killings, less plausible than vampire tales’’), and not long afterward she seems to psychokinetically prevent a car from striking her teenage son. Of course, she begins to wonder if there might be a connection

But there are broader hints of mythical pow-ers afoot. Cyn’s closest friend Alisa is off to Wales on an exchange professorship, and the Welsh professor who arrives in her place is a rather mysterious and glamorous figure named Sophia Ellis, who settles in a bit too quickly and enthralls fellow faculty, to the point where one eventually proposes to her. Not too subtly, she calls herself Fee (and later we’re reminded that Cynthia’s last name, Rennard, also carries some folkloristic weight, underlined when she decides to dress as a fox to attend a costume party being thrown by Fee). Meanwhile, Alisa’s increasingly sparse communications from Wales begin to take on a vaguely ominous tone, while some odd little watercolors in Alisa’s house – now occupied by Fee – seem to assume some magical, portal-like qualities. And Cyn’s own possible ‘‘blood magic’’ (as Fee calls it) apparently begins to have darker results. Is Fee in fact a ‘‘changeling professor,’’ as her local nickname has it? Is Cyn’s blood magic real, along with the hints of shape-shifting and portals to other realms? --Gary K. Wolfe, Locus, May 2020
Posted by Timmi Duchamp at 1:50 PM No comments: