"The genre would have been very different without her": a notable centennial 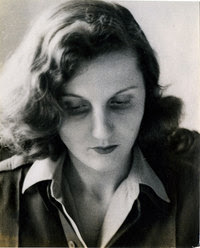 Today is the one hundredth anniversary of the birth of Alice Bradley Sheldon, aka James Tiptree Jr., aka Raccoona Sheldon (August 24, 1915 – May 19, 1987). Since the revelation in late 1976 that James Tiptree Jr. was a 5' 8" sixty-one-year old woman, Tiptree has been a figure of interest more for what Tiptree biographer Julie Phillips calls Sheldon's "double life" than for Tiptree's work. I'm always a little sad to re-discover that many people who know what the Tiptree Award is haven't actually read Tiptree's work. And so I'd like, on this occasion, to quote Jo Walton on that work:

Tiptree was constantly pushing the boundaries of science fiction. “The Girl Who Was Plugged In” (1973) prefigured cyberpunk—it’s one of the three precursor stories, with John M. Ford’s Web of Angels and John Brunner’s The Shockwave Rider. “Love is the Plan, the Plan is Death” made a space for Octavia Butler’s later writing about aliens and sex and identity. “And I Awoke and Found me Here” did the same for Varley—-- for a lot of the writers who came into SF in the later seventies and the eighties Tiptree was part of their defining space, and the genre would have been very different without her. Science fiction is constantly a dialogue, and her voice was one of the strongest in the early seventies, when everything was changing. She wasn’t a New Wave writer, and in many ways she was very traditional, “And I Have Come Upon This Place” could have been written by Murray Leinster, except for the end. She wrote what she wrote and expanded the possibilities for all of us. Science fiction would be very different without her. (What Makes This Book So Great, p. 318.)


To mark the centennial of this great writer, Twelfth Planet Press is releasing Letters to Tiptree, edited by Alisa Krasnostein and Alexandra Pierce.The volumes includes contributions from 35 persons (who, by the way, number several Aqueduct authors), archived letters from Ursula K. Le Guin, Joanna Russ, and James Tiptree Jr./Alice Sheldon, excerpts from The Secret Feminist Cabal: A Cultural History of Science Fiction Feminisms by Helen Merrick, an excerpt from The Battle of the Sexes in Science Fiction by Justine Larbalestier, and an essay by Michael Swanwick.
Posted by Timmi Duchamp at 5:00 AM No comments: 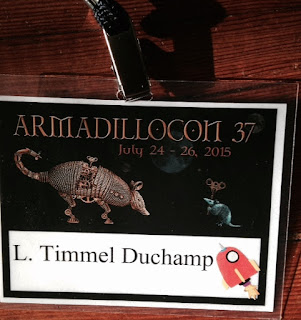 Two weeks ago I attended Armadillocon 37, as the Editor Guest, in Austin, Texas. I had a wonderful, busy time and lots of interesting conversations. On Thursday evening, on arrival I was greeted with warm Texan hospitality and a delicious meal, met my fellow Guests, including Artist Guest Rocky Kelley (who designed the Program Book cover, from which the cool figures on our badges were taken), and was pleased to discover from some of the members a long-running Austin book club that they had read Alanya to Alanya earlier in the month. Friday started early for me, for the con takes their writing workshop, run by Marshall Ryan Maresca, very seriously, and devotes most of a day to it. All the Guests who were writers (Stina Leicht, Ken Liu, James Morrow, and myself) were instructors in the workshop, along with several other writers and critics. The workshop featured, in addition to the usual critique sessions conducted by two instructors and four or five students, three lively panel sessions in which all of the instructors discussed narrative structure, when to shift directions in or jettison writing projects, and, closing out the workshop, aspects of the business of writing.

On Friday evening, the con held its opening ceremonies, during which Toastmaster Stina Leicht introduced the other Guests and delivered a heartfelt speech on the importance of diversity for science fiction. Saturday, at noon, I joined Nancy Jane Moore, Cynthia Ward, and Jacob Weisman of Tachyon Publications in a panel titled "How to Sell a Book to Aqueduct Press"; the four of us talked a lot about independent-press publishing in general, as well as Aqueduct Press in specific. Saturday mid-afternoon, I participated in a game-show format pitting "Pros" against "Fans." I was certain the Fan team would wiped the floor with us--but no. To my astonishment, we routed them. As Stina, who hosted the game, warned us, our job was to guess the answers written on the surveys con-goers had filled out, which needn't actually be "correct." It was a weird experience, I can tell you, when for the category of "Feminist SF Writers," the number-one answer was...me. (Ursula Le Guin was number 2.) In my penultimate programming item, Chris Brown and Madeleine Rose Dimond interviewed me. (See below.) And on Sunday afternoon, I read a portion of "A Question of Grammar" from Never at Home and--because I'd been allotted an entire hour for my reading--had the pleasure of engaging in a fascinating conversation with my small audience.

The programming was rich in readings, I'm happy to say, even if most of those I attended didn't attract large audiences, not least because there were often two readings going on at the same time, in addition to panels. Of the panel programming, I was most interested in attending the panels on feminist sf (which were well attended)-- one on "classical feminist sf," another titled "Badass, Babe, or None of the Above; Are Women's Archetypes Evolving (or Not) in SF/F Literature?" and "New Feminist SF." In two of these Marguerite Reed adopted the role of contrarian, which nudged the discussion into unexpected places. I also especially enjoyed the panel on Alternate History, with Chris Brown, Madeleine Rose Dimond, C.J. Mills, Katharine Eliska Kimrbiel, and Howard Waldrop.

And of course, as always happens at cons, I enjoyed numerous conversations in the lobby, halls, dining room, con suite, and at the bar in the lobby, filling my head with thoughts I carried back with me to Seattle.

Although I took notes on the panels I attended, when I got home I discovered I couldn't sufficiently decipher my own hurried scrawl to make sense of them. But, though I can't offer you cogent summaries of the panels I attended, I can offer you the recording Chris Brown made of my Editor Guest interview-- or, rather, a link to it. (Although it is easy to post videos on this blog, audio recordings are something else...) You can find the recording of the interview on my website, here: http://ltimmelduchamp.com/ltimmelduchamp.com/interview-Armalillocon.

Posted by Timmi Duchamp at 6:46 PM No comments: