The Pleasures of Reading, Viewing, and Listening in 2010, pt. 22: Veronica Schanoes

Favorites of 2010
by Veronica Schanoes 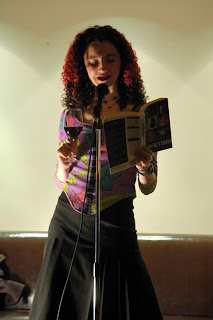 When Timmi emailed me to ask me to contribute to this yearly round-up, I was but a babe in the woods—drunk with the thrill of having been asked to write for her blog, I blithely agreed. “Sure!” I thought to myself. “I can do this easily. How hard could it be to recount my favorite books/movies/music/tv shows of 2010 in a witty and entertaining manner?”

And then I ran into a problem.

I find this very embarrassing. I mean, I’m literally a college professor—more than that, I’m an English professor. I read books for a living. I am also a writer. Surely I must have read something this past year, right? Or at least…been to a movie?

My memory was about as revealing as a brick wall.

What have I been doing all year, I asked myself?

The answer: grading papers and moving house. When I wasn’t doing one, I was doing the other. I was either unpacking boxes or correcting misused semicolons, arranging furniture or hopelessly writing “What do you mean here?” in the margins of somebody’s mangled grammar.

Part of the problem, I think, is that as a professor, I don’t really think in terms of years, at least not of the January to December 2010 variety. I think in terms of school years and summers. As far as I’m concerned, we’re right smack in the middle of the year right now, the 2010-2011 year. When I cast my mind back over the “year,” I think back through September. If I make a major effort, I can remember back through the summer. Before that? That’s the misty reaches of “last year” to me. I just have no idea.

This has long been a problem of mine. Whenever I watch Law and Order reruns, I often find myself wondering what I could possibly say if two homicide detectives came up to me and asked me what I was doing two weeks ago on Monday at 3:30 PM. Because I would have no idea what I would have been doing, and then they would arrest me, and I would go to jail.

After much consultation with my friends and cudgeling of my brain, I was able to recall several movies and books that I read this year that I didn’t like, but let other pens dwell on boredom and misery. I shall skip to the few things I can recall that I did like. Here is what I have managed to piece together:

(1) I read a bizarre Chilean version of “Snow White” called “Blanca Rosa and the Forty Thieves,” which really highlights the creepy necrophiliac aspect of the prince. In this version, the prince “tenderly remove[s] the body [of Blanca Rosa from the coffin] and place[s] it on his bed, where he [strips] it of its clothes.” Eventually he finds the poison needle in her head that is keeping her dead and removes it. Blanca Rosa, “seeing herself alone with this man she had never met, and totally nude,” begins screaming and “insist[s] on leaving,” so the prince actually drives the poison needle back into her head, killing her again. At the end, she marries him. Obviously. (Pino-Saavedra, Yolando. Folktales of Chile. Trans. Rockwell Gray.)

(2) A wonderful fairy tale called “The Wood Maiden,” in which a girl named Betushka goes to a forest to tend her sheep and spin. Just as she is about to do so, a woman appears, “the most beautiful maiden she had ever seen,” and invites her to dance. Betushka is so besotted with this woman that she blows off her work in order to dance with her. And she’s rewarded for this! I like a fairy tale whose moral is that young women should neglect their work in order to “dance” with their beautiful girlfriends. But you need to be careful—never break faith with your beloved…(Ragan, Kathleen. Fearless Girls, Wise Women, and Beloved Sisters: Heroines in Folktales from Around the World.)

(3) For the first time, I watched the 1973 film The Wicker Man, about a devout Christian police officer who is sent to investigate the disappearance of a little girl on a remote Scottish island. But the locals are enigmatic and resistant, and the Laird is played by Christopher Lee, which can’t be good for Our Hero. The isle’s population turns out to be completely pagan, and everything comes to a head on May Day… 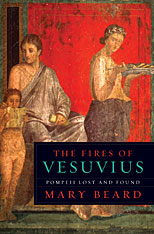 (4) I am currently reading an absolutely fascinating book, The Fires of Vesuvius, by Mary Beard, which came out a couple years ago. It’s a terrific account of life in and the destruction of Pompeii, which engages the archeological and historical controversies surrounding the excavation and the city. Life in Ancient Rome is one of my favorite topics, as it’s both familiar and remote, and I may be reading this book for research purposes, but it’s so easy to get immersed in the daily lives of the ancient Pompeiians, and even easier to be brought up short by the discovery of two bodies, a little girl clutching her mother as the world ended around them.

(5) I saw a marvelous pre-code movie called Night Nurse, starring the always impressive Barbara Stanwyck. As it was made in 1931, before the Hayes Code, which stipulated that people who do bad things have to come to bad ends, and that sexual women were bad bad bad, was enforced, the first half of the movie consists of Stanwyck having conversations with her roommate, Joan Blondell, while they both strip down to their underwear, and the second half consists of Stanwyck trying to foil the machinations of an evil chauffeur, played by Clark Gable, who is intent on killing the two young children in her care so he can have access to their inheritance. The best part is that Stanwyck enlists the aid of her boyfriend, a bootlegger played by Ben Lyon, to get rid of the chauffeur, and I'm pretty sure the bootlegger is coded as Jewish, because his name is Mortie, and at one point, when dispatched to get milk, he breaks into a kosher grocery. Loved every minute of this.


(6) But the best text I’ve read this year has yet to be published. Genevieve Valentine has let me read the manuscript of a novel she’s written based on the Twelve Dancing Princesses fairy tale. Valentine’s version takes place in the speakeasies of 1920s New York City, where twelve daughters of blue blood old money, kept sequestered by their tyrannical father, secretly cut loose and dance their shoes to pieces every night. The history of NYC is another pet interest of mine, and fairy tales are my professional specialty, so what is there for me not to love? And that’s before we get into Valentine’s gorgeous writing.

I’d like to leave you with the very best thing I’ve seen all year. Speaking as an academic, nothing could possibly top this:

Once upon a time, I was the young woman in this video. Now I am the gray-haired professor.

Veronica Schanoes is a writer and assistant professor in the department of English at Queens College - CUNY. Her work has appeared in Lady Churchill's Rosebud Wristlet, Strange Horizons, Interfictions, and Year's Best Fantasy and Horror 21. She lives in New York City and does not like cats.