Strange Horizons has just posted Niall Harrison's annual count of review publications in the sf/f field. This year's count looks at race as well as gender, which I'm glad to see. I'm not glad to see, however, that the statistics for 2013 reviews of work by women and women reviewers has remained pretty much flat in comparison with those for 2012. By this point, the gender disparity is becoming hard to explain without reference to internalized sexism.

Email ThisBlogThis!Share to TwitterShare to FacebookShare to Pinterest
Labels: gender and reviewing, race and reviewing

I'm pleased to announce Aqueduct Press's publication of Lonely Stardust: Two Plays, a Speech, and Eight Essays by Andrea Hairston. Feminist sf readers primarily know her as the author of Mindscape (winner of the Carl Brandon Society's Parallax Award and shortlisted for the James Tiptree and Philip K. Dick Awards) and Redwood and Wildfire (winner of the James Tiptree Award and Carl Brandon Society's Kindred Award). Those who've attended WisCon, IFCA, and Readercon will also know she writes (and performs) fabulous essays, eight of which appear in this collection. The speech mentioned in the title is her GoH speech for WisCon. Andrea has long been a writer, director, and performer of plays as well, and Artistic Director of Chrysalis Theatre and Louise Wolff Kahn 1931 Professor of Theatre and Afro-American Studies at Smith College. Not surprisingly, given Andrea's interests and cast of mind, her plays are science fictional, and two of these, "Hummingbird Flying Backward" and "Lonely Stardust," are included in the collection.

How to sum up the collection as a whole? I can only try:  Lonely Stardust: Two Plays, a Speech, and Eight Essays brings us the texts of nine marvelous works of scholarly performance as well as two works of drama in which the fantastic shows us the way through despair. In several of the pieces here, Andrea's sharp, visionary eye examines Hollywood blockbusters and finds a great deal to think about, even as she impatiently slices through hackneyed received views that do popular culture and its fans no favors. Taken together, these essays and plays broadcast a message of hope and intelligence that defiantly insists that our ability and desire to tell stories defines our humanity and is one of our most valuable resources.

This collection, for me personally, is an exceedingly valuable resource. Andrea's vision, though infused with hope and love, never ever pulls its punches. I can't tell you how happy I am to be publishing it.

Aqueduct will be selling Lonely Stardust through our website at a reduced price until June 1, 2014, its official date of release. The e-book edition is also available there now.
Posted by Timmi Duchamp at 12:04 PM No comments: 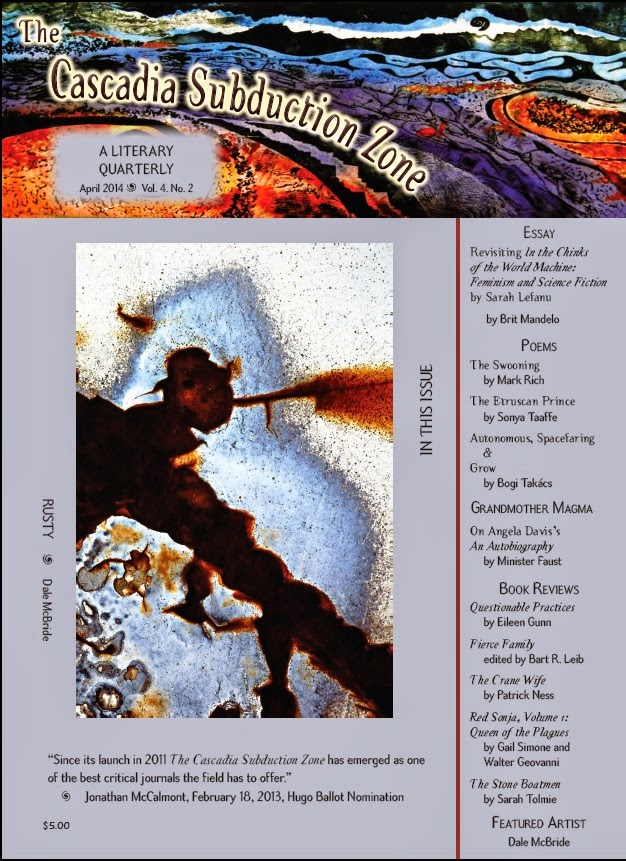 Essay
Revisiting In the Chinks of the World Machine:
Feminism and Science Fiction by Sarah Lefanu
by Brit Mandelo
Poems
The Swooning
by Mark Rich

The Crane Wife, by Patrick Ness
reviewed by Gord Sellar


You can purchase the issue at http://www.thecsz.com/subscribe.html for $3 or a year's subscription for $10. And like all issues of the CSZ, it will be available for free download six months from the date of publication.

I'm pleased to announce the release of the 39th volume in Aqueduct's Conversation Pieces series, Myths, Metaphors, and Science Fiction: Ancient Roots of the Literature of the Future, by Nebula-award winning Sheila Finch.It's available now through Aqueduct's website in both print and e-book editions, and will be soon be available in all the usual places.  Here's a bit from the introduction:

"The great myths seek to explain us to ourselves--our exploits, passions, triumphs, and failures. They can be found all over the world, often displaying remarkable similarity.

"Nobody--scientist, seer or science fiction writer-- can reliably predict what will happen two days from now, let alone two millennia. Science fiction is really about us as humans--living, loving, fighting, raising families-- but set in another place and time so that the message may get through without being censored by the self-protective function of our egos."


“This welcome discussion of the connections between future fiction and stories about human inception emphasizes how mythic roots contribute to the emotional power of narrative. Finch investigates the inexplicable awe and wonder that emanates from close encounters between myth and science fiction. This juxtaposition emphatically indicates that science fiction is the predominant mythic metaphor of our time.” –Marleen S. Barr, author of Feminist Fabulation and Oy! Pioneer

James Gunn, author of The Listeners and Transcendental, writes: “The gifted writer Bob Sheckley once told me that when he was hard up for a story idea he opened his book of fairy tales. Now the gifted and insightful Sheila Finch tells us why.”
Posted by Timmi Duchamp at 6:00 PM No comments: