The day after WisCon 40 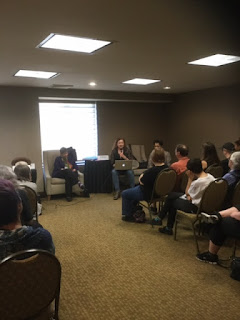 Wow. I slept in this morning, then packed, checked out of my room, & left my luggage in the bellman's closet & ambled over to Michelangelo's for coffee & a bagel. I'm there now, & as happy & relaxed as could be. Why? Because I had a wonderful WisCon, one of the best ever. As most people who've been to WisCon know, one of the most common small-talk questions at the con is, "How's your WisCon?" Unless you have a serious problem that needs articulating, the de rigueur answer is a positive one. My answer in past years has ranged between whole- and half-hearted. No half about it this year, though. 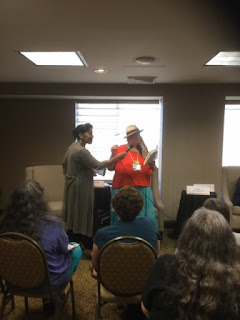 I read from my forthcoming novel, "The Waterdancer's World," but otherwise did not participate in programming. This was the first year of all the WisCons I've attended, in which I didn't appear on a panel. I wasn't sure how I would feel about it, but it feels, in retrospect, like a brilliant decision to have made. I'm going to listen, reflect, & ask questions this year, I told myself. I in fact still did a lot of talking this year (especially on Friday, for some reason, as a few people who might be reading this might readily attest to), but looking back over the weekend, I think I did spend more time than I usually do listening with my full attention to what other people had to say. I half-think this had to do with my decision not to sit on any panels (thus unconsciously shifting my orientation), & also suspect it might have to do with the fact that last year I was depressed, which meant that my energy level was way down & my interest in the rest of the world sadly reduced. This year I was hungry for news of what others had been thinking & doing. I was also pretty lucky in my choice of programming to attend. (I made one wrong choice, which is actually not so bad.) & I sadly had to miss the panel on Octavia Butler's work (which I've heard was dynamite), because it coincided with one of the three Aqueduct Press authors' readings. I missed another panel I wanted to attend because I was in the middle of a conversation when it started and had gotten caught up in another when it was about two-thirds through. It can be a tough call, choosing between conversation & a panel one wants to attend, but the fact is, for me, those conversations are part of what makes WisCon so vital for me.  They're the reason I always go home from WisCon changed. At 65, I've never been more aware of how important it is to me to feel myself still learning & changing. I may not have the energy & stamina I once had, but my capacity for engagement is, I hope, as strong as it's ever been.

Speaking of those Aqueduct author readings, I have photos for each, which I'll be posting once I'm home (& rested). The photos above are from readings. The other one, below is of our tables in the Dealers Room that I took as we were finishing setting them up. This was the first year we didn't bring at least one copy of all our books. We have too many titles now to bring them all, even with three tables. Can you believe that? But then our next volume in the Conversation Pieces series, Sleeping Under the Tree of Life by Sheree Renee Thomas, will be the fiftieth. 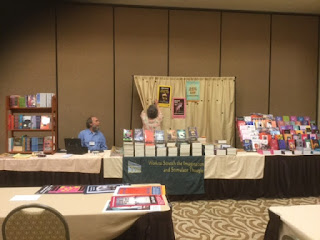 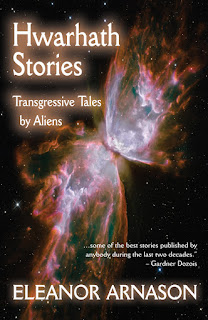 I'm please to announce the release of Eleanor Arnason's collection, Hwarhath Stories: Transgressive Tales by Aliens, which Aqueduct Press has published in both trade paperback and electronic editions. (You can purchase it now from Aqueduct Press.) Hwarhath Stories: Transgressive Tales by Aliens collects a dozen Hwarhath tales with commentary by their translator. As the translator notes, "Humanity has encountered only one other species able to travel among the stars. This species, who call themselves the hwarhath, or 'people,' are also the only intelligent species so far encountered. Of course, we interest and puzzle and disturb each other... The stories in this collection were written after the hwarhath learned enough about humanity to realize how similar (and different) we are. Our existence has called into question many ideas about life and morality that most hwarhath would have called certain a century ago..."

"One of the strongest collections of science fiction stories you’re ever likely to find. It’s hard to think of anybody other than Ursula K. Le Guin who was written better anthropological science fiction than Eleanor Arnason, and this very strong collection gather some of the best stories published by anybody during the last two decades."
—Gardner Dozois, author of When Great Days Come, editor of Year's Best Science Fiction series

"These are magnificent stories, wise, witty, science-fictionally fascinating, moving. This may well end up being the story collection of the year."   —Locus, Rich Horton,  April 2016

"Arnason's aliens are almost uniformly bisexual, and forbidden from engaging in heterosexual love beyond what’s needed for procreation. This behavior allows Arnason to adapt timeless folkloric tropes to her own modern, progressive, and wholly original reality, which comes alive in her precise, classically beautiful prose."
—Publishers Weekly, February 29, 2016

"This is anthropological science fiction at its best, with only Ursula K. Le Guin rivaling Arnason in cultural insight and in the sophistication, complexity, and evocativeness of her worldbuilding. The hwarhath serve as a distorted mirror in which we can clearly see our own follies, foibles, peculiarities, and the inequalities of our society; the hwarhath, meanwhile, see humans as a distorted mirror in which they can see the peculiarities and inequalities of their own society. Arnason does her best work here at novella length, and I consider "The Potter of Bones" and "Dapple" to be among the very best novellas of their respective years, and as having an honorable place amongst the best SF novellas ever written. "The Hound of Merlin", "The Actors", "The Lovers", "The Garden", and "Holmes Sherlock" are also very strong; in fact, there's really nothing here that isn't worth reading. Coming as it does from a small press, you may not see Hwarhath Stories: Transgressive Tales by Aliens included on many lists of the best collections of 2016 as the year comes to an end, but believe me, it's one of them. It may even turn out to be the best collection of the year. "
—Locus, Gardner Dozois,  May 2016

"Since the publication of Ring of Swords in 1993, Eleanor Arnason has been producing stories not so much about her furry, logical, matriarchal, alien hwarhath as by them. Hwarhath Stories: Transgressive Tales by Aliens gathers a dozen such published between 1993 and 2012 and adds an introduction and comments (about which more below). As the crucial preposition in the subtitle suggests, these are tales the hwarhath tell themselves as they begin to question some of their previously unquestioned assumptions about their nature and culture—questions generated by encounters with the puzzling, disturbing, dangerous, gender-strange creatures called humans."    —Locus, Russel Letson,  May 2016

"The alien species Hwarhath is an intelligent population whose inhabitants share many similarities to, and differences from, humans. This collection by the James Tiptree Jr. Award–winning author Arnason (A Woman of the Iron People) details Hwarhath society from the perspective of a cultural anthropologist and translator. The first story, "Historical Romances," details the differences in Hwarhath literature and popular fiction, showcasing the latter in "The Actors," "Dapple," and "The Potter of Bones." Sexuality, its fluidity, and its defined gender roles in this extraterrestrial community are highlighted in the myth-based tale, "The Gauze Banner." Delivered in a clear voice with scholarly touches, Arnason's book brings a fantastic species to life. Verdict These stories mostly date back to the 1990s, but the intelligent tone and anthropological view is as impressive nearly two decades years later. Readers who favor robust cultural development in related speculative works will find this collection a joy to ­absorb."  —Library Journal, April 2016
Posted by Timmi Duchamp at 2:39 PM No comments:

Strange Horizons' sixth annual "SF Count" - an in-depth exploration of gender and racial representation in SF reviewing - is published today, and finds that although there is some evidence of improvement in some of the 18 magazines and journals surveyed, overall 9 out of 10 books reviewed are by white writers, and 6 out of 10 books reviewed are written by men. A similar disparity is seen in the demographics of reviewers.

This year, Strange Horizons worked with data designer E. G. Cosh to develop visualisations of the SF Count findings. The full results are available on the Strange Horizons website and as an embeddable Tableau dataset (links below). Gifs describing the methodology and the topline results are attached with this press release.

Some notable points from the survey:

* The most active venues in the field were Locus (324 reviews), SFX (165 reviews), and Romantic Times (141 reviews); the least active were The Los Angeles Review of Books (35 reviews), Lightspeed (28 reviews), and The Cascadia Subduction Zone (23 reviews).

* The venues with the largest reviewing staffs were Strange Horizons (80 reviewers), Science Fiction Studies (38 reviewers), and SFX (30 reviewers); at the other end of the scale, Asimov's and Lightspeed had 3 reviewers each, Risingshadow.net has 2, and Analog has 1.

This year's SF Count will mean different things to different people. My own personal takeaway is that although The Cascadia Subduction Zone's circulation figures remain disappointing, our work is not yet done.
Posted by Timmi Duchamp at 1:13 PM 1 comment: 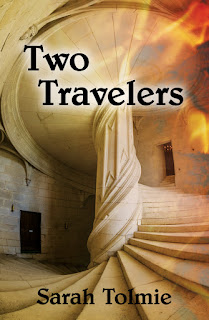 I'm pleased to announce the publication of Two Travelers, a pair of portal fictions by Sarah Tolmie, in both print and e-book editions. In "Dancer on the Stairs," a woman wakes up on a stone staircase in a baroque palace, not speaking the language of the place and lacking the chemical signature that allows people to identify each other within a complex social hierarchy. Unable to communicate in words, she resorts to dance. In "The Burning Furrow," a man who runs a diner in present-day America is also a freedom-fighter in the northern, courtly realm of Dinesen. His people are abused foreigners at home, the servants of strangers, bound not by their overlords, but by their world itself, through a ritual known as the burning of the furrows. Only he and his family are free—for a time. Now that time is ending.

"Two Travelers is a magical evocation of the outsider experience, a book that transports its characters to strange new worlds, where they must make their way despite language barriers and culture shock. Sarah Tolmie's lyrical prose guides readers through vividly imagined cultures where the fate of a kingdom hangs on the outcome of a dance, or where, as your family's size changes, so too must your name."
—A.M. Dellamonia, author of A Daughter of No Nation and The Nature of a Pirate
"Sarah Tolmie is one of the best new writers I've discovered in a long time. Her writing is a joy to read."
—Amy Thomson, author of Storyteller and The Color of Distance

Author and professor Tolmie (The Stone Boatmen) delivers an exquisite duo of short stories in this slim volume.... Rich with detail, both stories are imbued with baroque sensibilities, a refreshing deviation from the typical medieval setting. Rather than relying on pure exposition, Tolmie uses the characters' interactions and personalities to bring color to the unique magic of each setting. Tolmie's investigations of identity, place, and personal meaning are a delight to read and a great contribution to the genre.
—Publishers Weekly, April 2016