No message in this bottle 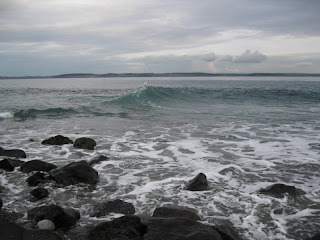 Today the air's mild; the sea is calm and, down on the beach, silky. The clouds are starting to thin, revealing patches of blue.And every now and then the sun breaks through, always, it seems in about the same place in the sky. Before descending the hill to the beach, I looked out over the water and saw that a good many waterfowl were to be seen in the southern part of the Inlet-- and discovered, when I reached for my binoculars to take a closer look, that I'd forgotten to bring them. (When I get this into my work, I get absent-minded. So no big surprise there.) Since I knew I'd feel frustrated walking the south beach without the binoculars, I walked north, instead, to Point Wilson, and did not even try to guess the species of the few birds I happened to see in that part of the Inlet (grebes, probably, since they were making a lot of long dives). The beach was clean, the tide on its way out, and the only debris littering the sand and stones (other than bits of seaweed and clam shells) was a vodka bottle, still with its plastic cap on (no letter inside, sorry to say, only a small bit of clear fluid). Up at the Point, although the wind didn't pick up and the sea was still fairly smooth, repeatedly a swell would rise into a good-sized wave, heaving higher and higher until finally it began to curl (the kind that could be surfed, but for the fact that it broke, each time, on the rocks, which would make any attempt at surfing suicidal). When finally it broke on the rocks, the dramatic collapse created thunder (as well as a lot of foam, of course). It was a mesmerizing sight, especially because the waves were breaking at a something like a ninety degree angle to the beach. So I found a comfortable log and sat and watched until I got to cold to sit quietly. But then the Point is a weird place, as I discovered last year. The beach curves dramatically, it's at the mouth of Admiralty Inlet, and its water is flowing into or out of the Strait of Juan de Fuca (depending on whether the tides going out or in). Lovely. 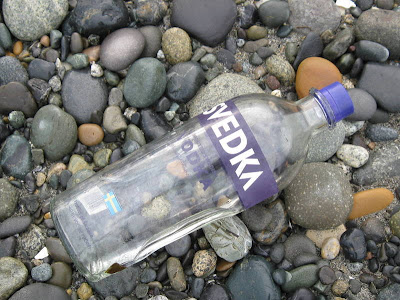 Posted by Timmi Duchamp at 4:21 PM