Memories of Tomorrow by Mayi Pelot 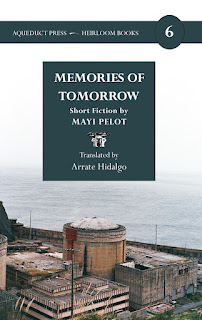 I'm pleased to announce the publication of Memories of Tomorrow by Mayi Pelot, translated from the Basque by Arrate Hidalgo,* as a volume in Aqueduct Press's Heirloom Books series. Aqueduct is releasing it in both trade paperback and e-book editions. It's available now at www.aqueductpress.com.

Memories of Tomorrow collects a set of vibrant and enigmatic visions that emanated from one of the most creative minds of contemporary Basque literature. Often unnoticed by the established canon, Mayi Pelot has been uncovered and championed in recent years as one of the first genre authors in the language. Her publications, despite their brief span—from 1982 to 1992—undeniably laid the groundwork for future generations of Basque science fiction writers.

This collection, the first book published by Mayi Pelot, includes six stories that take place in the same galaxy but at different times. Touching on subgenres such as social speculative fiction, the techno-thriller, and space opera, Memories of Tomorrow is, in essence, a poignant political commentary on the oppressive systems that rule our world and their practices of othering, neocolonialism, gentrification, and massive exploitation of natural resources. Pelot often focuses her lens on those questioning and resisting the actions of the powerful and points to the relationship with nature and one another as a healthy, sustainable alternative to our current world structure.

The five sci-fi shorts and one novella in this impressive collection from Pelot (1947–2016) explore the aftermath of a third world war. The flash fiction opener, “Miren,” showcases Pelot’s ability to make a visceral emotional impact in only two pages. “Row, row,” about a girl named Leyre attending a lesson on the futuristic Anti-Pollution Wall, builds on that first story in a devastating way, exploring the interconnectivity of individual trauma. The emotionally authentic “Feedback” follows a Muslim man living in 2039. The standout is novella “The Exchange,” in which an unfaithful man named Wotan pursues the mysterious being Erda, who lives beneath the planet Daleth. The tale is lush and immersive in its illustrative descriptions of other worlds and other beings, and contains the most beautiful prose of the entire collection. Hidalgo’s introduction, which provides fascinating context for Basque science fiction, lauds Pelot as an “innovator,” and these six works prove her worthy of this praise. Readers will be delighted to dive in to Pelot’s oeuvre.--Publishers Weekly

*The translation was made possible by a grant from the Etxepare Basque Institute.

Posted by Timmi Duchamp at 3:07 PM No comments: