Reading and other pleasures of 2010
Lesley A Hall

Among the major pleasures of this year was getting to see several Louise Nevelson sculptures in situ while I was in the USA in November. In a brief excursion to Washington I managed to take in the spectacular Sky Cathedral in the Smithsonian Museum of American Art, although this image fails to convey the impact of coming across it, as well as a couple of smaller pieces there, and Black Wall and Silent Music IX in the Hirshhorn Museum and Sculpture Garden. (Also a breathtaking series of moments in the Museum of American Art, David Hockney's kinetic installation Snails Space with Vari-Lites, "Painting as Performance".)In Philadelphia I spent a considerable amount of time just wandering round and round and gazing at the extraordinary Bicentennial Dawn, which is inside the court building and requires navigating their security systems to see close up, rather than through smoked glass. I was also surprised, in a good way, to find Atmosphere and Environment X outside the Library at Princeton, where I had been doing a little research.

This involved reading some early correspondence of Rebecca West, one of my great heroines, which was a pleasure in itself. Reading pleasures this year included another collection of rare and unpublished work by her put out by fellow enthusiasts - The Essential Rebecca West: Uncollected Prose (Pearhouse Press).

An exhibition I was glad to catch when it came to the Sir John Soane Museum in London was Mrs Delany and Her Circle, on the C18th bluestocking and craftswoman, whose still stunning embroideries and flower collages succeeded in being accurate botanically as well as aesthetically pleasing, reflecting her own interest in and engagement with contemporary science as well as her consummate skills with needle and scissors. There is a magnificent and lavishly illustrated book resulting from this exhibition, under the same title, my only criticism of which is that it was rather too large to be comfortably read without a lectern! It was heartening to learn that it was her female descendants who made the efforts which mean that so much of her work has been preserved for posterity. 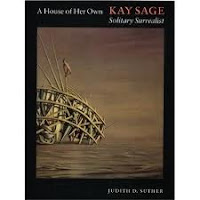 I didn't manage to get to the Angels of Anarchy exhibition on women in surrealism, but did enjoy the book of the exhibition, which also led me to delve further into the work of Kay Sage, an artist new to me whose works often strike a somewhat science-fictional note, and the excellent biography by Judith D Suther, A House of Her Own: Kay Sage, Solitary Surrealist, which makes particularly good use of several decades of feminist art criticism in her analysis of Sage's career and the reception of her work.

Also in the realm of feminist history and foremothers, there was a production of three short plays from the suffrage movement at the Union Theatre in Southwark, tucked under a railway arch. They remained surprisingly amusing and enjoyable, not just historical curiosities, even if they would not count as neglected theatrical gems.

On a rather different form of resistance to hegemonic ideas of gender, Alison Oram's Her Husband was a Woman!: Women's gender-crossing and twentieth century British popular culture (2007) is a wonderfully rich historical study of this overlooked topic, taking in numerous cases of "female husbands" which came to the attention of the press, as well as male impersonators in the music hall (perhaps forgotten predecessors of "drag kings"?) and the relatively slow changes in ideas about women who loved women. I read parts of this in draft but this was the first time I'd read the finished book through cover to cover. It's really excellent.

In the area of fiction, I was delighted to discover Ankaret Wells's Books of Requite 1 & 2, The Maker's Mask and The Hawkwood War, which fulfilled a craving I had hardly realised I had for intelligent swashbuckling space-opera/planetary romance with female characters who were strong in unusual and idiosyncratic ways, all sorts of complexities of gender and relationships, and political and familial intrigue. This seems to be a subgenre we have seen very little of of recent years.

Revisiting old favourites, I devoured, in internal chronological order (with one exception which I had trouble acquiring), Jane Duncan's marvellous "My Friend" books. These are much less cozy than they might initially appear - the series title, and the original slightly twee cover designs, tend to occlude the extent to which Duncan's narratives incorporated problematic and painful matters (disappearing ways of life, the impact of social change, illegitimacy, suicide, alcoholism, dysfunctional communities and families, religious mania, racial prejudice) - and they are quite compellingly readable, a triumph of authorial voice as mesmerising storyteller.

I also reread for the first time in many years the duology by noted character actor Irene Handl, The Sioux and The Gold-tip Pfitzer (her only novels). I am not sure to what extent I would recommend these: I suspect some readers might find them disturbing and even triggery. The Benoir-Bienvilles are a fabulously wealthy aristocratic French dynasty with estates in Louisiana, who have been intermarrying for generations, and suffer from a particularly virulent case of the rich-are-different and sense of themselves as set apart ("The Sioux" is the name they give themselves to express this sense of tribalism), although the novel opens with the exogamous marriage of the once-widowed, once-divorced, still very young, Marguerite to an English banker. However, even their wealth and privilege can do little about a child with the familial affliction "La Perle" - megaloblastic anaemia. The books are a tour de force of tight third-person vignettes from the viewpoints of various family members and servants affected by the situation. Unsentimental yet heartbreaking and horrifying, with shocking moments of comedy. Haunting. 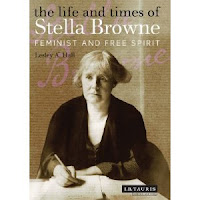 Lesley A. Hall is an archivist and historian resident in London (UK), who has been a feminist since before she discovered the word. She has published several books and numerous articles, chapters, and reviews on gender and sexuality in the UK during the nineteenth and twentieth centuries. Her biography of British feminist socialist sex radical, Stella Browne, is scheduled for release in January 2011. An annual attendee at WisCon since 2005, she also reads and writes speculative fiction. Her reviews have appeared in Strange Horizons and Vector. Aqueduct Press published her biographical and critical study of Naomi Mitchison in 2007.

Posted by Timmi Duchamp at 6:30 AM