The Pleasures of Reading, Viewing, and Listening in 2020, pt. 8: Nisi Shawl 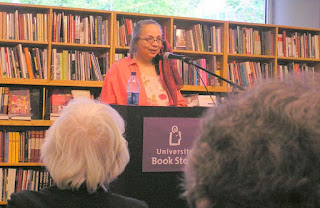 I’ve read less this year than ever. My eyesight continues to deteriorate, and though there are promising experimental results getting mice to grow brand new optic nerves, playing online films and series on the phone is my only current entrée into the land of visual clarity.

One treasure I found there was Get Shorty—not the 1995 film with John Travolta but the three-season series starring Chris O’Dowd. I had to subscribe to a network called Epix to get it, but it was well worth the price of admission, and there are probably other ways to watch it. The plot, which is very loosely based on the Elmore Leonard novel of the same name, concerns a low-level drug cartel hit man who becomes an award-winning Hollywood producer. The humor—for me, at least—derives from the shared and mirrored ruthlessness of criminals and filmmakers. Get Shorty kept me busy for a little over a week. Two of my other notable vicarious forays into the dramatic life of crime, Peaky Blinders and The Sopranos, lasted two and three weeks respectively.

Occasionally, as I come to the end of a series-long binge, I experience the sinking realization that my next plunge into popular media is going to take an even larger chunk of time, and that it may actually change the way I construct reality. That’s how I felt on admitting to myself I was about to start watching all five seasons of Breaking Bad.I delayed onset by redirecting my attention to the five available seasons of the Breaking-Bad-adjacent Better Call Saul. And then I broke down and watched the first series, as I’d always known I would. Better Call Saul is Breaking Bad’s prequel. And its superior. Depth-filled writing and inspired acting abound. Comically greedy lawyer Saul Goodman (as in “it’s all good, man”) appears in this “earlier” show as a loving and idealistic con artist. Dead-eyed heavy Mike Ehrmantraut is a principled ex-cop slipping helplessly into the life of violence he “later” becomes inured to. As a writer I applaud the twists and leaps the show’s directors make this story make. As a lawyer, my friend Victoria Garcia validates the authenticity of its representation of legal practice in the Southwest.

A sixth season and final season is planned, but shooting paused this spring. You know why.

I started bingeing online films and series pretty much solo, though I did set up a Netflix party with Victoria to watch Blow the Man Down, a fun-loving feminist film about murder and prostitution in a small New England fishing village. Now I’ve got plenty of company in my decadence. No longer am I nervously apprehensive that I’ll be accused of wasting time. I’m not in this all on my ownsome, and my only real worry, which I share with hundreds and thousands of others, is that we may run out of old content before anyone makes anything new.

Meanwhile, descending into the mass culture whirlwind of watching West Wing, I confessed to my critique group that I found its fantasy of smart, caring, literate professional politicians more appealing than I could ever have imagined. One member enabled my squee by pointing me to a piece of webhosted West Wing fanfic titled “The Age of Aquarius,” a well-written “shipping” narrative featuring two of the show’s lead characters, Josh Lyman and Donna Moss.

As of this writing, the latest program I’ve started bingeing is Borgen. It’s a sort of Danish West Wing in which the woman leading Denmark’s Moderate Party becomes, through a series of fluke events, her country’s first female Prime Minister. There are English subtitles, which is good; I don’t speak Danish, though I’ve traveled to Copenhagen. There’s much less prudishness than I’m used to, and also much less violence. In a scene depicting a stop on an African country’s backroad to change a tire, for instance, no ambushing guerillas pin the party down with explosives as they would in a USian analog. The tire’s changed, the characters chat about their mission’s prospects, the trek resumes.

So what am I getting out of all this, then, if not the thrill of surviving someone else’s sudden bloody demise?

In his darkly humorous novel Pym, Mat Johnson opines, via the book’s tokenism-wary literature professor Chris Jaynes, that the proper study of Blacks is whiteness. While I wouldn’t go so far as to prescribe to others a way to scratch what could be my personal itch, I feel a slight bit of vindication seeing this advice in print. Someone else may understand my obsession. They may actually get its point.

Which point is this: I love to luxuriate in the diverting weirdness of white people, their endless striving for position in hierarchies of their own devising, the interplay of their clashing powers—often powers derived from unanticipated sources and rising from mutually unintelligible genetic blueprints. All these joys combine to give me the sense that I’m above and beyond whites’ influence. It’s my favorite illusion. It’s my favorite form of entertainment.

Nisi Shawl is the Solstice-Award winning author of  Filter House, which won the James Tiptree Jr. Award and was nominated for the World Fantasy Award, Something More and More, her WisCon GoH collection, and, with Cynthia Ward, the co-author of the celebrated Writing the Other: A Practical Approach, and the editor of The WisCon Chronicles, Vol. 5: Writing and Racial Identity, all of which are published by Aqueduct Press. Aqueduct Press has also published Strange Matings: Science Fiction, Feminism, African American Voices, and Octavia E. Butler, which Nisi co-edited with Rebecca Holden. Tor released her brilliant alternate history/steampunk novel, Everfair, in 2016. She was awarded the World Fantasy Award as the editor of the wildly successful New Suns: Original Speculative Fiction by People of Color, which won several awards, including the 2020 Locus Award  the 2020 World Fantasy Award. She is also the editor of the acclaimed anthology, Stories for Chip: A Tribute to Samuel R. Delany and other anthologies.  She reviews science fiction for the Seattle Times and writes columns for Tor.com and The Seattle Review of Books, is a member of the Clarion West board, teaches writing workshops at Centrum in Port Townsend, WA., and is the reviews editor of The Cascadia Subduction Zone.
Posted by Timmi Duchamp at 6:00 AM