The Pleasures of Reading, Viewing, and Listening in 2020, pt. 26: Nancy Jane Moore 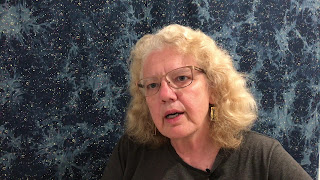 2020: The Year of Books and Crows
by Nancy Jane Moore

Each day I write a senryu, a haiku-like verse intended to capture what is going on in my life that morning. On January 3 of 2020, I wrote this one:

I still plan to hope
that this year improves on last.
But the news so far …

I don’t remember what happened in the first days of January that worried me. It doesn’t really matter. Anyone who has lived through 2020 understands why I wince every day when I open the folder to write the next senryu and read those words.

For me, as for most people, it’s been a year of fear and anger. As I write this, I’m listening to a town hall held by my state senator and have been told once again that even though the vaccine news is good, the best case scenario for a return to something resembling ordinary life – not normal, because normal is gone – is the end of summer 2021.

I had the joy of visiting Melbourne, Victoria, Australia at the end of February (which means, of course, that I flew internationally as the pandemic was starting to spread). Since travel isn’t a possibility right now, I won’t go on and on about it, but I do want to visit that part of the world again.

The last event I went to this year was FOGcon, which was held March 6-8 here in the Bay Area. That’s the last time I ate out and the last time I was able to hang out with people in person. I realized at the con how important it was to spend time with smart people I don’t get to see often. And then, of course, I couldn’t get together with others that way any more.

It is clear that there are some useful aspects of online events, particularly cost and accessibility, but we need to make sure the in-person ones come back. There are important aspect of being human that require contact with others.

Reading has been my salvation this year. I find it easier to immerse myself in the written word than I do in movies and TV and being immersed is the best way I’ve found to forget what’s going on in the world.

Ironically, the first book that I read and loved this year was Sarah Pinsker’s A Song for a New Day, in which a combination of terrorist attacks and a virus leads to people living in a permanent state not far removed from lockdown. It’s a brilliant book and makes the strongest possible argument for why we need to find a solution so that people can, in fact, spend time with others. (And for once, I voted for the book that won the Nebulas. Usually I am more out of step than that.)

There were many other works of fiction that kept me going. I re-read all the Murderbot novellas in preparation for Martha Wells’s Network Effect, and the immersive experience was worth all the time. In fact, I re-read all of them again once I finished. The combination of fast-paced space opera with an ongoing meditation on what it means to be a person and the different ways societies are organized gave me both escape and something to chew on.

In the last couple of weeks I have made my way through Ann Leckie’s Ancillary Justice, Ancillary Sword, and Ancillary Mercy. These books are also compelling stories that interrogate what it is to be a person. Unlike the Murderbot world, there are no societies bordering on the utopian in Leckie’s universe, but given what we’re dealing with in society right now, any effort to come up with some justice and decency is also worth spending time with.

For those of us who love New York City, N.K. Jemisin’s The City We Became is both a truthful and delightful expression of that place. I’m looking forward to the sequel.

I found myself caught up in Arkady Martine’s A Memory Called Empire, so much so that I am impatient for the sequel. Her incorporation of cultures rarely seen in science fiction to create very different ways of looking at the future challenged most of my preconceptions about where we might be going.

Theodora Goss’s Athena Club series, which begins with The Strange Case of the Alchemist’s Daughter, manages to incorporate a great deal of 19th century fiction, from Mary Shelley to Robert Lewis Stevenson and, of course, Conan Doyle. I am drawn more and more to retellings of the stories we all grew up with that look at the “heroes” in very different ways.

Gillian Polack’s The Year of the Fruitcake, which won Australia’s Ditmar Award, is a great example of a book that can be deeply serious and deeply funny at the same time. An alien from a world where gender change is common finds herself (itself?) in the body of a menopausal woman and spends time with a group of women who meet over chocolate. The alien is on a mission, one that might be devastating to Earth, but is having difficulty remembering things, perhaps because of conditioning, perhaps because she’s trapped in the menopausal body.


Then there’s Maria Dahvana Headley’s new translation of Beowulf, which makes clear the toxic masculinity at the heart of so many of our epic warrior tales. Her decision to start it with “Bro” and to have so many characters talk about their powerful daddies made the roots of tough guy culture so obvious. I note that I sent it to my nephew, who, though he is a Latin scholar and not one of Anglo-Saxon, said he thought he might like it even better than he did Emily Wilson’s translation of the Odyssey.

Re-reading was another major facet of my 2020. I re-read Nicola Griffith’s Hild at about the same time as I read Beowulf, and found it also illuminated a culture that we have been taught is the basis for our civilization but which turns out to be much more about warlords and their hired fighters killing each other while the women and some of the men build working societies. I don’t think I looked at Hild that way on first read, but there was something about reading about the 6th and 7th century concept of kings at a time when we have a “president” who would like to rule as one of those warlords made the relationship crystal clear. He would have been one of the weak ones who was soon overthrown or made a puppet, of course, but his desire for that kind of power is obvious.

Other books that I re-read (more than once) included C.J. Cherryh’s Chanur series, possibly my favorite space opera ever and a lovely look at humans from the alien point of view, and Madeleine Robins’s Sarah Tolerance series, which starts with Point of Honour and features a fallen woman with a sword working as an agent of inquiry in Regency England.

And just recently I pulled up Karen Joy Fowler’s We Are All Completely Beside Ourselves. Reading it knowing the surprise that comes about a third of the way into the story made me look more carefully at the characters and how they acted and grew. The deadpan humor and the clear-eyed pain in the story wove together beautifully and left me in deep contemplation about our times.

I always read a lot of nonfiction. One of the most important books for me this year was Stephanie Kelton’s The Deficit Myth, which explains modern monetary theory in terms that non-economists can follow. A country like the United States that has a sovereign currency does, in fact, coin money, and therefore is not subject to household budgeting. While such governments must pay some attention to inflation, the truth is that we can afford to spend a great deal of money to provide the things that our society needs and do not need to worry about deficits or the “national debt.”

Early in the pandemic, Kelton tweeted that the government should send every citizen a debit card and masks monthly. If we were following her approach right now, the economic suffering that is accompanying the pandemic would not be a problem.

Rutger Bregman’s Humankind is another work that upends common assumptions, these about human nature. He starts by pointing out that a real life situation in which a group of boys found themselves on an uninhabited island without supervision did not, in fact, end in the horrors of Lord of the Flies, but rather in the development of a cooperative and mutually supportive way of life. This book also provides evidence debunking the Stanford prison experiment and other so-called research that has been touted as evidence that humans are bad actors at heart.

I’m currently making my way – slowly – through Thomas Piketty’s Capital and Ideology and the late David Graeber’s Debt: The First 5,000 Years. They are both long and complex books and it will probably take me until next year at this time to be able to discuss them thoroughly, but I have certainly read enough to recommend both.

Next up in my fiction TBR pile: Andrea Hairston’s Master of Poisons. But you’ll have to wait until next year to find out what I think.

A final note that has nothing to do with books: my partner and I have managed to become friends with our neighborhood crows this year. For some time, my partner has carried around a small bag with some cat kibble in it so he could make connections with the crows, but since we often travel and he doesn’t walk around the neighborhood as much as I do, he was never successful.

In the pandemic, most of our “travel” is around the block. Not only do we meet the same crows in the same places when we’re out, but they have discovered where we live. They come by and demand treats on a regular basis. Not too long ago, I threw kibble out the window for ten crows.

We may not have met any aliens, but at least we have started to get to know some representatives of another species.

Nancy Jane Moore is the author of the forthcoming fantasy novel For the Good of the Realm as well as the science fiction novel The Weave. She holds a fourth degree black belt in Aikido and teaches and writes about empowerment self defense. Her blog posts can be found regularly at https://treehousewriters.com/. A native Texan who spent many years in Washington, D.C., she now lives in Oakland, California, with her sweetheart, two cats, and an ever-growing murder of crows.