The Pleasures of Reading, Viewing, and Listening in 2020, pt. 6:Tansy Rayner Roberts 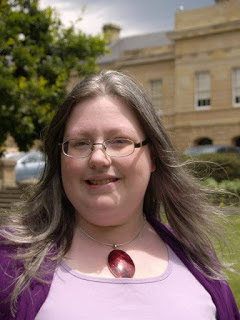 Theatre in Lockdown: my year of empty   velvet seats
by Tansy Rayner Roberts

2020 was a year in which entertainment for many took on a whole new level of necessity (as opposed to luxury)… while some forms of entertainment all but disappeared out from under us.

We’re a theatre household, with my kids very active in local community performances, so our first sacrifices to the Covid Year of No were plays: my youngest was a week away from dress rehearsals when a play she was in was cancelled, and our local Playhouse theatre closed the very week I was going to take my mother to a show to celebrate her 77th birthday.

My mother declared she would stay 76 until the theatres opened again, and fair enough.

A month before everything closed in Australia (theatres AND borders), I was lucky enough to travel to Sydney in February for a work trip, and enjoy a live performance of Six at the Opera House. It was a gorgeous experience, made all the more poignant because for a long time it was the LAST show I got to see live. (Here in Tasmania, with zero Covid cases for some time, a few theatre productions have been allowed again over the last few months, with social distancing plans in place for performers and audiences alike. Most larger shows have postponed or been cancelled because their business model can’t support half-audiences, but a few have slipped through the wire using table seating, or blocking out seats .)

One of the small joys I took from the lockdown months was the wider distribution than ever before of free recorded theatre, with a particular nod to the National Theatre who released a whole season of past productions, switching out plays every week. I didn’t watch them all, but I greatly enjoyed finally getting a chance to see One Man, Two Guvnors, and wonderful versions of Twelfth Night and A Midsummer Night’s Dream.

Living where I am, I’d never have had the opportunity to see those particular productions with those casts, so this was very exciting!

Our family also embarked on a marathon rewatch of all the musicals released by Starkid Productions and Tin Can Bros, two overlapping companies who use a combination of crowdfunding and YouTube release to make their shows far more accessible than just to local audiences. (I can particularly recommend Starship, Firebringer, The Guy Who Didn’t Like Musicals, Solve It Squad and Spies Are Forever, all available for free viewing.)

Over the Halloween month, the Starkid team embarked upon an epic subscription-only series of live events, staging Twilight Zone-style horror play readings over Zoom. In a world of streaming it was exciting to all sit down as a family for “appointment TV,” catching most of these as live broadcasts. They had a little more meat to them than the wave of  "celebrity reunion Zoom call" videos that became a whole new genre in 2020, many of which we have also enjoyed. (The Community one was the best one)

It’s been fascinating to watch what TV has actually still managed to be produced this year, under lockdown conditions. Here in Australia, another of our family favorites, the political comedy show Mad As Hell managed a whole season without its usual live studio audience, and with socially distanced sketches still performed on the stage. We’ve just got used to these things now — no one blinks to see interviewees spaced further apart than usual, comedy without extras in the background, etc.

The crowning glory for me of TV-produced-in-2020 is the comedy series Staged, featuring David Tennant, Michael Sheen, Georgia Tennant and Anna Lundberg playing themselves in a show about two actors deprived of a West End performance, and their long-suffering partners. We watch over “Zoom” as Tennant and Sheen gradually become more and more unhinged in lockdown under the everyday pressures of home-schooling, day-drinking, grocery-shopping for neighbors, etc, in what we can only hope are extreme caricatures of their real personalities. Director Simon Evans and his sister Lucy Eaton also play themselves, ordinary people dealing with extreme stress and the competing egos of the spiralling actors… and there are some wonderful cameos, including the final showdown with the epic Dame Judi Dench as she gives David and Michael the most important advice of their careers.

For those still waiting to return to the theatres, it’s a meaningful reminder that however much the fans of theatre might be missing it dreadfully, the actors and directors have it worse.

If the performing arts of 2020 could be summed up in a single image, it’s perhaps the string quartet who played to a Barcelona theatre in which the velvet seats had been filled by plants from the local nursery, so they wouldn’t feel deprived of an audience.

Tansy Rayner Roberts is an author and podcaster, based in Australia. Her recent publications include Tea and Sympathetic Magic, The Frost Fair Affair, and Castle Charming. You can subscribe to her newsletter here -- https://tinyurl.com/tansyrr
Posted by Timmi Duchamp at 6:00 AM