The Pleasures of Reading, Viewing, and Listening in 2014, pt. 20: Kristin King


Pleasures of Reading, Viewing, and Listening in 2014
by Kristin King 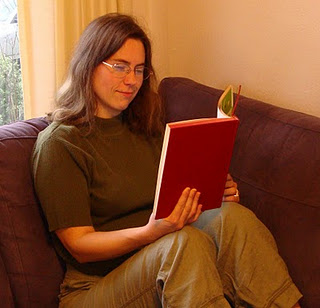 This year went by like a whirlwind, or a hurricane, and it brought some outstanding books, movies, and songs with it. Here is a small sampling.

The Theory of Everything

The film The Theory of Everything chronicles Stephen Hawking’s life and his relationship with his first wife, Jane. I loved it. Drop everything and watch it, but first, be warned: some of Stephen Hawking’s family members were unhappy with the way it depicted private family matters. It comes from one particular point of view, that of his first wife Jane, and the limited constraints of a film make it necessary to omit material and modify facts. So take it with a grain of salt.

I first saw Stephen Hawking in the 1980s, when he gave a world tour. He was already using a wheelchair and speaking with a robotic voice, but even so, his personality and passion shone through it. In fact, any time I hear that same voice, part of me thinks it’s him.

So when somebody said it might be sad, I knew it would also be full of hope, because it was the story of how he came to be the man who filled me with such awe. And it was. As his body deteriorated, he came up with some of his most brilliant theories.

This movie was also a beautiful love story between Hawking and his wife, who were married for thirty years and bore several wonderful children. It didn’t whitewash the troubles, though: it showed how difficult it was to maintain their marriage under the circumstances they faced, and it showed their arguments and infidelity, which ultimately ended in divorce.

I have to give a shout-out to the actor, Edie Redmayne, who played Hawking so well I had to keep reminding myself he was an actor. He played all the changes in Hawking’s body from the time he took his first fall to the time he was nearly immobilized, and everything in between, and I was convinced.

All in all, it was simply amazing.

The novel Maplecroft by Cherie Priest is a fresh take on the Lizzie Borden story. Lizzie Borden was a Victorian woman convicted by nursery-rhyme (but not the courts) of having killed her parents gruesomely with an axe. It’s one of the longest murder investigations in history: people are still finding new evidence and re-evaluating the old. Did she do it, and if so, why?

Well, because they were possessed by demons, of course. Or something like demons -- unfathomable Lovecraftian monsters, or X-Files style aliens, or an infection gone awry. Whatever they are, they’re awfully hard to kill. And somebody has to clean up the mess afterward.

This Lizzie Borden is an expert at both.

My review of this suspenseful and delicious book will appear in the The Cascadia Subduction Zone in January 2015.

I read Nalo Hopkinson’s Midnight Robber about a decade ago and loved it, and now I’m fortunate enough to reread it with a fresh mind. It’s just as dazzling, or more so, mixing Carribean culture and dialect with far-future technology, taking me to a world I’d never expected to see, and from there, through the “half-way tree” to yet another world. I’ve just barely arrived and met an alien inhabitant, so expert and knowledgeable about his world, and then been surprised to find that the humans in the world view him as a “primitive native.” I’m sure more wonderful surprises await as I follow the coming-of-age journey of Tan Tan, a girl destined to become the Robber Queen.

Daniel Orozco’s short story collection Orientation takes the world apart and puts it back together, broken, so we can see it more clearly.  It shows me the human heart in all its sweetness and sorrow and sheer absurdity. My favorite story, also named “Orientation,” is a cathartic and hilarious take on the desk job. You know all the dysfunction you see all day, every day, in every office? The unspoken rules, interpersonal conflicts, and mental illness? Well, the office in this story has a worker who will tell you everything, with sage advice that just might keep you from being let go.

If you ever end up in that office, be careful. Don’t out the serial killer, stay out of the custodian’s closet (you have no business there), and there is no need for you to use the shredder. Never answer the phone. You can use it for emergencies, but only if you ask the supervisor first.  And feel free to ask questions, but if you ask too many, you may be let go.

The Case of the Left-Handed Lady

The Case of the Left-Handed Lady by Nancy Springer is the second book in the Enola Holmes Mysteries series. Enola, Sherlock Holmes’ sister, might be as brilliant as her brother, but like other upper-class girls of the time, she’s also expected to stay out of public sight and then get married. So of course she runs away, sets up her own detective agency, and starts solving the mysterious disappearance of a wealthy woman. And since Sherlock feels the need to “save” her, of course she has to outwit him. This book is fun, fun, fun.

When the movie Frozen first came out, and for months afterward, I couldn’t go to the park without hearing girls sing “Let It Go.” No less than four girls sang it at our school’s spring art festival. And I still can’t stop myself from singing and dancing with my daughter whenever somebody put it on the stereo. The melody is catchy, the dance moves are cathartic, and overall, it speaks to deep, deep issues for girls and women.

“Let It Go” is sung by Elsa, a girl with power she’s supposed to hide. Here’s a taste:

It is perfect for those times we have strong feelings and need to shake away the cultural pressure to suppress them. (As in, all the time.)

This year’s series of Doctor Who was disturbing and scary. It blew my mind. The show featured a new incarnation of the Doctor, played by Peter Capaldi, so unpredictable that he even frightened himself. Watching him play the Doctor was like drinking four shots of single-malt Scotch for the first time in my life and then taking six months to figure out what it felt like.

Usually in Doctor Who, the companions ease us into to the new Doctor. But Clara Oswald was shocked and unbalanced herself. And she had her own journey to make, growing in power and wisdom but also grappling with addiction and compulsive lying. As someone who has always identified with both the Doctor and the companion, I found this hard to watch at first.

Fortunately, I’ve drunk enough single-malt Scotch to realize a good thing when I see it, and I’ve watched enough episodes of Doctor Who enjoy the complex overtones of Peter Capaldi’s performance. One of my favorite episodes was “Kill the Moon,” in which the Doctor strands three women to decide whether or not to blow up the moon for the benefit of humanity. I liked it because it alluded to two previous episodes, “Waters of Mars” and “The Beast Below,” in which the Doctor was faced with similar moral dilemmas and made the wrong choice. Another favorite was “Flatline,” in which Clara took on the Doctor’s role, magic wand of power, and name. She was the Doctor for a day. It was brilliant, and perhaps it took us one step closer to having the Doctor be female, for once.

The Verity! podcast helped me cope with my Doctor Who angst. Every Wednesday, a rotating cast of six women from all over the world dissects and debates and laughs over anything and everything having to do with Doctor Who. It always makes my day.
(http://veritypodcast.wordpress.com/)

Let’s Do the Time Warp Again!

So there’s a comedy duo Hilly Hindi and Holly Hindi, who write, direct, edit, and produce fabulous parodies of hit movies for a young-adult audience. Did you know that? I did not know that. But then I saw the YouTube video “Let’s Do the Time Warp Again.” It’s a parody of Doctor Who, featuring a huge cast of cosplaying singers and dancers, set to the Time Warp song from the Rocky Horror Picture Show.

Kristin King (http://kristinking.wordpress.com)  is a writer, parent, and activist who lives in Seattle. Her work has appeared in Strange Horizons, Calyx, The Pushcart Prize XXII (1998), and other places. Two of her stories appeared in an Aqueduct Press anthology, Missing Links and Secret Histories: A Selection of Wikipedia Entries Lost, Suppressed, or Misplaced in Time. A selection of her short fiction has been collected in Misfits from the Beehive State.
Posted by Timmi Duchamp at 7:00 PM