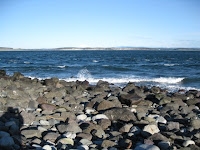 Yesterday I had no time to post, log onto the internet, or even take a walk-- all the available time not taken up with writing went to doing my laundry and going into Port Townsend with Kath to grocery shop and have lunch (which was, actually, almost entirely taken up with working out Aqueduct Press's production schedule for the next six months).

I realized this morning that I'm deep in the zone, now-- at the stage of work in which details of the novel flow in and out of my mind continually, regardless of what I'm doing-- the stage at which chopping vegetables becomes risky. (Especially since I failed to remember to bring a first aid kit.) I've been within the zone for about two weeks now, though for the first week not quite this deep. This morning, in the shower, I forgot what I was doing. All the shower gel had been rinsed off and my skin was getting drier by the second as the hot water poured over it. I've no idea how long I was nonconscious of what I was doing. When I came to, the need to recollect my immediate surroundings came as a sort of irritation. This is, I think, my favorite state of writing to be in, when the work is going on somewhere in my head all the time, whether I'm sitting at my desk or not. But then for me, it's absolutely essential to occupy that zone while writing something as complicated and detail-ridden as a novel (which is why I need to be able to shrug off every other aspect of my life when I'm doing it). So totally not like writing short fiction, or nonfiction... I've no idea, actually, how this works for other writers. I'd be interesting in hearing about it...

It snowed here last night, lightly. The sun has since melted most of it, but this morning when I woke the grass and the cracks in the pavement were still lightly dusted. The air's cold, and the wind's bitter. But the view is the most spectacular yet. I decided to try my walking sticks on the beach today (at least partly because I thought the walk to the beach might have some slippery patches I'd be glad for the help with), and I was glad I did. The wind made walking hard-going. Here's the (brief!) totality of what I wrote in my notebook:

Wind has changed direction, and is now out of the northeast, making everything different! I'm writing with my gloves on, it's so cold. Walking north, I was walking against the wind, and because I was cold, moved as fast as I could, to generate heat. Had to breathe through my mouth because my nose started dripping at a tremendous rate. As I write, I'm at Pt. Wilson, sitting on the log I sit on when my rock's not available. The three guys are out with their cameras again-- each with tripods this 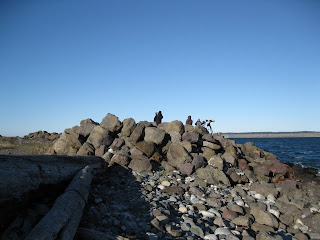 time-- standing just above my place in the rocks (which is why I'm sitting on this log). They aren't shooting anything at the moment, just standing around waiting. For what? My theory is that for some reason they are filming container ships that come through the Strait at a certain time every day. I could ask them, I suppose, but I prefer the mystery. Besides which, when a man wished me "Good afternoon" a few minutes ago, my lips were so stiff that I couldn't form the words "Good afternoon" back-- & had to settle for "Hi." 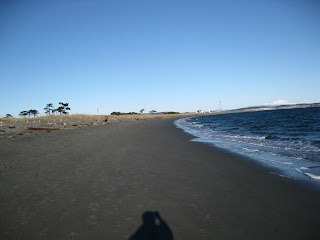 The beach is among the things that's entirely different. You might say it's like new. Scoured clean of seaweed, shells, crab legs, driftwood, jelly fish, as well as all flotsam and jetsam, leaving only sand and rocks. Is this because of the change in the wind, or because there was a negative tide last night? Or both? This afternoon's low tide is considerably lower than the daytime low tides have been. (The tide is just starting to come in, which means my footprints will probably have water in them by the time I start walking back). Driftwood has shifted up the beach, making it almost feel as if the beach has expanded. And another thing: the sand above the tide line is scalloped, from the wind. In fact, when I was walking through the parking lot near the pier, I saw sand skittering across the pavement.

Truly, this is the most spectacular day yet. Even Whisterl's sharp in the distance northwest of Baker. Sea is marked by white caps. Must go-- too cold to sit here without a hat on my head. (And my nose is dripping as steadily as the faucet in the bathroom in the apartment!)

*
Walking back south along the beach, the wind was at my back and I saw large patches of perfectly flat sea, laid out like gently heaving ribbons surrounded by dark blue, 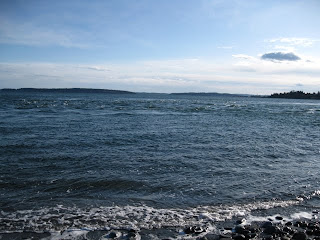 foam-flecked chop. I tried photographing it (see right), but I fear that the camera's vision is not my own. The mushrooms in the meadow I cross daily on my way down to the beach and back are looking pinched and dried. Despite the cold, kids were playing soccer on the Parade Grounds (but no one was standing in the cold, watching them).

Only one more week to go. So must get back to my desk. I so want to be able to finish the novel this time...
Posted by Timmi Duchamp at 5:11 PM

Looks like a long Canon lens (white or gray Nikon long lenses aren't sold in this country), so they may be bird photographers. It's at least a 500mm lens, and may be 600mm. The camera is at the end of it, quite small in comparison to the lens. If they'r doing bird photos, you might learn about what's around there.

Birds! Of course! That makes eminent sense. (You see how my mind works...)