Dozens of Jellyfish, a Seal, and One Thumb, Bleeding 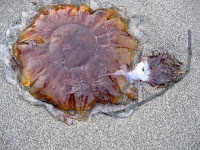 What a day it's been! I talked to a seal just a little while ago. And this morning I had another moment of understanding, but this time one that sent me back into the ms., revising scenes I'd thought I'd finished with, shaping and shading what I'd already written. Which is a good thing, of course. It's an artifact of this novel's finally making sense to me on every level.

But first things first. To start with, I'm typing this without using my left thumb. Remember what I said about not bringing a First Aid kit with me? It wasn't a joke! I've been averaging about one cut a day on the fingers and thumb of my left hand. One of them, on my index finger, made when I was peeling a carrot with a serrated peeler, still hurts (though it's well on the way to healing). Early this afternoon I sliced a bit of skin off my thumb while peeling a grapefruit (with the aid of a very sharp knife) for lunch. I'd already discovered a couple of days ago that staunching the bleeding of a finger with paper toweling while continuing to cook is a clumsy business. But this wound has been a bit more persistent. And I needed it to stop bleeding before I could go out. Finally, when I didn't want to delay taking my beach walk any longer, I folded some paper toweling into a pad which I taped to my thumb with invisible tape. My glove just managed to fit over it. Which was all well and good until I took a tumble in the sand (too busy watching out for the seal I'd seen earlier to be looking out for rocks sticking up out of the sand...Now that I'm home, I can see blood seeping through, under the tape. Which means I'll have to change it soon. (If it were a bit more serious, I could go to the park office and ask for First Aid. But for a minor kitchen cut? Which would have stopped bleeding if I'd had a real bandage to put on it? Argh!)

It was warm enough today for me to sit on a rock at Point Wilson and write in my notebook. Here's what I wrote:

I just saw a seal! I was approaching Point Wilson, at the place where the water currents get very complicated. I noticed about five sea gulls in the shallows, apparently fishing. When I looked more closely, they suddenly took off, and I saw the seal's head sticking out of the water, close in to shore, almost where the sea gulls had been. It reminded me of a dog's head, only without the floppy ears. (I think, actually, that this seal might have been ear-less.) It looked around, as if scoping out the situation. And then about five seconds later, it dove back down under the surface, and I saw its pelt-- it looked light gray to my eye, with splotches on it.

It's really a beautiful day, not in the way previous days have been beautiful, but mild, with no wind to speak of. A cap of high thin cirrus covers the sky (I had the lights on inside all day, because there just wasn't enough light to read by without them), not quite reaching the horizon, leaving a thin band of light running all the way around the horizon, exposing the Cascades in all their glory. Dawn this morning, instead of dark orange, was orange-ish gold-- an odd, rich color I didn't recognize and thus couldn't put a name to, that acquired a bit of pink just before sunrise. 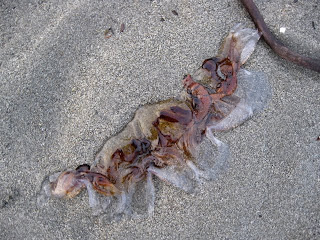 Although it's still a few hours until low tide, because this low tide will be so low, a lot of the beach is exposed. Weirdly, jellyfish have been stranded all over the sand. I stopped counting them when I reached 30. They look like little humps, here and there dotting the sand, of all sizes and shapes, always engulfing something.

I'm so glad I came out for this walk, sniffles, bleeding thumb, and all!

***
Of course I took a few photos of jellyfish-- you know how I am about them!

On the walk back, I encountered the seal again. I kept watching the water, hoping to see it. And because of this (and despite my using my sticks), I went sprawling when I stubbed my foot on a rock. After I clambered to my feet and was brushing the sand off my pants (and noting that my thumb had taken a hit and might very well have started bleeding again), I saw the seal, swimming--- and looking straight at me, as if curious at the racket I'd been making. Because it was staring directly at me, I said "Hello," and then of course realized that it might not actually be looking at me at all, especially since it just swam on, with its head above the water for a little ways (like a dog, I again thought), no longer paying me any attention, until finally it lowered its head and continued on its way, below the surface. 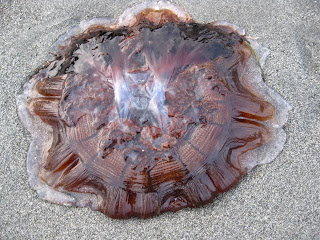 Posted by Timmi Duchamp at 5:28 PM