Claire Light's Slightly Behind and to the Left: Four Stories and Three Drabbles

Well I'm just home this afternoon-- and what should happen but that my desktop computer crashed. But then it got worse! The reinstall didn't work, and the system has gotten into a "loop" (as Tom says). It seems we're going to have to reformat the drive. Sigh. That's life with computers, eh? 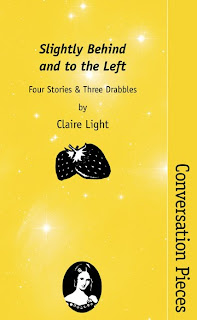 But listen, I arrived home to find a box of Claire Light's bright, shiny new Conversation Pieces volume, Slightly Behind and to the Left: Four Stories and Three Drabbles, sitting on the dining room table. Here's a description of what's in it:

Claire Light's fiction shifts our perspective just enough off-center to render the world we know a strange and unfamiliar place. In this volume, a woman with the most thankless job in space will calculate a new kind of "cold equation" to get her home to port. In a fantastical place where adulthood is the biggest threat to adolescent boys, predators arise from unlikely quarters. In a world with wonky physics and no gravity, a lone human learns the meaning of "reckless endangerment of alien life." And an alien abduction is only prelude to a long phantasmagoric journey. Interspersed with evocative flash fictions, this collection of stories luxuriates in the weird and wonky, half-lit realities and sidelong looks at painful truths.

And here's just a little taste from "Vacation":

The day all the men disappeared she went outside to see if it was true, if they were really all gone. The streets were quieter. You could hear more wind. Sometimes almost half a minute could go by without a car passing. The air smelled cleaner. More people were walking today, looking around. Some faces were in wonder. But in more of them, eyes were sweeping horizontal swaths, whites showing. And in the moments between the gusts of wind, when the wind died down and there were no cars passing, you could hear, for a moment, that the sound of walking was one of swishing and clopping, of cloth between thighs rubbed together, of wooden stacks, and of feet planted more forward than back.

You can purchase this little gem from Aqueduct right now, here for $9. (It will be available other places, like Amazon.com eventually, but not for a couple of weeks.)
Posted by Timmi Duchamp at 5:23 PM