The other day I was reading and thinking I would have handled certain aspects of the story differently, had I written the book. The clincher is that I had written the book. I just received copies of C.M. Kornbluth: The Life and Times of a Science Fiction Visionary from McFarland, and in my compulsive re-reading of the whole, massive thing, I was more powerfully struck than ever by something I had observed before: that you cannot read a thing 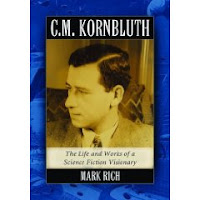 you have written until it is no longer yours. Before that point, you are the writer: the mind keeps fiddling with what the eye takes in. Even when proofing and indexing you are too close-in to see what you created.

When suddenly everyone else has your words before their eyes, at least potentially, is when you want it back. Now you read the published form and only now do you find the confusing statements, the transposed letters, the repetitions, the niggling little flaws.

The corollary to the above is that you have little clue what you say until it comes back to you. Then — to your horror, perhaps — you find out. In this case, fortunately, my sense of horror was well muffled. Except for a couple chapters that are confusing because of the absolute tangle of story and magazine titles, and for a few sections that are arranged chronologically when a thematic arrangement might have been clearer (and ... and ... ) the book is not a bad read — even for the one who should feel ho-hummish, the one who wrote it. I devoured the book with interest, and was overcome yet again by the emotional climax — which for me is not at Kornbluth's death, but at a very strange moment soon afterwards, contained in a few paragraphs Johnny Michel wrote years later.

This year, circumstances led me to catch up on a number of American poets, with the oldest one and the one who perhaps most interests me being John Hall Wheelock. His reputation for employing Christian elements, which he does do in some poems, has I think diminished his stature in the last half-century. I welcomed the chance to revisit Anselm Hollo, whose poems, elusive though they are, I still regard as worthwhile. Philip Whalen, whose poems I also tried to assimilate, is a congenial fellow figure to set alongside Hollo. I even read a short Whalen novel, You Didn't Even Try, which has refreshing immediacy. There were a few other poets I have been reading who are more famous in our day than Hollo or Whalen, whom I found or am finding less convincing, less natural, perhaps less important. On the other hand, I am just diving into poems by Alice Notley, and am regretting not having read her sooner.
I had opportunity this year, too, to read the newly translated novel by Ismail Kadare,

The Siege, which, after my recent thinkings and writings (in C.M. Kornbluth) about the closing of the Modern Age and the beginning of the Age of the Masses, seemed strikingly Modern. This is not to say it has nothing to offer our times, for it is a worthy work, written simultaneously as a novel of history and of symbolism.

Among other books I read or dipped into, this year, some of the more rewarding were related to prisoner-of-war camps in the U.S., which is a separate topic from concentration camps in the U.S. As it happened, though, I also had reason to read up on Japanese immigrant experiences, which of course included the latter sort of camps; and so I chipped away a little more of my ignorance concerning one-half of my ethnic background. It felt gratifying to be reading Bill Hosokawa, a newspaperman my parents knew decades ago in Denver.

Dipping into Phil Klass's Dancing Naked: The Unexpurgated William Tenn has given pleasure for quite different reasons. If I have not read the whole, fat book, I am sure I have re-read some lengthy portions of it enough times to make up for any possible lack of devotion to completeness.

On a different note, literally, I have been doing some other reading I have wanted to do for some thirty years ... because at an auction held at a neighbor's house, this past summer, a quality piano came up for sale. Martha had the money for it — I didn't — so she bought it. I have been doing the reading I lacked the patience for, in my early twenties when I last had access to a piano. I have read through Bach's two-part inventions, and through a miscellany ranging from luminous Handel to the uncentered Chopin (and some really non-centered Moderns); and at this point I'm reading through the delightfully off-center sonatas of Scarlatti, which is something I've yearned to do since back whenever. Later I will stop reading and start studying. Back in the day I used to play a lively piece by another Baroque wildman, Antonio Soler. I have yet to dig up that music again, though. Oh, the feel of the well-balanced piano key! Reading need not be sedentary, you see. 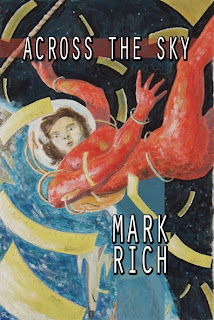 Mark Rich is the author of a major biographical and critical study, C.M. Kornbluth: The Life and Works of a Science Fiction Visionary, which will be released in March 2010 by McFarland. Two collections of his fiction are already in print — Edge of Our Lives (RedJack) and Across the Sky (Fairwood) — as well as chapbooks from presses including Gothic and Small Beer. With partner-in-life Martha and Scottie-in-life Lorna, he lives in the Coulee region of Wisconsin where an early-1900s house, a collection of dilapidated antique furniture, and a large garden preoccupy him with their needs.
Posted by Timmi Duchamp at 6:15 AM

Fascinating stuff, Mark. Dancing Naked is delightful, innit? Klass's compliments to me therein were bad for my ego.