The Pleasures of Reading, Viewing, and Listening in 2009, Pt. 8: Kristin King 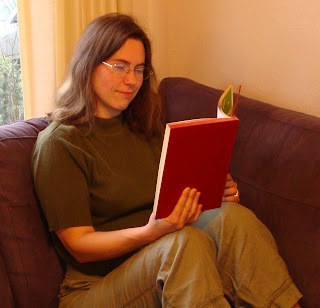 A Sampling from 2009
by Kristin King

Here is a small sampling of the books and shows I've enjoyed this year.

In Ursula Le Guin's The Telling, after the planet Aka joins the intergalactic community, all storytelling is forbidden. What happened? Suty comes as galactic observer and cultural anthropologist to find out. What follows is a quest of mystery and discovery that ends up on top of snowy mountains in a labyrinth of "books, thousands of books, in leather and cloth and wooden and paper bindings, unbound manuscripts in carved and painted boxes and jeweled caskets, fragments of ancient writing blazing with gold leaf . . ." Suty is trying to understand their banned religion, the Telling, which seems to come out of fragmented bits of unrelated stories, but finally comes to understand that the Telling is irreducible, that it is story itself.

Traveler. Italo Calvino learned about narrative from his experience of Italian cinema, where it was common practice to enter the theater in the middle of the movie, and maybe stick around to catch the beginning or maybe not, seeing the films all out of order. If on a Winter's Night a Traveler has ten beginnings to novels, interspersed with the reader's pursuit of the true story and of the woman Ludmilla. It is full of story, tales told in the darkness. As in the Telling, all the fragments of the story come together to make a grand narrative that defies rational explanation.

Doctor Who is a television show that has been an endless source of story since 1963. Like a book, the Doctor's time machine, the Tardis, is bigger on the inside than the out. It can take you anyplace, to tell any story that can possibly be told. The Doctor defeats villains with his wits or, in the best of the stories (such as Hugo award-winning "The Doctor Dances"), through healing. The episode "Silence in the Library" is set on a planet that is a library, containing all the books that ever existed in the universe. It's a treasure horde guarded by a dragon, the Vashta Nerada, devourers who live in the shadow - not every shadow, but any shadow. There, the Doctor meets one of the strongest female characters he's ever encountered: River Song, an archaeologist who has her own adventures, knows his future, and in that future, has learned his true name.

Stories About Borders and Bridges

A shy girl with glasses and a love of books, I learned in first grade that I didn't fit. I'm white, and so I can "pass" as not-other, but only by lying, by holding back parts of myself that matter deeply. And so whenever I've become part of a community and realized I don't quite belong, I've been quick to blame myself. But how I understand my identity and my part in the world has been changing, and it's thanks to writers such as bell hooks and Gloria Anzaldúa, women I read back in 1995 and whose thoughts have been growing in my mind all these years. From Gloria Anzaldúa, I learned the concept of the border crosser, the nepantlera, who becomes a bridge between worlds, and the Borderlands, a transformational space that crosses a geographic, metaphorical, or spiritual border.

I recently picked up The Gloria Anzaldua Reader, ed. AnaLouise Keating and I've been slowly reabsorbing her ideas. In "La Prieta," she writes about herself as a border person:

"Think of me as Shiva, a many-armed and -legged body with one foot on brown soil, one on white, one in straight society, one in the gay world, the man's world, the women's, one limb in the literary world, another in the working class, the socialist, and the occult worlds. A sort of spider woman hanging by one thin strand of thread."

Hers was a painful life. As a child she labored as a farm worker near the Mexican border, had an adolescent's body at the age of three and a hysterectomy at the age of five, and was so sensitive that the pain of others hurt her too. Too white, too brown, too gay . . . But, she asks, why? "Growing up," she writes, "I felt that I was an alien from another planet dropped on my mother's lap. But for what purpose?"

She has an answer to that question, which brings me to Adulthood Rites by Octavia Butler. The main character, Akin, is a half-human, half-alien hybrid. He fits in

neither place, and he suffers for it. Not only do the human and alien (Oankali) worlds reject him, but he is also torn from an all-important sibling relationship; it's a loss that can never be repaired.

But why? His suffering makes it possible for him to bridge the gaps between the human and Oankali worlds and bring possible salvation to humanity. The Oankali believe that humans suffer from a deadly genetic contradiction of intelligence plus hierarchy, and that it will necessarily lead the human race to destroy itself. And so, after humanity has all but wiped itself out, the Oankali are not prepared to save them. But at the end of the book, Akin is ready to take on the work, and it's because he's traveled between both worlds.

Like Akin and like Gloria Anzaldúa, Octavia Butler suffered greatly for her differences. She was too big, too black, too dyslexic. But for what purpose? Going back to Anzaldúa's question, perhaps it is to build El Mundo Zurdo (the left-handed world), where "the queer groups, the people that don't belong anywhere, not in the dominant world nor completely within our respective cultures . . . can live together and transform the planet."

It is a tragedy that both Gloria Anzaldúa and Octavia Butler died much too soon. And so in the middle of an essay on pleasures I have to add a lament, for the troubles of their lives, for our loss of their imaginings.

Stories About the Underworld

Perhaps it's time to make a border crossing from our physical reality to the world of the soul, the underworld. So here are a few underworld stories.

"The Beads of Ku" by Nisi Shawl is an underworld story with humor and charm. The heroine, Fulla Fulla, has a head for business and the ability to move gracefully between our world and the Land of the Dead. When her husband grows jealous of her connection with the underworld, he breaks the rules, and it's up to her to save him, using her wits and her skill at wrangling to outwit the king of the dead. It's one of my favorites in her collection Filter House.

Humming The Blues by Cass Daglish is a translation of an underworld story written by the first person ever to sign her name to a text. Her name was Enheduanna, and in 2350 B.C., she wrote a poem about the goddess Ananna, who descended to the underworld and, with the help of her female friends, emerged triumphant. The exact meanings of the cuneiform text are impossible to know now, so Cass Daglish did her best by making a "jazz translation" of the text, delving into different possible meanings and using them to create a work of poetry.

Stories in Picture and Chapter Books

Cheek by Jowl by Ursula Le Guin is a defense of animals, fantasy, and children's

literature. In "The Critics, the Monsters, and the Fantasists," she writes, "To throw a book out of serious consideration because it was written for children . . . is in fact a monstrous act of anti-intellectualism. But it happens daily in academia."

It's all part of a general disrespect for children in our culture. It took being a mother for me to understand how seriously dysfunctional it is to marginalize and silence children. After all, a child is at the core of every one of us. Until you have paid serious attention to children, you can understand very little of the human soul. Children are alien, other, and so are we. So go ahead, find a children's book you loved as a child, and enjoy it all over again. You know you want to.

Here are a few children's books that will cheer you up in the dead of winter.

bell hooks' Homemade Love is about Girlpie, a well-loved child. She breaks something special, and the break is devastating - has she lost the right to be loved? But her parents help her fix it. This is all about forgiveness and mending ruptures.

Shibumi and the Kitemaker by Mercer Mayer is a beautifully illustrated story about an emperor's daughter who, on seeing the squalor of the city below her palace, goes aloft on a kite and refuses to come down until the city is as beautiful as the palace.

The ending is exactly as ambiguous as it ought to be. In the beginning of the book is a poem about "authority without domination," which I wrote down on a scrap of paper and then lost on my desk. So you'll have to get the book if you want to read the poem.

Boo and Baa Get Wet, by Norwegian authors Olaf and Lena Landstrom, is part of a series about siblings named Boo and Baa, who have the innocence of children, the autonomy of adults, and a clearly loving relationship. They have little adventures that go wrong but always end up okay. Ants on a picnic, a cat stuck up in a tree, a cabbage that rolls down a snowy hill. In Boo and Baa Get Wet, they leave their croquet set outside and have to go get it in the middle of a thunderstorm. My favorite part is when there is a flash of lightning and the text says, "Now what? What happened?" In this silence, I can stop in my reading and talk to the children about what is going on. And the series is full of these little moments.

Pippi Longstocking by Astrid Lindgren is the anti-Bartleby. Bartleby's refusal was passive and led only to his death, but Pippi's "won't" just means she has better things to do with her time. Luckily, she can back up her "won't" with brawn, wits, and a pirate chest full of gold. While Bartleby let the police carry him off, Pippi led hers on a merry chase on her rooftop, letting them down only when they asked nicely. Hurrah, Pippi! Hurrah, humanity!

My favorite movie from this year is Not One Less, about a thirteen-year-old girl who takes a job as substitute teacher in a remote Chinese province for an entire month. She has no qualifications and seemingly little to teach, but she's the only one who volunteered. How could she possibly take charge of a class? When one of her students leaves the school to find work in the big city and then gets lost, she knows she has to find him. It's impossible. But she is stubborn, determined, patient, and strong. Can she bring him back? This is a good counterpoint to the travesty of No Child Left Behind.

Kristin King is a writer, parent, and activist who lives in Seattle. Her work has appeared in Calyx, The Pushcart Prize XXII (1997), and other places. She also teaches writing and juggles.
Posted by Timmi Duchamp at 12:58 PM