Crazy as it sounds... 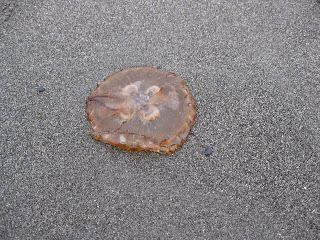 On Sunday I walked out to Point Wilson, as far as the pile of big rocks at the end, until I got cut off by the tide. (I'd really like to make it out there when the tide's low, so that I can round the point and walk west, along the north beach, too.) Once there, I climbed nearly to the top of the rocks and found a good (if cold and damp) perch for watching the waves. After doing this for awhile, I confirmed what I thought I saw the other day-- that some of the waves were moving sideways-- was not an illusion! Previous to perching on that rock, when I'd still been walking, at 100 yards or so short of the Point, I noted that the waves were coming in crooked. But then as I moved near the Point, I realized that whole patches of the surface were not coming forward as waves, up onto the beach (even when they formed, which happened far less often than in every other place on the beach), but were in fact as they swelled heaving north.

Here's the appropriate bit that I wrote in my notebook while sitting on the rock:

It's complicated, I suppose, because the beach curves as it approaches and then rounds the Point, until it starts going west rather than north. But more important, probably, is that the tide is going out, which means that Puget Sound is being pulled out into the Pacific. In Admiralty Bay, that means the water is being pulled north. But round Point Wilson (which I can't see for myself from here but certainly do know), that means the water is getting pulled west. Anyway, sitting here on the rocks, I can see very clearly that a huge, nearly flat patch of sea swelling with incipient waves that never come to anything is indeed moving sideways! What an incredible sight! No wonder it made me dizzy, when it took me unawares!

*
I went back on Tuesday afternoon, to take another look at what the water was doing near Point Wilson. Here are my notes:

It's a cold, brilliantly sunny day. Mt. Baker in all its massy snowy glory is stupendous. 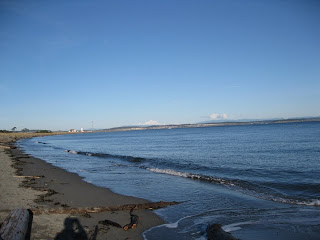 I'm sitting near where I sat on Sunday afternoon, only on a log, not a rock. That's because the rock I occupied on Sunday is still covered with water. The water is too high yet to walk south along the beach, since at high tide the water in places reaches right up against the bluff, so I've walked out to Point Wilson again. On the beach to the north there's plenty of leeway.

There isn't much surf today, but here at the tip of Point Wilson, where the waves come in at an angle to the beach and meet a clutter of rocks, there's considerable churning and plenty of foam. But wait! I've just realized that the tide hasn't yet turned! I'd been assuming that the tide had just turned and was starting to go out. But staring at the water, I can see very clearly that that flat patch of water that moves sideways is moving south, not north! It must be almost at the top of high tide. (Really must get a tidetable.) Yes, it's very clear now. The water that moves sideways is moving right rather than left. Presumably if I sit here for a while longer I'llsee the tide turn. (But with the wind whipping around the Point, and with my having worn my rain parka rather than my wool coat and left my scarf behind because the warmth of the sun in my apartment deceived me, it's damned cold, even sitting in the sun.) 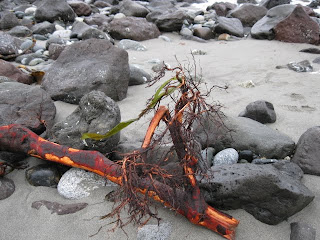 [I took the picture to the left while sitting on one of the big rocks.]

I've been watching a man walking on the top of the rocks (coming from the other side of the Point) set up a tripod with an industrial-strength camera. (It's digital: I can see the viewfinder. But is it a movie camera, or one for taking stills?) He's got the camera facing Mt. Baker. Ah, now he's pivoted it toward Rainier, which is pale in the hazy distance. But then almost immediately swung it back into its previous position.

Looking back at the water, I see that the currents are now looking very weird. Is the tide about to turn? It's as though the water is confused; the wind can't be helping-- it's blowing south, mostly. But most of the water is still moving north (though there are big areas, further out, that are not). There's a lot of chop further out, suddenly-- dark blades of water without much foam, appearing and then dissipating. I wish I'd brought the binoculars. Could the guy with the camera be focusing on marine life of some sort? That would explain why the barge is hugging the opposite shoreline. Tom says that when he left me here on Nov. 22 and was taking the Bainbridge ferry to Seattle, the captain announced there was a pod of Orca whales visible from the ferry.

*
As I walked back, it became clearer that the tide had turned while I was sitting on the log, watching. Some of my footprints in the sand had been partially washed away, leaving just faint indentations. Perhaps the oddest thing I saw was a very brief surge that died as quickly as it had arisen, where long, unbroken waves formed to a height of about three feet. And then the water became nearly flat again, forming wavelets measurable in inches rather than feet. So many mysteries... 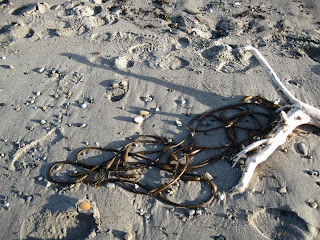 Posted by Timmi Duchamp at 5:51 AM