My neck is starting to get screwed up from my non-ergonomic set-up. At home I have a wonderful, adjustable chair with a high back against which I often lean my head. This reminds me a little too viscerally of how when I was a teenager my neck would get unbearably stiff from sitting on a piano bench, hunched over the piano, for hours. (I usually had to get a workout from an osteopath twice a week to cope, as well as cut down the amount of time I spent practicing.) Until yesterday, pummeling a certain part of my neck with hot water in the shower was enough to work the kink out of it. But that's not working anymore, and now the pain's spreading to my shoulders and middle back. I suppose I should be doing a few minutes of exercise every hour or so. The trick is remembering... 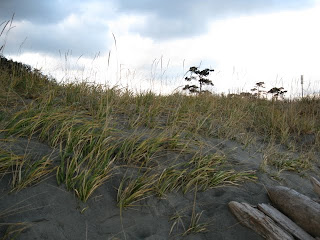 It was too cold for me to stop today at the halfway point of my walk and take notes: my fingers were too stiff, even if I'd been appropriately dressed for the weather-- which I was not. I wished I'd worn the wool pants I'd brought with me in case it got cold enough for them, and I wished I'd worn my heaviest coat. (Neither of these has been necessary until now.) Worse, though, was that I forgot to change into my hiking boots before setting out! So I was wearing slip-on street shoes, totally unsuited for the beach at high tide. (I forgot, I suppose, because my mind is now always partially on the novel, even when I'm thinking about or doing other things.) 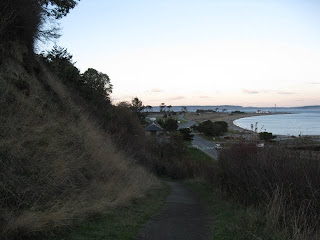 Because of the difficulty I was having walking, I decided to take the long way back, via the road. And that also gave me the opportunity of visiting the north side of the point (since the road makes a loop there). I'd thought there were no mountains visible today, but from the north side of the point I could see mountains in Canada. Walking back, the bones in my face and my ears ached. Actually, for the first time I encountered only one other person out walking on the beach-- and she was dressed with good strong boots, a heavy padded coat, and one of those hats that come with earflaps (which she had down over her ears) and tie in a bow under the chin.

Though I don't have notes from today's walk, I still have yesterday's to post, in which I learned something I probably should already have known. I wrote them from a long near the pile of rocks at Point Wilson:

So today we have three guys with cameras (two on tripods) plus binoculars. I'm pretty sure they're filming container ships going through the Strait of Juan de Fuca and into the shipping lane to Seattle and Tacoma. I'm thinking now that that's what they were shooting the other day, too.

The water's quiet this afternoon-- quieter at Point Wilson, actually, than further south-- almost silent. (Could this be because the differential between high and low tide is only about a foot?) The light is distinctly wintry. Although the sun is shining for yet another day (hard to believe this is December!) and all the mountains are out, the light seems oddly muted. When I left the apartment at two, I saw a short bit of rainbow high in the sky-- like a piece of prism-colored ribbon threaded through the clouds. Now it's almost three, and my shadow is long and fuzzy-- not sharp, as I'd expect it to be.

Really, I can't believe how still the water is at the Point-- no waves at all, except for an occasional backwash from the container ship.

Whoa! Something big is coming in-- I can here its engine, though I can't see it, and it's creating major waves. But no, it's not something on the water-- but a helicopter! I hadn't realized helicopters create wakes when they fly over water. Of course, when I think about it, it's obvious. The waves are coming in at a sharp-- say 60 degree-- angle to the shore. I can't see te chopper now, but I'm still hearing it. Must be somewhere south of here, but still over a piece of Puget Sound, since the waves are still rocking in.

So much for the sea's barely moving today!

Q. Do they ban helicopters from flying over the ferry lanes?
A. Obviously not-- since the Port Townsend/Keystone Ferry, which I can see at this moment, not far out from Whidbey Island, sails this part of Puget Sound.

The guys with the cameras have gone. I was so distracted by the helicopter's creating such a powerful wake that I didn't notice them leaving. 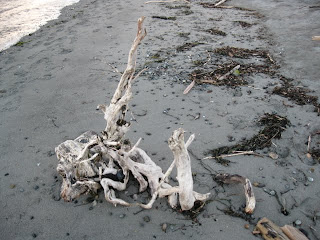 Posted by Timmi Duchamp at 5:37 PM