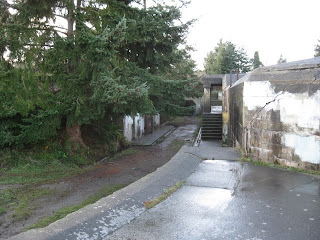 In the US, ruins usually aren't the remains of old castles or monasteries, but abandoned mining works, ghost towns, rural barns and outbuildings, derelict tenements, and sites once occupied by the military. I can think of several parks in Washington State that were once forts or bases. None of them, though, match Fort Worden in the extent to which the physical structures have been preserved and repurposed-- or in the number of derelict strucutres that have been left standing. On Monday, I encountered quite a lot of these. Here are a few of the notes (in one place slightly expanded after I got back to my apartment) that I took during my walk on Monday, after lunch:

The rain stopped just before I set out on my walk, and the fog that had rolled in over the bay around eleven and socked it in, lifted. When I started the walk, the clouds were going fast, exposing big patches of blue. As I pushed up the hill and came across the first derelict structures, the sun burst out. At the moment, I'm sitting on a cement bench that's cold and damp, looking out over Point Wilson from the bluff above. The water's now a silky, sedate blue. I've been tramping around Artillery Hill, randomly taking this trail or that, crossing paved roads (that may or may not be open to vehicular traffic-- my guess is not, since although I frequently caught glimpses of people walking along these roads, I never saw any vehicles. I'm glad to have brought my sticks, since the trails are slippery with mud and the paved surfaces slippery with wet moss and algae.

The sun is shining on whatever coast is northeast of here, lighting up the sand on its beaches and the sandstone of its bluffs. At this moment I'm especially glad to have the sun and the sea looking so pretty. (I don't usually think of the sea itself as pretty-- it must be the color and illusion of its silky texture, which would vanish, of course, were I actually to climb down to beach level.) Walking through these derelict military structures under the bright eye of the sun, made me deeply uneasy.

I took a few pix, but the sinister aspect may not come through. (I'm not at all practiced at taking photos.) Damn, drops of water keep shaking out of the trees, hitting the page of the moleskin notebook I'm writing on. The ink seems to be holding up, but it's distracting to have to keep stopping to blot the paper with tissue. When I started the walk, I wanted to see how close the sea was to the back side of the park. My assumption was that a view of the sea would open up once I got to the crest of the hill. Along the way I passed here and there old deserted buildings half hidden by forest growth. And then I began to see various batteries, where big canon were once placed. I walked past them without investigating, since clearly they were not going to give me a view of the sea. But finally I came to the Main Battery, which looked as though it 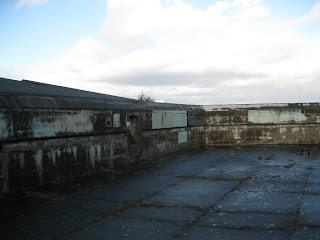 was built into the side of the bluff. Also, I heard the sea. So I was certain it was close. There were stairs leading to a sort of concrete deck or courtyard, so I climbed them, thinking that there'd be a view over the far wall. I hadn't realized from ground level that the wall enclosing the courtyard would be too high to see over. So I went 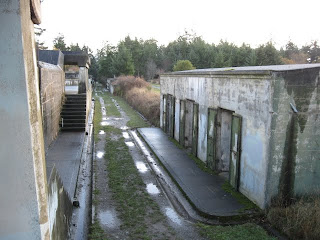 back down and wandered along a lane. As I walked, on one side were the disused structures (presumably housing the guns), each with the same set of stairs and courtyard, on the other side low storage buildings (presumably for materiel). Many of the latter had rusty heavy doors that 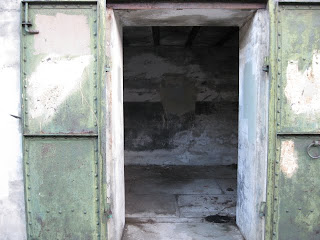 looked as though they could still be opened and closed. I kept expecting to see a furtive pair of eyes peering out at me from their dim recesses. And so though I was walking in full sunlight, the whole aspect became unspeakably sinister. (Perhaps if it had remained overcast and raining, the effect would have been softened and blurred, and these material objects would have provoked other thoughts than those I actually entertained, would have rendered a completely different sent of images in association with them.) All the while, of course, I continued to hear the sea and grew frustrated and anxious at my inability to see it. But the concrete structures kept going on and on.

It came as a relief when the lane opened into a meadow with the usual amenities of parks-- directional signs, an outhouse, a trash can. One of the directions posted on the sign was to an overlook of Point Wilson. I would not get an overlook of the northern coast, a view of the area the guns were targeted on. But I would at last be visually reconnected with the sea, which by that point had become ridiculously important.

The battery was apparently dismantled in the 1940s. It was built in the last decade of the 19th century and the first decade of the 20th. Parts of the film An Offier and a Gentleman were made here in Port Townsend, which is one of the few ports registered as an official "Victorian Port." The Commanding Officer's House in Fort Worden, which stands first in a row of officers' houses and has the best view of the sea, is now a museum, complete (I understand from the literature: I myelf haven't yet been inside it) with period furniture. A huge grass quadrangle (which can host numerous football, baseball, and soccer games simultaneously) is called the Parade Grounds. On the side of the Parade Grounds facing the Officers Houses are large white wood-framed institutional structures. One of these is now the Park Office, another the Coast Artillery Museum. (Two upright torpedoes flank its front walk.) This is the sort of memorabilia I expect to see in the South and the East. But in Washington State? Just think of what a wilderness this place was in the 1890s. (For an idea of that, check out Molly Gloss's Tiptree Award-winning novel, Wild Life.)*

My notes ended there. But Tuesday morning, I wrote this:

About an hour ago, as I lay waking in a miraculous dazzle of sunlight, listening to the birds before getting out of bed to make coffee, it occurred to me that if the batteries' offered no view of the sea to me, that probably means that the men tending and firing the guns, which faced north and were placed so that they could fire at ships heading into Puget Sound through the Strait of San Juan de Fuca, would have no view of what they were shooting at. I suppose one could say thatl the masses of concrete blocking their line of sight on the sea also offered them protection from potential incoming fire. (Did the bay ever come under attack, I wonder?) But it also suggests that the identity and circumstances of their targets was perpetually on a need-to-know basis. Who needs a view of the sea when the chain of command is so tight? Depends on how you define "need," I guess.
*
And then later Tuesday, while I was eating lunch, I read this, from Lynd and Grubacic's Wobblies and Zapatistas:

Hierarchical leadership was precisely that which the Wobblies most fiercely contested. I first learned of the I.W.W. from a book in my parents' living room. It was The New Men of Power by C. Wright Mills. To offset his sad tale of the bureaucratization of CIO union officials, Mills placed at the beginning of his narrative one of the eye witness accounts of what happened when the good ship Verona, full of Wobblies, approached the shore of Everett, Washington in 1916 to support protesting workers there. As the barge approched the dock,

Sheriff McRae called out to them: "Who is your leader?" Immediate and unmistakable was th answer from every I.W.W.: "We are all the leaders."

The sheriff and his men then opened fire, killing five.

Everett, of course, is not far from here. It, too is on Puget Sound, just a little further south by water.
Posted by Timmi Duchamp at 5:11 PM