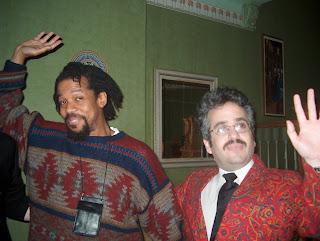 For a couple of years, my official bio (in, for example, the Daughters of Earth anthology) read, "As of this writing, Dr. Lukin teaches in the English Department of Temple University, where he and novelist Don Belton occasionally bemuse the staff with their renditions of classic show tunes." I was friendly with Don in Philadelphia from 2003 to 2006 and then lost touch with him: I think hearing of my brother's abrupt death in mid-2006 really unnerved him because his own brother had killed himself in the mid-nineties, within fourteen months of both his parents' deaths, leaving him very isolated. "I can go to gatherings of my remaining extended family," he said, "but they'll scowl at me and remind me repeatedly that I'm destined to burn in Hell." He had a sister too, but she'd disappeared into the slums of Newark many years earlier, and no one had been able to find her.

Notwithstanding these catastrophes, Don managed to remain an extremely open and generous personality, full of wit and enthusiasm. He was a big fan of my wife, disability studies maven Ann Keefer, whom he affectionately called "Reefer." He had an amazing baritone voice that he used to sing "We Shall Overcome"; he also did an awesome Randy Newman impression ("How about that," he said of himself one day as we walked across the quad, "a black guy imitating a Jewish guy who imitates black guys!"). His critiques of Terry Gross and Tavis Smiley were hilarious and on-target. I learned from conversations with him about Toni Morrison, Bertolt Brecht, and several other great artists. I helped him edit his job application letters; he advised me on strategies for teaching Morrison's Song of Solomon. Walking through West Philadelphia with him, I was introduced to a great Ethiopian restaurant; when I tried to take him for dessert to a branch of the coffeehouse chain Cosi, he demurred: "What is this? Looks like some white girl's birthday party!" Which is now the phrase that Ann and I use for that franchise.

A very sensitive guy who wore his vulnerability on his sleeve, he predictably became something of a bully-magnet: seven out of eight students loved him, but the eighth who hated him were very aggressive about it, being disruptive in class, asking hostile questions ("Are you going to give us more guidelines for our paper's argument, or is this assignment just more liberal Creative crap?"), grieving their grades to the Dean ("How dare a man like that give me a C?"), and, on one occasion, taking the time during which he'd left the class so they could fill out their course evaluations, drawing a little gallows on the blackboard under the word "lynch." And, I'm sad to say, I and a few other colleagues were sometimes more unsettled than compassionate in our response to the tears he shed on such occasions.

Don worked extremely hard at his courses and his one-on-one interactions with students. Throughout his career, outsiders sought him out for sympathy ("When I was at Macalester, the Jewish students came to my office for support, because I was the only non-WASP they could find to sympathize with the problems of minorities."). He won a plaque from Temple's Queer Student Union for being the professor most supportive of LGBTQ students. As an adjunct and a lecturer, he brought a level of expertise to his classes in World Cinema, Creative Writing, African-American Literature, Modernism, and other fields that outdid that of some tenured professors. He could improvise an on-the-spot explanation to a casual interlocutor of how Brecht helps us understand Nina Simone (and vice versa) or how the theories of Julia Kristeva might illuminate The Bluest Eye.

Don had worked as a science journalist in Philly and been a folklorist in D.C. (where he'd been called on the carpet at the Smithsonian for "Asking an insubordinate question of Bernice Johnson Reagon"). He'd studied under Bernard Malamud in college, been friends with James Baldwin (and had a big cache of Baldwin's papers), and worked with queer theorist Eve Sedgwick and playwright August Wilson -- all of them now gone. He was as serious as anybody about a meticulous writing style --the chief frustration for me in reading his black masculinity anthology, Speak My Name, was that few of the contributors could live up to the prose style of his introduction. Writing ethically was also an obsession -- he once or twice read passages of fiction to me to make sure the depiction of Jewish characters was not offensive.

I only just learned that, a couple of years after we'd fallen out of regular contact, Don had gotten a job as an Assistant Professor at Indiana University. The fact that he was hired by a public ivy like Indiana with only a master's degree (an M.A. -- he'd received a few letters from Creative Writing programs in the past saying, "Don't waste our time by applying to us without even an MFA.") is a testament to the breadth of his knowledge and his abilities as a great educator. And also gratifying just because he was so eager, when teaching four courses a semester in Philly, to find a tenure-track job that would allow him time to return to his first love, writing fiction.

I received an email from Chip Delany Tuesday evening reporting that Don Belton had been murdered by a homophobic veteran in Bloomington. I hope to write more about that, and the public response to it, in my next post.

ETA: It seems that I was too hasty in implying that he had no sympathy in his extended family: a Philadelphia cousin of his, one Leigh Harold, is showing up in the blogosphere to praise Don and to decry the claims made by Don's alleged killer.

So sorry to hear this, Josh. Sounds like we lost a good person.

Josh: the persecution continually directed at our gay friends is disturbing. With the loss of Chris and Don in such quick succession, our community is threatened. Please let me know how I can help commemorate your friends. I have promised the family to create a fitting online memorial to another disability studies scholar we lost this year, Bonnie Moulton.

Hello, I'm from Bloomington and just walked back home from Don's candle light vigil at the court house square. It was very very cold but the community came out in droves. My wife is a colleague of Don's and I did not know him very well. But my brief interactions with him have left deep impressions in my heart. It's great to read about Don from someone who knew him well.

Did you know he had a radio show on our community radio station WFHB? It was excellent!

As a VERY recent former student of Don's (My last class with him was less than two weeks before he was murdered) some statements circulating on different websites about Don disgust me. Don Belton was hands down the kindest man I have ever encountered in my life. There has yet to be even one whisper of ANY person experiencing a remotely similar situation with Don as Griffin claims he experienced. Instead, there have been countless people coming forward ranging from family, friends, colleagues, former students, and mere aquaintances who are continuing to voice their support for Don and share stories of his genuinely kind, and caring persona. Michael Griffin went to Don's house with the intent to kill, as other news stories mention, he brought a change of clothes AND a ten inch blade. It frusturates me that news stations contiue to muddy the story and present the murderer as the victim, when the actual victim is Don. I can only pray that the jury sees through Griffin's accusations. Along with that, I hope that people continue to come forward to voice their support for Don Belton in attempt to keep his impecable legacy untarnished, since he is not here to do that himself.

thanks again for your beautiful testimony, and vivid reminiscences of Don. I missed talking to him when he left Temple. I'll continue to miss him.

Thanks for sharing your experience of Don. The "white girl's birthday party" comment made me laugh out loud. I, too, had fallen out of touch with Don. I must say, he was not above Starbucks. I spent many an hour with him there. It was something of a white girl's birthday party as well. We sat down once in a packed room, and proceeded to have a lively discussion about prejudice. When we looked up, the room was cleared. Don was a good, good man.