The Pleasures of Reading, Viewing, and Listening in 2018, part 12: Erin K. Wagner

The Pleasures of Reading, Viewing, and Listening in 2018
by Erin K. Wagner

Since I teach literature for my day job, I often encounter stories and books I like in the line of work. What can I teach? What will instruct my students to be analytical and empathetic readers? My list of texts enjoyed in 2018 include many I brought into the classroom. The other half are those I needed to read and watch to relax and recover from the job!

Jemisin hardly needs any praise from me, given that she’s broken records when it comes to awards. That said, her novel was one of my students’ favorites and the book only gets better with a re-read. Her commentary on today’s reality is embedded in a beautifully-crafted and compelling magic system and world. Not for the faint of heart.

LaValle takes on the racist and colonialist problems of the perennially famous Lovecraft. In doing so, he creates a chilling narrative all his own that made me a little nervous about turning off the lights.

I was teaching Binti in my class at the same time as I was reading Who Fears Death at night. The two complemented each other, emphasizing how much Okorafor’s prose reminds me of Octavia Butler’s. Who Fears Death doesn’t flinch away from the darkness of the world, while Binti embraces a more optimistic Afrofuturistic stance.

One of the best things I read this year! I waited eagerly for this book to be released, and it did not disappoint, establishing Roanhorse as one of the most vibrant Native American writers today. A nuanced and smart urban(esque) fantasy that imagines a post-apocalyptic future with modern relevance.

This book reminded me of the wonder and pure fun I had reading fantasy novels as a kid. Fun characters and quick-paced plot. I need to find time to read the rest of Schwab’s work.

I couldn’t make this list without considering the classic short stories that I re-read and taught this fall. Every time I read “Bloodchild,” I like it more. It is such a clever reconsideration of classic expectations surrounding gender and sex—with some great insectoid aliens. And Le Guin never disappoints as she considers the definition of humanity itself.

A (slightly) futuristic film that considers how race and class politics impact networks of crime and family. Some truly empathetic performances. But also, I love Sterling K. Brown in everything (see: Black Panther!).

This was one of my favorite TV shows of the year—and of all time? That may sound hyperbolic, but this carefully crafted period drama (with horror elements) examines the true terror of men (and by extension, humans) in desperate situations. Some excellent performances.

Even more than the much-acclaimed Haunting of Hill House, this terror anthology series contrasts the struggles of the everyday (with all its prejudices and problems) with the uncanny horror so appealing in Stephen King’s best work. 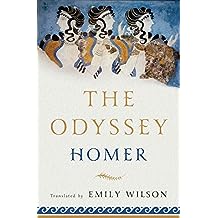 I may have received this book months ago, but I’m still trying to find the time to read it. I’m hoping winter break will be that time, because this translation has made well-deserved waves as the first translation of the famous epic by a woman. The translation is supposed to provide insight into the marginalized characters and perspectives of the text.

Erin K. Wagner is a speculative fiction writer, interested in examining how the human responds to the inhuman. She grew up in southeast Ohio on the border of Appalachia, but now lives in central New York, where she hikes in the Catskills and listens for ghostly games of nine-pins.She splits her time between academic research, investigating how medieval English writers navigated their own religious identities, and creative writing. Aqueduct will be publishing her novella, The Green and Growing, as a volume in the Conversation Pieces series in early 2019. Her stories have appeared in a variety of publications, from Apex to Luna Station Quarterly, and her short story "Running Straight" was a finalist in the 2015 Omnidawn Fabulist Fiction Chapbook contest. You can visit her website at https://erinkwagner.com/.
Posted by Timmi Duchamp at 6:00 PM