The Pleasures of Reading, Viewing, and Listening in 2016, pt. 17: Lesley Hall 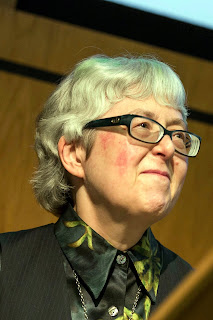 The Pleasures of Reading, Viewing, and Listening in 2016: Some Free Associations
by Lesley Hall 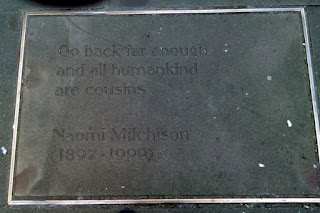 This was an unexpected and memorable thing that I saw during a brief visit to Edinburgh this year: the flagstone for Naomi Mitchison in Makars’ Court outside the Writers’ Museum in the Old Town. (There was also a wonderful portrait of her in old age in the National Portrait Gallery of Scotland, but as always seems my fate, could not find a postcard of it in the gallery shop). Mitchison lived through the travails of the twentieth century, the First World War, the Spanish Flu Epidemic, the rise of Fascism in the 1930s, the Second World War, as well as enduring personal tragedies, and continued to retain her progressive and humanitarian convictions, her commitment to activism, and the optimism that marks her science fiction novels, written when she was over sixty, Memoirs of a Spacewoman and Solution Three.

It may be noticed that the background of that portrait references one of Mitchison’s other later life involvements, her relationship with the Bakgatla people of what was then the Bechuanaland Protectorate, at the time when it was making the transition to independence as Botswana. This leads me to recommend very highly the recent movie A United Kingdom, about Seretse Khama, heir to the traditional kingship of Bechuanaland, and the first democratically-elected President of Botswana, and the political and personal costs of his marriage to an Englishwoman, Ruth Williams, whom he had met while studying in London, in the face of opposition both from the British government, anxious to conciliate South Africa, and from the more traditionally-minded of his own people, including the uncle who had acted as his regent. (It’s based on the 2006 book Colour Bar, by my friend Susan Williams.)

This has not been a year for which I recall a large number of books with great excitement: so much of the year has encouraged a retreat into comfort reading and old favourites, something to evoke that ‘curled up in the window seat with Little Women’ feeling: though I’m not sure that the somewhat pejorative term ‘retreat’ is apt. Surely providing comfort in a harsh world is a virtue?

One publishing event that did excite me was the issue of two novels by Stella Gibbons (herself a great proponent of the ‘gentle powers’ of 'Pity, Affection, Time, Beauty, Laughter' ) that remained unpublished at her death, Pure Juliet and The Yellow Houses. I was slightly irked at the media touting of these as a remarkable sudden discovery when they were mentioned in the 1998 biography Out of the Woodshed: I have been hoping for their publication ever since given the renewed interest in Gibbons’ works. I will concede that these two are probably largely for the Stella Gibbons completist (such as me). It may be worth remarking here that although it is recurrently noticed that her most famous novel, Cold Comfort Farm, is in fact set slightly in the future from the time of writing and includes a few small science-fictional elements, particularly in her later post-World War II works there is a strong fantastic (with an occasional touch of horror) tendency, but she has largely been ignored even by those who have gone about recovering the tradition of British women writers in the fantastic mode. Possibly because these elements are very much embedded in the same kind of vividly realist narrative as her other novels.

Talking of rediscoveries, and neglected women creators, there was a stunning exhibition at the Dulwich Picture Gallery earlier this year of the works of Winifred Knights – an artist who enjoyed considerable acclaim in her lifetime, won major awards, but had almost entirely fallen out of the history of twentieth century British art, partly due to the relative smallness of her body of work, her very slow process of creation, her early death: but a good deal, one must surmise, due to the visual arts version of Joanna Russ’s How to Suppress Women’s Writing.

Knights’ aunt Millicent Murby was a late Victorian/early twentieth century women’s rights campaigner and social activist: she appears in the painting Mill-Workers on Strike and Knights also did a portrait of her. Thinking of that world of feminism and broader activism brings to mind a book I seem to recollect raving about to Timmi when I was at Wiscon, Seth Koven’s The Match-Girl and the Heiress (2015) a very rich and nuanced social history based in the relationship between an East End working girl and a middle-class reformer doing settlement work there. Not only fascinating in itself on these two women, it’s a fine example of how what might look like a micro-historical study is a way into the immense complexity of Britain and its Empire, class, gender, women’s relationships, women in the workplace, etc, at the period.

Lesley Hall was born in the seaside resort and channel port of Folkestone, Kent, and now lives in north London. She recently retired from a career as an archivist of over 40 years. She has published several books and numerous articles on issues of gender and sexuality in nineteenth and twentieth century Britain, and is currently researching British interwar progressive movements and individuals. She has also published a volume in the Aqueduct Press Conversation Pieces series, Naomi Mitchison: A Profile of her life and work (2007).She has been reading science fiction and fantasy since childhood and cannot remember a time when she was not a feminist. Her reviews have appeared in Strange Horizons, Vector, and Foundation, and she has been a judge for the Tiptree and Arthur C. Clarke Awards. She has had short stories published in The Penguin Book of Modern Fantasy by Women (1996) and The Penguin Book of Erotic Stories by Women (1995). Visit Lesley's website.

Posted by Timmi Duchamp at 1:30 PM