The Pleasures of Reading, Listening, and Viewing in 2016, pt. 4: Alisa Alering 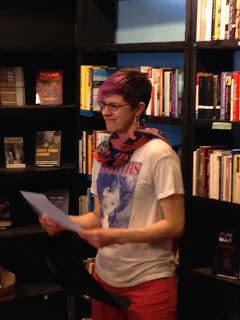 The best book I read this year is Evicted, by Matthew Desmond. I’ve seen it on a lot of year-end “Best Of” book lists, and I’m not surprised. It’s a well-researched, well-documented, yet extremely readable examination of renters, landlords, race, and social policy in Milwaukee. If that sounds dry, don’t believe it for a minute. It is just a fantastic book; Desmond tells the personal stories of landlords and tenants, both black and white, and shows a system that is fundamentally broken and causes far more harm than might initially appear. The only downside to reading this book is realizing how far we are from any practical solution.

A Stranger in Olondria, Sofia Samatar - I’ve been meaning to read this for ages, but Samatar being GoH at Wiscon this year gave me the shove I needed. Beautiful writing, beautiful immersive world. Rich with the possibilities of story and that element of elusiveness, of the magic being somehow just one step out of reach, just one breath beyond the candlelight, that makes it all the more compelling. Glad I finally got there.

The Chimes, Anna Smaill - This one ended up winning this year's World Fantasy award, though I hadn’t heard of it until it appeared on the finalist list. A tale of post-apocalyptic England (London/Oxford), it reminded me of both Riddley Walker and Clockwork Orange. Though there is a strong musical component to Smaill’s dystopia, it was the idea of an entire society living without long-term memory that I found most fascinating.

The Last Confession of Thomas Hawkins, Antonia Hodgson - When I travel, I require a good mystery, preferably historical, for airplane reading. Hodgson delivered with this tour through the teeming streets of early 18th-century London with the ne’er-do-well Hawkins.

Sleeping Giants, Sylvain Neuvel - I read this during the Thanksgiving holiday as I was recovering from a bad cold and my partner was unconscious in the next room with the same cold that I had thoughtfully passed on to him. Despite clogged pipes in my head, I read it straight through, the pages turning quickly, curious about why the ancient alien robot hand had suddenly been discovered in South Dakota. It’s been a long time since I’ve had that kind of uncomplicated reader’s experience, and for that reason I think of this book fondly.

Swing Time, Zadie Smith - A Guardian essay by Smith on “Dance Lessons for Writers” persuaded me to seek out this tale of two mixed-race girls from London and the different paths their lives take. It’s about friendship and family, money and fame, and all the different ways of being in the world. I’m only halfway through, but I still know it’s one of the best books I’ve read this year. It does very well one of my favorite things I like for books to do: tells me in intimate specific detail about lives I will never experience.

I didn’t read a lot of short fiction this year, but of what I did read a few stories have stayed with me and deserve a mention.

“The High Lonesome Frontier,” by Rebecca Campbell (Tor.com) - Something about this elliptical story that follows an old ragtime song through time touched me in a way that I prefer not to analyze but only to enjoy.

“I Will Follow You” by Roxane Gay (Best American Mystery Stories 2014) - This story about two sisters who were the childhood victims of crime is unique, vivid, and kind of heartbreaking.

Also in Best American Mystery Stories 2014—edited by Laura Lippman and a solid volume overall—I enjoyed the final story, "Antarctica” by Lauren van den Berg, a mesmerizing tale of a woman who travels to a research station in Antarctica, ostensibly to collect the remains of her brother who died in an accident.

I always have an audiobook on hand to help me through long drives, exercise, and cleaning the cat box. A great audiobook isn’t just about quality fiction. It has to be a story that suits the oral format, that sounds good being told, and the narration can make or break the experience, no matter how stellar the writing. The ones below are outstanding in both respects.

And though it’s not something I read, exactly, I was captivated by Mimi Mondal’s reading at the World Fantasy convention. Her work in progress follows a magical, traveling carnival through an alternate historical India. It had dancers, and lovers, princes, djinns, and goddesses. I can’t wait for this to be a finished thing that I can actually read.

Alisa Alering was born in the Appalachian mountains of Pennsylvania where she ran around barefoot and talked to the trees. Her short fiction has appeared in Mythic Delirium, Time Travel Tales, Clockwork Phoenix 4, Flash Fiction Online, and other places. She is a graduate of Clarion West (2011) and winner of Writers of the Future (2013).  Her "The Night Farmers’ Museum" was chosen by judge Robert Coover as runner-up for the 2014 Italo Calvino Prize. Her story "Madeleine Usher Usher" appeared in Aqueduct's Missing Links and Secret Histories: A Selection of Wikipedia Entries across the Known Multiverse. www.alering.com | @alering
Posted by Timmi Duchamp at 6:00 PM