Guest Post by Diantha Day Sprouse-- Part 1: Who Are Those Angry White People who Voted for Donald J. Trump, and What Do They Want? 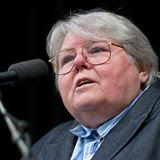 Who Are Those Angry White People who Voted for Donald J. Trump, and What Do They Want?

The 2016 election was fueled by class anger, an anger that has been slowly building for four decades. Many people were caught off guard and completely surprised by the breadth and depth of this long held slow simmered anger-- the anger that comes from thwarted dreams.

The people who hold this dream of a comfortable independent life know that Alexander Hamilton was right when he wrote, "He who pays is the master" and "A power over a man's support is a power over his will." The independence-minded middle class/working class wants no man to have power over their wills and wants to be beholden to no man.

During this past year I've been in conversation with two men who typify the working class/middle class. What they had to say reveals the anger and frustrations of people whose dreams have been stunted, people who are misunderstood. Danny M. is a young man who has a family to support and a full-time job. He wants a comfortable life for his family. Ray E. is a little older than Danny M. and more passionate in his support of Mr. Trump. Ray E. has a family and a full time job. He also works two part- time jobs to allow his family to flourish. Neither man would be described as working poor. Some of the things they have to say may illuminate what the middle class/working class is thinking, feeling, hoping and dreaming.

Danny described Mr. Trump's victory this way: "The middle class woke up. Voters who occupy 90% of the nation's land mass stood up and put their middle finger in the face of liberalism and said get the hell out of the way." When we look at the final vote tallies from the 2016 election we see that the center of the nation is colored red for Donald Trump the conservative candidate. If we look at the same map by county rather than state we see a map in which the rural areas are red and the cities are blue.

This is a middle class/working class that is acutely aware of the domestic issues in America. Ray E. says we need to take care of the following issues: "employment numbers, people dependent on assistance, economic health, and neglected infrastructure."

The middle class/working class believes that the restoration of independence and self-confidence in people's ability to take care of themselves will go a long way toward remedying the nations problems. Both Danny and Ray believe that both political parties forgot about the middle class/working class. Ray says he feels like a "forgotten person". Danny says he feels that perhaps he is "out of touch with modern thinking" and describes himself as a "traditionalist."

So why did so many of the middle class/working class vote for Mr. Trump?

The middle class/working class admires the rich but resents the professional white-collar class. Why? For the most part, the middle-class worker has little direct contact with the rich except through television programs. However, professional white collar managers order them around every day. Teachers are perceived to be condescending, patronizing, and generally unhelpful. When I was in high school the guidance counselor told me to "forget about college and just marry a farmer." Rich people are perceived to be independent, hardworking, and taking orders from no one. That perception is part of Donald Trump's appeal.

Middle class/working class people like people to speak their minds and to be open to the point of bluntness. Trump's blunt talk taps that working class/middle class value.

Middle class/working class men perceive themselves to have a manly dignity linked to their ability to take care of their families and themselves. Mr.Trump's persona as an independent man who can take care of his family and himself mirrors that value.

The middle class/working class has made it clear that they are putting both political parties on notice. Forget us again at your peril. If Mr.Trump does not keep his promises, Ray says, "I will be right there against him with the same enthusiasm that I had while putting him in office." Danny says, "Trump has the opportunity to expand or destroy the conservative brand. There is no in-between, so I have a VERY strong eye on him."

Diantha Sprouse earned a BA in psychology with a minor in women's studies from Ohio State University. She earned her MSE from the University of Wisconsin-Platteville. She is currently the sole proprietor of Heritage Hunters Genealogy Services. She resides in Arlington, Virginia with her spouse of thirty plus years and their dog Rex.
Posted by Timmi Duchamp at 4:53 PM