The Pleasures of Reading, Viewing, and Listening in 2009, Pt.20 : Lucy Sussex

The Pleasures of Reading 2009
by Lucy Sussex

A mixed year, this 2009, the last of the naughty-noughties. I have already written two different best-ofs for the year, in the capacity of my day-job as reviewer. What follows is a selection, with the bias towards women and the antipodes. The standout literary novels were Ursula K. Le Guin’s Lavinia (which I recommended in that section for the newspaper), and The Virtuoso by Sonia Orchard (4th Estate). Much has been written about the former, but less about the latter, so here goes: not many debut novels are truly outstanding. The Virtuoso is the rare exception, and has already won one prize. It draws on a real life: Noël Mewton-Wood was an Australian pianist, now forgotten, but in the 1940s–50s a major European performer. He was also gay, belonging to Benjamin Britten’s circle. Mewton-Wood would not be an Oscar Wilde but his end was tragic. His story is told by a narrator first fan, briefly lover, and then friend. For him, Noël is the love of a lifetime. Noël never loves him back, and so he fashions a portrait of the pianist as sexual butterfly. Finally he realizes the man’s passions did extend beyond music, but to a lover who is a clod in his comparison. The novel is structured and subtle, compelling in its reconstruction of a lost time.

Also worth ordering from afar is As the earth turns silver Alison Wong (Picador). The author’s great-grandfather was brutally murdered in New Zealand in 1914. He was likely a victim of anti-Chinese racism, and the case was never solved. But it has sparked this striking novel. The setting is Katherine Mansfield’s Wellington, but seen here from a very different perspective. Wong depicts inter-racial hate, but also love. Katherine is newly widowed, free from an oppressive husband; Yung a local greengrocer. They become friends, then secret lovers against a background of anti-Chinese agitation. An insane racist murders a Chinese man, but enjoys popularity even from the asylum. The novel also reminds us that New Zealand was a forerunner in women’s rights, as Katherine and her daughter gradually escape from domestic drudgery. Not least it is a damning portrait of sick Victorian values, the father fixated on his son, women only fit in his view for helpmeets.

I had not had much time for Lynne Truss, even though I too am a grammar pedant. However, Get Her off the Pitch (4th Estate) was one of those review books read carefully to the end, and not out of duty, either. It comprises is a memoir of being a fish out of water, a woman in a then male-dominated world. She was an unlikely choice as sports writer for The Times, being no fan of any sport. Her strength was that she could research, see the point, and write entertainingly about boxing, golf, etc. In every chapter of this book she dives in at the deep end, and arises with the subject neatly speared, if not filleted. The assignment of sport she took seriously, and also saw the funny side. Outsider status became a strength: she minced no words about preening personalities and dire work conditions. Four years of machismo and steep learning curves did burn her out, as did a family crisis in the middle of the 2000 Olympics. Yet it gave her this whip-smart, sassy book.

A bad year for travel books, said the bookshop staff, with the preference being to stay home and cook. Under the Huang Jiao Tree by Jane Carswell (Transit Lounge) should have not intrigued me, being about travel+spirituality. But the focus was less about the travel experience than about how it subtly changes us. Jane Carswell was settled into middle age as a New Zealand music teacher. She undertook the challenge of English teaching in China, and found herself walking a very different path. The experience of hard work, less comfort and immersion in a different culture resulted in a spiritual sea-change. She turned away from individualism and the material, ending up as a contemplative religious, a Benedictine oblate. Interesting even to atheists.

Biography, ooh a good year here. The Ghost at the Wedding by Shirley Walker (Viking) is a study of post-traumatic shock, and the effect on a family over decades. It succeeds in something very difficult: the fictionalizing of actual events. Walker writes a memoir of her in-laws which expresses both the political and personal. It presents a male and female perspective on Australia’s involvement in two world wars. The men fight, and return damaged; their women deal with the consequences. Two generations of young men are sacrificed to other people’s wars, and the effect on the young nation is appalling. A heartfelt, even savage evocation of an era. And the author is the mother of a rock star…

Equally skilled was The Lost Mother by former Ms editor Anne Summers (MUP), a detective story in art history, and also how very different lives can intersect. In 1933 Summers’ mother was painted by a young artist, Constance Stokes. The portrait was bought by a Russian émigré, the wealthy Lydia Mortill. Summers would eventually inherit it, sparking a search into the stories of Stokes and Mortill. One fought a now familiar battle between art and motherhood; the other could survive everything until the loss of her family to the Gulag. A beautiful book.

And from the archives, Catherine Crowe’s 1854 Linny Lockwood, a novel from the Victorian era by a noted Spiritualist and crime writer. This book was originally published the year of her spectacular nervous breakdown, where she streaked in the wintry street of Edinburgh after a séance. [I am not making this up!] Not perhaps as interesting as her ground-breaking crime novels of the 1840s, but it does have remarkably daring subject matter – two women are deserted by the same man, and the wife ends up nursing her husband’s mistress through her pregnancy. The novel features Crowe’s interests in women and the dignity of work. 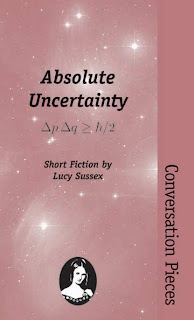 And for 2010, I have something for you, dear Aqueduct readers: Women Writers and Detectives in Nineteenth-Century Crime Fiction: the Mothers of the Mystery Genre is finally emerging from Palgrave-Macmillan, cross-fingers. And before I am hit with editing, I have returned to a novel ms, with quantum physics, women detectives, and er, werewolves.
Posted by Timmi Duchamp at 10:11 PM