Looking for the heat source 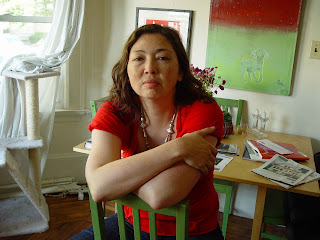 Bryan Thao Worra interviews Claire Light about Slightly Behind and to the Left for the Asian American Press here.

I can offer you a brief excerpt from the interview, to whet your appetite:

The first [story], "Vacation," takes place in the few months following the mysterious disappearance of all men from the world. There are still boys, but once they cross over some undefined threshold of manhood, they vanish too. In this new world, women become sexually predatory. When I'm writing a story, I'm looking for the heat source, the place where the story hits a sore spot, something that will make me – and hopefully the reader – really feel something.

The hotspot here turned out to be examining this sexually predatory dynamic between women and young teenaged boys. It's very taboo, and it was difficult and a little scary for me to go there, to get into the headspace of a woman who could become something violent and intrusive. And it was even more scary to make this story public after I had written it. Because at that point, the only other story I'd published ("Pigs in Space," which is also in the collection) also included a woman being violent. But I did it anyway.

The story got extremely positive – even exhilarated – responses from women. And I got a lot of confusion and veiled hostility from men, even close friends. (The most common comment or suggestion from male readers was to ask me to explore the absence of men more, to justify it.) And only then did I notice that most of the editors I was sending the story to, most of the journal fiction editors, were men.