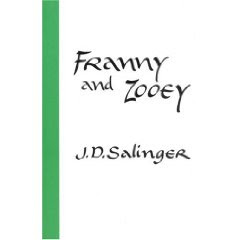 While the obits and appreciations of J.D. Salinger have mentioned all his published books -- there weren't many -- they've devoted the majority of their space to talking about The Catcher in the Rye.

But for my money, Franny and Zooey is his finest work. It's the one that always makes me cry at the end -- always, no matter that I've read it so many times that I know the ending by heart. (And, yeah, I know the two stories were originally published as separate pieces, but they belong together; put together, they are a novel.)

I first read Catcher in the Rye when I was 13, and it knocked my socks off. I read it again at 16, and was bored. If I were a good literary critic, I'd read it again now, to see how it looks in the light of age, but frankly, I can't bring myself to do it. Male teenage angst doesn't interest me much these days.

I was 19 or 20 when I first read Franny and Zooey -- about the same age as Franny in the book. I spent plenty of time at that age in my own state of spiritual angst -- in fact, at one point I dropped all my classes except one and moved into a commune that proved far more dysfunctional than the worst modern American family -- so it's not surprising that the story of a young woman running up against the dishonest contradictions of life would appeal to me. I might not have been carrying around The Way of the Pilgrim -- Zen Buddhism was more my style -- but I recognized the urge.

It's quite possible that Franny spoke to me more than Catcher simply because it was about a young woman. I don't think there were a lot of books available to me at the time I first read it in which a young woman was struggling in her soul with something more than a choice between men to marry. (I stumbled on Doris Lessing's Martha Quest books a few years later.) My own deepest funks were always more driven by something I found it hard to grasp or explain, and hers seemed similar. And Salinger, despite being a man in his mid-to-late 30s at the time he wrote it, seemed to actually understand what it might be like to be a very bright woman of 19 whose deepest urges did not seem to fit in anywhere.

One of the things that always got me in the book was how well it showed the sexist constraints of the society in which Franny lived. There she is, off on a date with a nice well-off young man set for a career on Wall Street or the like -- someone who will never question that making a good living and having the perfect home and family are the most important things in life -- and she's chafing at everything while still trying to be a lady. The scene that sticks in my mind is when the young man is out trying to hail a taxi, and doing a bad job of it. Franny, standing under an awning, is irritated by his incompetence. She allows for him -- "God, it would be terrible to be a man and have to get taxis in the rain" -- but she knows both that she could do it better than he's doing it and that she's not supposed to do it, much less be better at doing it.

Franny's angst is partly driven by the limits on her role in society, but it's larger than that. It's not all that different from the struggles her brothers have gone through, which is why Zooey is able to help her through it. And you have to credit Zooey with recognizing that Franny has depths, that she isn't just pining over some boy or pregnant or otherwise suffering the traditional calamities that befall young women; she's dealing with the same core questions he's struggled with himself.

Franny's struggles are affected by her gender, but the core issues -- how does one live a pure and honorable, even spiritual, life in a messy world that seems to deliberately undercut all those things -- have no gender. Perhaps that's another reason the book moved me so much, and still does.

Given Salinger's rather problematic relationships with women, it's rather amazing that he could write a story that showed a woman searching for spiritual truth and even suggesting the added burdens she might face in a sexist world. But maybe that's why it's better not to know all that much about a writer. The truth writers put down on a page is not made less true by the failures in their personal lives.

I mean, hell, if I could do things perfectly in my ordinary life, I wouldn't need to write.
Posted by Nancy Jane Moore at 8:02 AM

F & Z was my favorite, too, and still one of my all-time favorite books. I'd never really broken down why, though. So you gave me a big "Duh!" moment here. ;)

And the thing with Salinger being able to portray Franny with such knowledge and nuance, while being such a controlling misogynist himself ... well, look at Hemingway, who had two faces even as a writer: the Hemingway of The Sun Also Rises and the Hemingway of Hills Like White Elephants.

I think the truth is a state of mind that is impossible to maintain over a long period of time. So these great writers learned to roll all their strength and sweetness into one ball and tear it through in very short bursts -- usually in short stories, or in brief, famous passages in novels. Then, when it's spent, the training, the surrounding culture, and the sheer power they wield in the world as men with an educated audience overwhelms them again, and they live like people who never had those insights.

That's my guess, based on no real evidence. ;)

I hadn't really figured out why I like F&Z so much until I wrote the post myself. So it was useful for both of us!