More on Imagination/Space by Gwyneth Jones 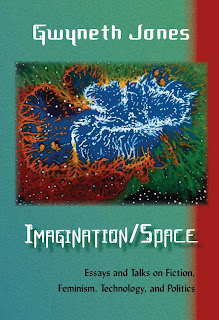 "The new collection...is characterized by...careful readings, sharp but unexpected insights, and passionate but wholly individualistic feminism...It's the sort of book that's rewarding to have around for browsing and idea-mongering....The longest piece, 'The Games,' is an absolutely brilliant discussion of video games, the nature of game-making in general, and the ways in which such games have infiltrated both fiction and film. It's the sort of thing that makes you want to invite Jones to a bar and sit down and talk with her about this stuff, while knowing that what you really want to do is listen."---Gary K. Wolfe, Locus, January 2010

I'm not sure what "wholly individualistic feminism" is (in the pages of Imagination/Space, Gwyneth refers to her feminism as an "awkward" kind of feminism, and also as her "plan for reducing global levels of machismo") and so don't know what I think about characterizing her feminism in that way, but as far as wanting to sit down with her and listen to her talk about the stuff in her book: I've done that a few times, and can only say Amen to that.
Posted by Timmi Duchamp at 4:00 PM