The Imaginarium of Doctor Parnassus I 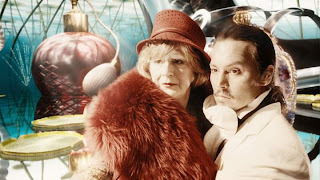 At some point in 2004, Patrick Nielsen Hayden observed that in a rational society, John Kerry would be the far-right candidate. Mutatis mutandis, an analogous point could be made about Terry Gilliam; but in a cinematic firmament where Almodovar and Zemeckis are stars, he's kind of stuck being a radical. Commentators who noted the irony of Brazil's having made it onto the National Review's Great Conservative Movie List rarely went so far as to note that even when it was first released, some viewers said, "Ah, he is ridiculing Great Britain for its Socialist System!" Of course, the oppressive state in Brazil is not a Leftist regime: it uses class divisions and consumerism to pacify the masses, in a fashion anyone can recognize in the U.S. and the West in general. And Gilliam's recent remark that Bush and Cheney totally plagiarized his movie makes perfect sense. But the anti-totalitarian position Brazil stakes out is not exactly congruent with what, in 1985 or the present, one might call a Left-liberal stance. A Reagan-era movie, written by an anti-Communist playwright, in which the forces of evil include unions and bureaucracy and Mom is doing something very different from, say, Thomas McGrath's or L. Timmel Duchamp's or Alan DeNiro's novels of oppression.

So if Gilliam is not a Leftist by the standards that have obtained in my lifetime, what is he politically? Consider that his literary touchstones include Dick and Spinrad; consider that "bureaucracy and Mom" are bêtes noires of Ken Kesey; and you'll see --what Gilliam is politically, is a hippie. He partakes of the New Left values outlined by Szalay and McCann, which I elaborated upon and sought to revise in my Afterword to Invisible Suburbs. Let me quote myself:

[Tom] Hayden characterizes what the 1962 student rebels saw themselves as opposing: "We were rebelling against the experience of apathy, not a single specific oppression . . . " . . . the student left saw their opponent [not as] advanced capitalism or imperial ambition, but regimentation, bureaucratic management, and postindustrial depersonalization, akin to Ken Kesey's "Combine." . . . It assumed moral autonomy and normalized middle-class experience in order to argue for a kind of self-realization, a mode of activism that is good for the individual psyche . . . the student left came to believe in a Romantic ethos of the lone man against "the System," of millenarian acts of conscience (culminating in the Days of Rage and the Weather Underground), in short, in voluntarism--what the great Marxist scholar/activist H. Bruce Franklin has styled "the bourgeois myth of free will."

The hippie attitude is very alluring to compassionate souls shocked by governmental outrages; hence Gilliam's remark on his expatriation to Salman Rushdie, "And I got more and more angry and I just felt, I've got to get out of here - I'm a better cartoonist than I am a bomb maker. That's why so much of the U.S. is still standing." But its emphasis on conscience and aesthetic at the expense, sometimes, of analytical commitments -- Hayden writes, "We studied the lyrics of Bob Dylan more than we did the texts of Marx and Lenin" -- leaves the hippie artist in great peril. And indeed, look at how many creators of major hippie books found that political position untenable and moved on. The authors of Mother Night and The Lathe of Heaven became the authors of Jailbird and Tehanu, respectively; i.e. Vonnegut embraced a more traditional Leftism and Le Guin a feminist perspective. Tom Wolfe and Steve Ditko became Rightists very early; Heinlein and Kesey were right-leaning Libertarians already; Harlan got into the habit of saying that no one is responsible for what happens to you but yourself; Dick became quite open about being able only to love those whom he regarded as broken or powerless, which may be okay for one's personal life but, as a political ideal, made him a pro-lifer and would have put him by Ralph Nader's side in the Save Terri Schiavo movement.

These authors' fates suggest that hippie politics are precariously balanced between Left and Right ideas of freedom and of responsibility. We shall see anon how Gilliam addresses that problem.
Posted by Josh at 5:32 PM

Always nice, living in a culture saturated with political mythology, to get a little reality check. Thanks, Josh. I'm agog to see where you go with this in your follow-up.