On Being the Token Whatever

Rereading Don Belton's Speak My Name, I found the following passage from the incomparable Robin Davis Gibran Kelley, an African-American historian whose work you should read:

I don't know how many times we've attended dinner parties where we were the only African Americans in the room . . . Our hosts always felt comfortable asking us "sensitive" questions about race that they would not dare ask other black colleagues and friends: What do African Americans think about Farrakhan? Ben Chavis? Nelson Mandela? Most of my black students are very conservative and career-oriented: why is that? How can we mend the relations between blacks and Jews? Do you celebrate Kwanzaa? Do you put anything in your hair to make it that way? What are the starting salaries for young black faculty nowadays?
. . . That they feel perfectly at ease asking dumb or unanswerable questions is not simply a case of (mis)perceived racelessness. Being a "nice Negro" has a lot to do with gender, and my particular form of "left-feminist-funny-guy" masculinity--a little Kevin Hooks, some Bobby McFerrin, a dash of Woody Allen--is regarded as less threatening than that of most other black men.

Thing is, for many ethnicities (broadly defined), anyone who's the sole representative of his/her group in a certain milieu gets to play "nice Negro" for it under some circumstances. I've been treated as the local Jew Informant since my childhood, when a school guidance counselor, Mr. Savage, asked me, "Hey Josh, is Chanukah the Jewish Christmas or the Jewish New Year?" Margaret Cho gets asked about Kim Jong-Il; in summer 2000, several people were asking me, "Hey Josh, whadday think about Lieberman? Are you proud he's on the ticket, huh?" "Why, 'cause he's a member of the short community?"

Now, I've never asked black people about their hair. Although, after having read Nisi's blog post on the subject, I was seized by terror that I'd combine the words "crinkly" and "nappy" and say to someone, "I'm glad you're so at ease with your hair being crappy." What happens to me, though, is that I get used to someone being an Ethnic Informant because they've volunteered information about their group or native land in conversation or in writing, and toss questions in their direction whether they want to answer that kind of thing or not. My friend Srimati from Calcutta once had to tell me, "I don't know how to pronounce 'Malayalam' any better than you do!" My friend Vince from Rochester, I have a more equitable relationship with: he answers the Gay Male Culture questions, I answer the Jewish American Culture questions, we're fine. My friend Sriram from Kerala is also pretty at ease with reciprocal exoticization, although he'll exoticize my whole country rather than my ethnicity: "I'm feeling perfectly at ease, and then I hear someone trying to pronounce 'Meera Nanda,' and I'll say, 'My God, I'm among foreigners!'" Or "How can people have such strong opinions on the relative virtues of The Band and The Grateful Dead, or The Beatles and Gershwin? It's all Western Music!"

There are, of course, different kinds of "dumb or unanswerable questions": the dumbest and unanswerablest are the ones that openly regard groups as monolithic entities, asking a person for "The black perspective" ("What do African Americans think?") or "The woman's perspective." Such phrasings are rarer than they used to be, but sometimes it becomes clear what the assumptions are once the question is answered: that is to say, I've seen surprise when I replied to "What does your Israeli mother think?" questions with "She said of the Occupation back in 1967, 'No good will come of it!'"

Closely related to the monolithic entity question is the "Surely you met in the Negro Club" kind of question. "I knew a Greek in Houston -- Argyris Crisopoulos! Ever meet him?" Or even "What's Zeno's third paradox again?" Turns out not all Greeks in the U.S. can answer either of those! I have once or twice met guys who seemed to think I knew all about media celebrities' chronic illnesses, as if that information comes with one's Crohn's Disease diagnosis.

In WisCon Chronicles 3: Carnival of Feminist SF (ed. the incomparable Liz Henry), issues of exoticization arise repeatedly, focusing on such problems as the privilege associated with being in a social role where one gets to demand explanations rather than having to give them: Shweta Narayan remarks, "Privilege doesn't mean you can't be fluent in another group's cultural frames, of course. It just means you don't have to be"; Shveta Thakrar explains, "Diversity means accepting and being curious in a respectful way about those different from you. It means not seeing I wear a bindi and asking me what it means, as though I were the spokesperson for all South Asians and their myriad traditions." In the course of outlining that "respectful way," she mentions having a friend who "just couldn't fathom" the fact that Thakrar didn't celebrate Christmas; as you might imagine, that's a cultural rift I've encountered too, most memorably from a Catholic woman I was dating twelve years ago who confronted me with "How can you deprive a child of Christmas?" And "I was thinking we could tell [my infant niece] that you were one of Santa's elves." Which in turn led to a hilarious attempt on the part of my mother to explain to her sister-in-law, in Hebrew, what "one of Santa's elves" meant. 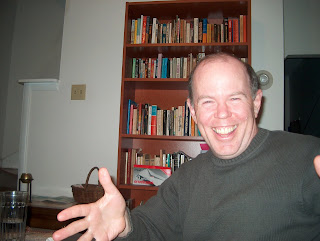 So a lot of tactics for staying "curious in a respectful way" amount to regarding people as individuals and being conscious that the majority culture isn't universal. And that no one has the duty to be your informant. And not using the prejudices you've absorbed from the news or entertainment media as foundations of your questions.

And refer all of your curiosity about the U.S. South to Rebecca Ore's brother Bob, pictured above -- the white Southern analog to Kelley's "nice Negro," he's very inviting.
Posted by Josh at 7:48 PM

Oh dear me yes. One of the more spectacular examples is being the token transsexual, in which circumstance everyone thinks they have the right to ask you about your genitals.

Thanks! Some of the "Bad Questions" apply to all sorts of minorities. Women with disabilities are another group that some people somehow feel at ease asking probing questions about their sexuality.

Oh hey, I just found Calpernia's reply to people who were affronted by that video. Evidently she got many letters from people complaining that there's nothing wrong with their Bad Questions. The road goes on forever and the privilege never ends.

Bob has a post office box so he can get his New York Review of Books without his neighbors thinking he's a Commie. Across the street, a neighbor flies a Confederate flag.

I am here to tell you it never, ever stops. The woman at the Y who congratulated on me exercising in my "native costume," which consisted of a tshirt and long skirt. I am from the far land of Kalamazoo, Michigan.

BTW, thanks for the stories. I have enjoyed (and importantly, purchased) your work.