Oh for a tricorder!

Last night I attended the fourth in the UW's public series of lectures in Astrobiology. Titled "Searching for Life," the lecture was delivered by Chris McKay a scientist from the NASA Ames Research Center in Silicon Valley who's worked on several planetary exploration missions, including the Mars Science Laboratory due to launch in two years. The lecture was held on the UW campus in 120 Kane Hall (which, for Marq'ssan Cycle readers, was used as a temporary jail in Alanya to Alanya), and there was a good turnout, mostly adults, of course, but at least some kids. (During the Q&A, a couple of geeky kids got to ask questions.) My ears pricked when Woody Sullivan, introducing McKay, mentioned that he is interested in ethical issues of planetary exploration.

The lecture was power-point driven, which made note-taking easy, of course-- though I always wonder, as I did last night, whether that format doesn't also have the tendency to make lectures a bit simpler than they would otherwise have been. Still, done well, simplicity can be elegant rather than reductionist, which in my opinion was the case here. In fact, the simplicity began with Sullivan's intro, which characterized astrobiology as seeking transdiciplinary answers to three questions-- What is Life? Where does Life come from? And Is there Life beyond Earth? (Needless to say, when I asked Sullivan about astrobiology when I met him at the Whitely Center a couple of years ago, his characterization was considerably more elaborate.)

This lecture focused chiefly on the search for "Life 2.0," looking at each of several sites in the solar system and evaluating their promise for delivering Life 2.0 or evidence that it once existed in those sites. Will anyone be surprised to hear there were quite a lot of references to sf, mostly Star Trek, most notably a picture of Spock and a quotation: "Jim, it's life, but not as we know it," and, later in the lecture, in answer to the question "How do we recognize alien life?" the reply "Use a tricorder" accompanied by an image of a Star Trek tricorder. (McKay then regretted that not only does science not know how the tricorder works, science fiction doesn't know, either.) The sites scored for the possibility of Life 2.0 were Mars (Score: 48 out of 100); Europa (score: 45 out of 100); Titan (score: 68 out of 100); Enceladus, that so cool moon of Saturn that sends jets of H2O out of its South Pole with a power equivalent to Old Faithful (score: 68 out of 100); and last--and as McKay would have it, unworthy of consideration and the least of all the sites considered, Venus (score: 39). It was also suggested it was possible that Life 2.0 (i.e., life that can't be placed on the tree of Life 1.0) could be found in extreme places on Earth (although as yet, it 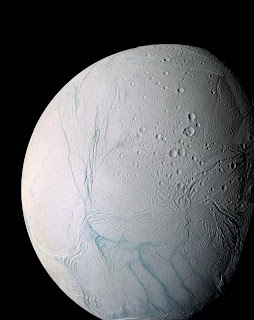 hasn't). McKay was most enthusiastic about Enceladus (see the image to the left), but noted ruefully that its distance from Earth makes it a tough sell to get funding for exploring it (though clearly he's working on it).

For me, the most interesting portion of the lecture was the last section, on the ethics of planetary exploration. McKay said that NASA's missions to Mars all follow the rule of being "biologically reversible" so that if life is discovered any organic material that has been transported there from Earth can be destroyed by exposure to ultraviolet radiation. (He likened this to be able to hit the "undo" button.) I felt a bit dubious when he said that it's not enough to find life, but we should 'help' it if we do ("whether it wants it or not"): but then he didn't make clear what he meant by "help"; he did, however, make reference to science fiction having educated him about this. (Again, the lack of specificity in which science fiction made me a bit uneasy.) He also mentioned "expanding life from Earth" (without giving enough elaboration to fit it into his ethics of planetary exploration). As for our possibly discovering alien microbes: he presented a sort of set theory of ethics in which he asserted that though Earth's microbes have a low moral status, if alien microbes are the sole representative of Life 2.0, they would have a high moral status. (He suggested a parallel with endangered species on Earth, and as we all know, many people in our world do not grant moral status of any sort to endangered species.) I'd like to believe that his ethical set theory would prevail, but when I think about the brutality and stupidity of moral systems in the US generally, I have little confidence that such a view would have much traction (since no doubt politicians would immediately assert their authority). Finally, McKay expressed consciousness of the ethical and environmental implications for how we do exploration on Mars or anywhere else. (Naturally I immediately thought of the Martian Chronicles...)

All in all, an enjoyable hour.
Posted by Timmi Duchamp at 3:54 PM

as a practicing biologist who's also a space exploration enthusiast and an sf reader and writer, I've given much thought to these issues. I discuss them at length in my book, The Biology of Star Trek and also briefly in a 6-part article, Making Aliens. I gave early versions of this article as talks to several venues where I intersected with Chris McKay, Stan Robinson and others with intersecting interests (Mars Society, Planetary Society, branches of the NIH and NASA).

"Making Aliens" is excellent! Thanks very much for the link. By the way, Maureen McHugh's Mission Child takes on the problem of chirality. (It's also a wonderful book.) You might want to check it out.

Very glad you enjoyed Making Aliens! I will look for Mission Child, thank you for the recommendation.