Because novels have more entropy

The latest issue of Science Fiction Studies, a special issue titled "Science Fiction and Sexuality," arrived in mailbox this week. I expect I'll be posting on the issue itself soon, but in the meantime, I thought the many contributors of The WisCon Chronicles, Vol. 2: Provocative Essays on Feminism, Race, Revolution, and the Future would like to know that the issue includes a lengthy, strongly favorable review of WCC2 by Jane Donawerth, one that mentions nearly every contributor in the book. Here are a few excerpts from her review:

Contributions range from some outstanding academic essays, to interesting reflections by writers, to a workshop on responding to misogyny or racism in writing workshops, to a blog....

I shall begin with the threads that the hold the volume together, then review the high points. The guests of honor, Laurie J. Marks, and her 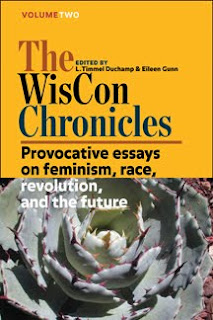 editor and also a writer, Kelly Link, interview each other about fantasy writing to open the volume and conduct a dialogue on sf to close it.... Writers might be interested in their description of the process of revising and editing, here in Marks's words: "When you're editing, it only affects the particular piece you're working on, but when you're revising, if you change something it changes everything." Scholars will be interested in Link's description of "communal writing," sf writers sitting in a cafe and writing in parallel; she cites herself, Shelley Jackson, Holly Black, Kim Stanley Robinson, and Karen Joy Fowler. At the end of the volume, in an epistolary exchange conducted by email, Link and Marks leave analysis behind and give us pure pleasure, ruminating on the nature of writing, but also on their friendship and the nature of friendship in general. Here are two good quotations from that exchange. In a sentence only a lover of science fiction could have written, Marks tells us, "I think novels need a higher coherence quotient because they have more entropy." On the nature of writing, Links adds, "I want the story to have enough momentum so that at the moment of ending, it's as if the reader has been hurtling along, picking up enough speed as she goes that she keeps on going past the point where the story ends."

The review then goes on to describe and discuss the material between the opening and closing pieces. And then Donawerth closes the review with this:

I would recommend this volume for anyone who has attended WisCon, for scholars and readers interested in the nature of conventions as a forum, for general readers interested in the liberatory end of sf, and for libraries that emphasize popular culture. While I have never been to WisCon, this volume makes me want to come see what all the fuss is about.

Posted by Timmi Duchamp at 5:25 PM